What Is The Most Recent Thing That Scientists Have Discovered? 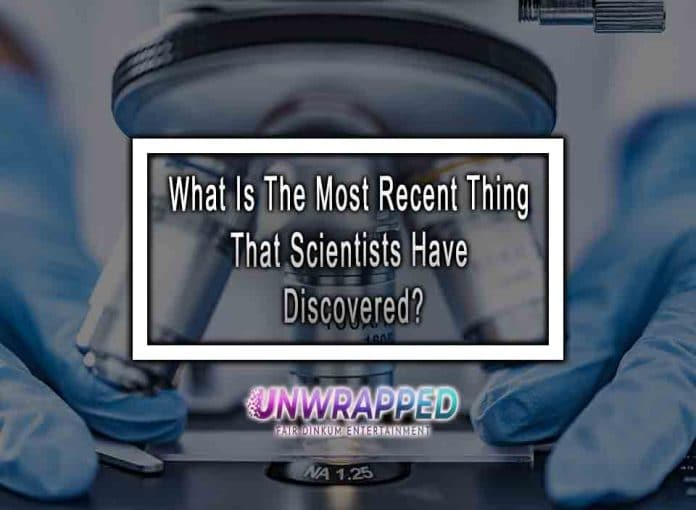 Every day, the earth rotates, circling our parent star and gently churning about the center of our galaxy, following the physics rules. Those rules weren’t always understood. They’re virtually breaking news in the extensive scope of the human experiment. One of science’s great gifts is the potential to enlighten and modify the world around us. Science continues its mission of finding new information, producing discoveries, and breaking new ground.

Every day, scientists and researchers worldwide work to fill the information void we were born into. When science is understood or acknowledged, it is at its finest. We wouldn’t be able to report on every discovery, innovation, or invention produced in a single day, much less a month, but that shouldn’t deter us from trying. In this post, we will acknowledge the most recent scientific discoveries.

See This: The Science Behind Procrastination What Happens to Your Brain

Mercury used to be a considerably more dangerous location to visit. It’s still not perfect, with severe temperature differences between day and night. While we emulate Mercury’s surface during the last four billion years, Kevin Cannon of the 53rd Lunar and Planetary Science Conference says the planet’s surface may be encrusted with minuscule diamonds. Mercury While we wouldn’t want to live there, we think it’s worth a trip for some treasure-seeking. Was engulfed in a worldwide magma ocean during its early stages of creation.

Graphite evolved within the lava and ascended to the top, forming a hundreds-of-meter-thick floating graphite crust. The first billion years following the solar system’s birth were littered with asteroid collisions. It might have quickly transformed that graphite into diamond. It would not be the huge, clear jewels we’re used to seeing in jewelry, unlike diamonds on earth. Instead, the surface would have been strewn with tiny diamond particles. Future missions to Mercury may reveal more about the planet’s surface composition, but if these calculations are true, Mercury might have a diamond hoard sixteen times the size of earth’s.

Medical technology and treatment have advanced dramatically in recent decades, yet, like most things, nature may improve on what humans can achieve. Nematodes are straightforward creatures, so fundamental that they are frequently used as model organisms in the study (NCBI). Yet, the worms have a sophisticated sense of smell that they utilize to explore the environment. That sense of smell appears to be fine-tuned for detecting specific malignancies.

The worms were put to potential work identifying cultivated lung cancer cells by researchers collaborating with the National Research Foundation of Korea. Their “worm-on-a-chip” technology consists of a small rectangular elastomer piece with a chamber cut out of its inside. The worms are put in the center of the board and can choose between two pathways. There are healthy cells on one end and malignant cells on the other. According to the researchers, the worms were effective in moving toward the malignant sample 70% of the time.

Stonehenge has been a potential source of mystery and wonders for decades, with several theories about how it was built and used. We may have finally found an answer. According to Professor Timothy Darvill of Bournemouth University, Stonehenge may have functioned as a solar calendar, with portions of the monument equating to days or weeks. The ancient calendar is constructed slightly differently from our modern calendar. Each stone represents a single day in a month and is divided into three weeks, each of which has 10 days.

That simple system worked for day-to-day tracking, but they had to make some changes to align it with the Sun’s motions. A five-day extra “month” was added, as well as stones to monitor an additional day every four years to accommodate the leap year. Hence the winter and summer solstices are always framed by the same set of stones. It would have provided a dependable frame of reference for Neolithic Europeans to adjust for any inaccuracies in tracking days throughout the year.

The hunt for planets and life outside our solar system is a relatively young astronomical development. It wasn’t until 1992 that the first verified exoplanet was identified (per Space). Although that exoplanet discovery is still in its early stages, the field has evolved significantly. Hubble, TRAPPIST, and JWST have allowed humankind to look deeper into our cosmos and back in time. The number of verified exoplanets has continuously increased thanks to robust tools and constantly improved detection methods and processes, to the point where planets are no longer added to the registry individually but in batches.

NASA received the recent batch of verified planets on March 21, 2022. The batch contained 65 new worlds, bringing the total number of exoplanets to over 5,000. Hot Jupiters, gas giants circling close to their parent star, make up a significant fraction of the exoplanets identified.

This appears to be a result of our observing techniques and not necessarily reflective of the most prevalent sorts of planets. Multiple observations are usually required to confirm that they were not anomalies or experimental mistakes. We’ve also discovered super-Earths, mini-Neptunes, and other unusual planetary kinds (per NASA). If current trends continue, we’ll pass the 10,000-planet milestone before we realize it.

In the upcoming day, scientists are prone to make discoveries in the biological sector. The UN Convention on Biological Diversity’s next conference, initially slated for 2020, is set to take place in Kunming, China, from April 25 to May 8. Still, concerns over the Omicron strain of SARS-CoV-2 might derail those plans. An estimated one million plant species are on the verge of extinction due to habitat loss and other human-caused causes. So, new surprising discoveries are on the way. We hope you must acknowledge everything regarding recent scientific discoveries.

Stay Connected
41,936FansLike
5,685FollowersFollow
820FollowersFollow
Previous article
What Are 500 Internal Server Errors & How To Fix Them?
Next article
Cases Of Monkeypox Confirmed In Singapore And South Korea, What’s Happening?