Top Reasons Why Water Pipes Leak on the Gold Coast 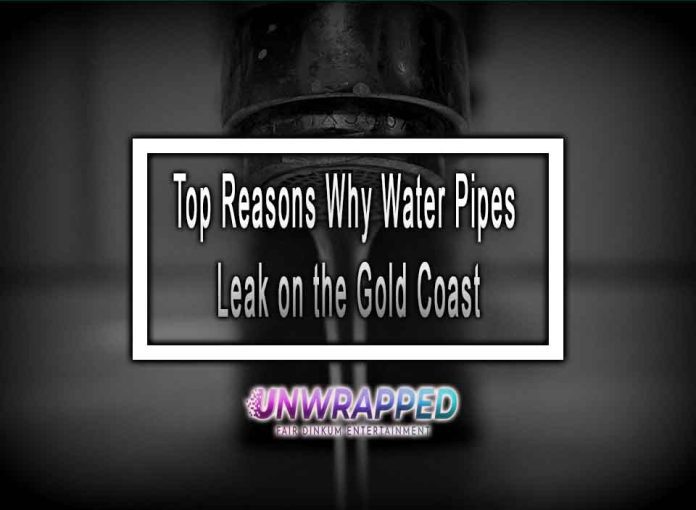 The Gold Coast is an amazing place to live, with near-perfect weather all year and incredibly beautiful beaches nearby. But even homeowners who live in paradise have to deal with plumbing issues, including leaky pipes. While they don’t burst because of freezing temperatures like they do in so many colder places in the world, even a small water leak can be a major problem. If you do experience such a problem, our Gold Coast plumbing experts can help you fix it. In the meantime, knowing what causes leaky pipes on the Gold Coast can help you prevent them from actually springing a leak.

If you own a newer home on the Gold Coast, you probably don’t need to worry about rusty pipes, since most new plumbing includes PVC or rust-resistant copper pipes. But if you live in an older house, rust could be an issue. As you know, water causes metal to rust, so if you have metal pipes, they will eventually corrode and the rust will eat holes in your pipes. And, obviously, holes in water pipes aren’t good.

The only way to repair rusted pipes is to replace them, which is probably a good idea anyway since eventually, all metal pipes will rust. These days, you can easily have your old metal pipes replaced with rust-proof PVC pipes or rust-resistance copper pipes to prevent them from corroding in the future.

Trees are wonderful. They provide shade on those hot summer days, offer privacy, and make the landscape look beautiful. Unfortunately, they also have roots that can get into your water pipes and keep growing until they actually cause the pipes to burst. Now, you’ll usually notice a blockage in a pipe before it gets to the point where it actually bursts, but if you ignore a slow or clogged drain long enough, your pipes will spring a leak when the roots grow too large for them to be contained.

You don’t have to cut your trees down, though. This problem can be mitigated by having your pipes cleaned yearly or whenever they become partially clogged. You shouldn’t wait until they’re fully clogged to get them cleaned because often, this will happen at a time when you really need your drains to work properly. A bit of preventative maintenance will go a long way in keeping your pipes in good condition.

The water on the Gold Coast is considered “hard,” which means it has small amounts of various minerals in it that can cause a build up of mineral deposits along the walls of your water pipes. These minerals do not harm you in any way, but they can lead to other pipe issues like corrosion and higher water pressure, both of which can cause your pipes to get holes or to burst. Just as it’s a good idea for you to get your pipes cleaned for roots on an annual basis, it’s also beneficial for you to clean them to keep the walls clear of mineral buildup.

Just because the Gold Coast doesn’t get freezing weather doesn’t mean your water pipes won’t ever burst or leak. Take care to properly maintain them, though, and you won’t have to worry about water damage from faulty pipes.

Romantic Places In Adelaide To Visit For Couples!

Top Rated Things To Do In Port Douglas