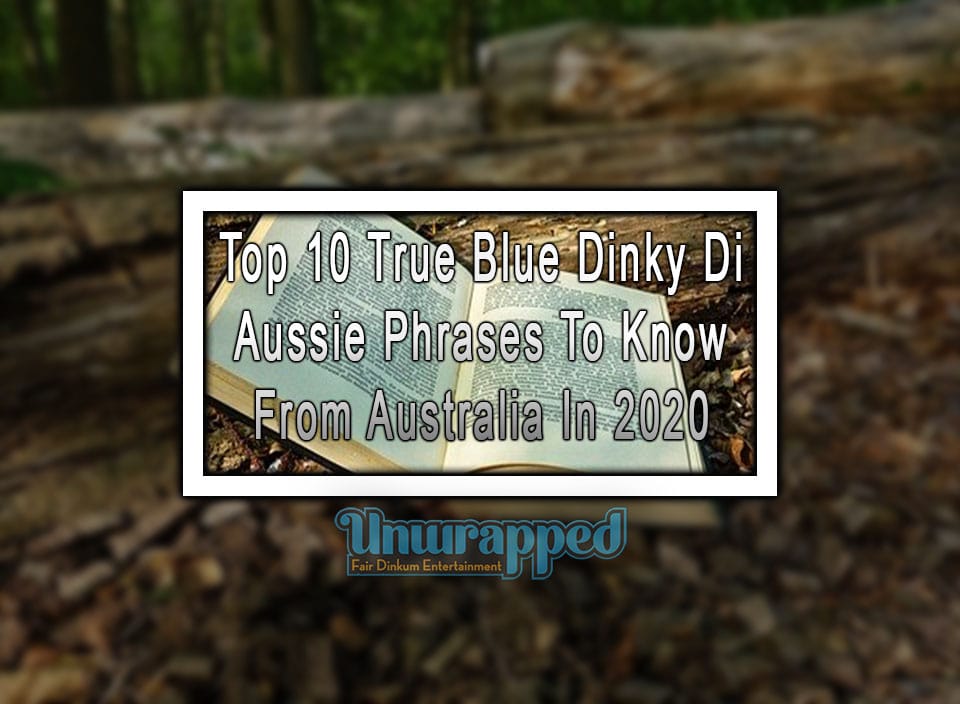 The Blue Dinky Di Aussie phrases are usually not much different from the slangs around the world. Tourists can learn Aussie slangs easily. Different slang words, local names, phrases and terms used in Australia by locals, are usually a short form of anything. The slang dictionaries of Australia contains words or sayings which are particular to a specific area in the country. Some of these slang have also become out of use. In this article, we have covered the Australian slang which is commonly used throughout the country and majority of the Australians know about them. The slang used by Australians can be somewhat rude or politically incorrect.

1. Hit the Frog and Toad

One of the most used Australian slang phrases is ‘Hit the Frog and Toad’. This phrase means that you have hit the road, now get out of here. It is different from another very commonly used phrase that is having a frog in your throat which means that you have a sore throat. Although most of the locals of Queensland and the Territorians organize whacking day putting which is against the spreading plague of cane toads, this phrase is not even related to it. It is not dread of finding a lot of toads. Instead, its meaning is just as simple as hitting the road.

This phrase was made famous by the former Prime Minister Kevin Rudd. The phrase Fair go, mate. Fair suck of the sauce bottle. Fair crack of the whip is used when you want to be treated fairly. The ex-Prime Minster used this slang phrase to speak to the electorate. Within this phrase, the word ‘Fair suck the sauce bottle’ was actually coined by the struggling local Australian families. These families were in such conditions that they had to share the droppings of tomato sauce to add flavour to their meat. Due to this hard life, all they wanted is equitable suck, hence fair suck the sauce bottle. When these families were infield, they needed a fair crack of the whip.

Have a go, you mug is one of the most used Australian slang phrases. This phrase means that you are not putting all of your efforts or you are not taking the risks. This actually is a favoured call for all of the people who watch sport from budget seating. This term is used usually in sports, in cricket where batsmen sometimes block the ball a little too much, or during football when the team is not trying to score the goals.

Usually, our Aussies do not trade a lobster or pineapples, but there is always one of the friends or relative who calls at an unusual time to ask to lend a lobster or a pineapple. No, you have not understood it. It basically is about money. In Australia a $20 note is sparkling red in colour which is the colour of a lobster. A $50 note is bright yellow in colour which is the colour of pineapple. The $100 note has a blue-grey colour and is named after a shark, grey nurse. This phrase just means asking for loan. The $5 note is referred to as Pam Shriver and a $10 note is referred as Ayrton Senna, which is the past sporting stars.

It rather is a rude phrase used in Australian slang, but it is one of the most commonly used Australian slang phrases. When you have nothing to say to someone or you don’t have anything to do with him or her, you tell them ‘onya bike’ which means he should leave now. This term is almost opposite to the phrase hold your horses, which means to ask someone to stay or have patience, which is very similar to some other phrases like ‘keep your pants on’ or ‘do not get your knickers in a knot’. When you tell someone ‘onya bike’ and he still has not completed his story or something, you bid them with ‘tell your story walkin’.

7. Oi For Drongos And Galahs

Normally this phrase is being said to people when you disagree with the person. It is also chanted three times after ‘Aussie, Aussie, Aussie’, making it one of the cheesiest national cry in the world. This phrase means you are conveying your annoyance or trying to get someone’s attention. Oi for drongos and galahs is a now our go-to term for shutting someone up. When you are being a drongo or a galah you usually do not understand what you are doing.

Read More: Australia’s Top 10 Phrases for 2020 be Australian for the Day

8. Six of One, Half a Dozen of the Other

When there is a 50-50 odd or any situation which has a 50-50 chance, then Aussies say ‘six of one, half a dozen of the other’. This phrase unlike how it looks like is not related to the phrases including ‘damned if you do, damned if you don’t’, or ‘caught between the devil and the deep blue sea’. The phrase means that whatever decision you make, will not affect the outcome of the situation. In any case, you will end up with at least half a dozen, no matter what decision you take.

‘Do the Harry’ is Blue Dinky Di Aussie phrase used when you are asked to ‘get the hell out of here’ or ‘mosey on’. The phrase is based on a real incident which took place on Victoria’s coast in 1967. Some say that he did the bolt from the responsibilities of a Prime Minister. There are different rumours about the Prime Minister, some say that he was abducted by the Chinese Submarine or even UFO. But one of the most likely explanation is that he was caught in deadly currents and was washed out of the sea from Cheviot Beach near Portsea. In any case, his body was never found out, so anyone who needs to get disappeared is referred to as Harold Holt or Harry and told as ‘Do the Harry’.

10. Throw a Shrimp on the Barbie

Throw a Shrimp on the Barbie is an interesting phrase as it means that you want to invite someone for lunch at your house. Because Australians don’t cook shrimps for un-important people or we can say Aussies throw shrimps only for Barbie. This phrase was initiated by Paul Hogan when he invited countless tourists to come over for lunch.

When people listen to the Australian slang for the first time they get surprised as to how much sweet it is and adults feel no shame in telling them to the kids. Australians love to use their slang phrases, and there is no Australian on the planet who has not used at least 2 to 3 slang words during his life. It is a unique feature of Aussies to use slang for over three centuries.

What does true blue mean in Australia?

Top 10 Reasons to Visit the Birthplace of Australia, Sydney in...

Amazing Facts About Ancient Egypt that You Didn’t Know