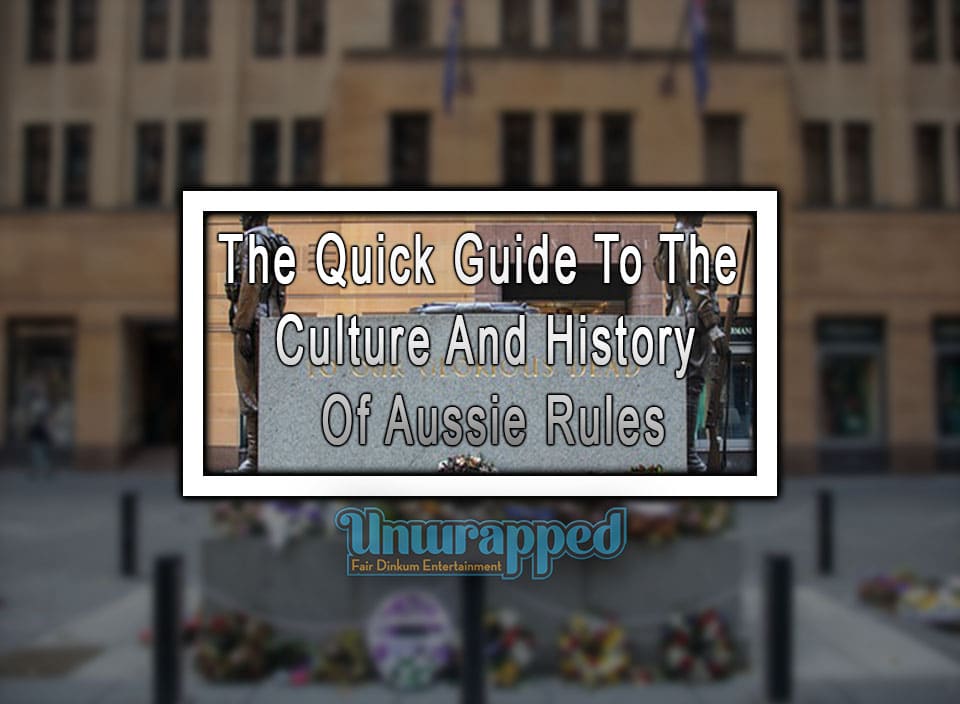 Aussie Rules – History and the Culture

Australia is the country with a diverse and fascinating culture and Aussie history. It starts from the Aboriginals population which dates back to many thousands of years. Today Australia is one of the largest countries though it is the smallest continent, situated between the Pacific Ocean and the Indian Ocean. It is located in the southern hemisphere. Australia’s capital is located on the Southeast side and is called Canberra.

The mainland of Australia extends from West to east nearly 4,000 kilometres and from north to south nearly 3,200 kilometres. To the south of Australia to the southern extremity, there is the Island of Tasmania, similarly, in the north, it extends to Papua New Guinea.

Aboriginal Australians have been marking their presence in the country for the last 50,000 years. So it is not wrong to say that they perhaps are the oldest living cultural history in the globe. At the time when the first time the British arrived in the land of Australia, there were as many as 250 different languages spoken across the nation. Also, between 300,000 and one million Aboriginal people were living in Australia.

The discovery of gold in Bathurst first and then Ballarat in 1851 made Australia a desirable location. The year of 1854 saw Eureka Stockade in Ballarat and some crucial events in the evolution of Australian democracy. About 50,000 Chinese immigrates arrived and established many Chinatowns.

By the end of World War II and the Vietnam War, the influx of many migrants to Australia happened. The Snowy Mountains Schemes employed around 100,000 people. Most of them around 70% were migrants from 30 different nations around the world. So now people from all over the world started calling Australia as their homeland. This mixed culture of Australia can be seen in many aspects of the Australian lifestyle hence New Arrivals and Multiculturalism is their culture.

People living in Australia have odd Australian Etiquette and Customs they are generally not formal and have a casual and laid back attitude. They generally use the first name to introduce themselves and shake hands when they meet any other person. Generally, gifts are exchanged on birthdays and Christmas. It is in their culture to open the gifts usually in front of the givers as and when received. It is generally polite to phone ahead to see if the host would like you to bring something along with your alcohol.

In Australia they have a strong secular government; religious organization plays a very crucial role in the life of the people. The Christian churches significantly have played an integral role in the development of education, health, and welfare services. The Roman Catholic churches are the largest non-government provider of health and education to people.

Anzac day is on 25th April and it was started by veterans, its symbolic meaning is different from that of the military days around the world. This day does not glorify war. It is simply a Tradition of Aussie it’s just time to remember what was meant to those involved in it. Melbourne Cup is a day of high fashion, drinking, and gambling. Generally, it’s a public holiday. It involves sweep, hat competition and a few glasses of champagne. Another celebration is that of Christmas. Seafood and wine have replaced turkey and egg, the Christmas tree is less important. What is important is the Christmas drink.

Wine is very much part of Culture And History Of Aussie. Depending on your views, the Australian style is benefited or harmed by a lack of restrictions. They add many other ingredients than just the juice of grapes to their wine to make it taste good. If the season is poor they just import the grapes from neighbouring areas and mix it with local variety. Even they add strawberry or coconut essence to increase the complexity of the wine.

Australia is majorly influenced by its early culinary culture. The risk of bacterial contamination due to its hot climatic condition forced meat to be turned into charcoal before it becomes safe for human consumption. The prevalence of flies present in the area deterred people from leaving the meat to dry into jerky or let it dry into salamis. Not only has this but lack of refrigerated transport in many areas made it difficult for the farmers to keep the market with niche products.

Food and Entertainment in Australia

There is a stereotype that Australian men dance like Frankenstein. Their lack of rhythm and stiff knees has many of them resembling a chicken or jack in the box bouncing from one side to another. Other men just watch over the dance floor with a beer in hand. It may surprise you but Australians are away from the techno night club, they have created a unique dance genre that is popularly known as New Vogue.

Australia is not very fashionable at all. Rather it is generally accepted that Australia is the only country where people dress down. Despite the lack of aesthetic appeal, Australians have produced a great array of quality apparel. Another great fashion appeal is their hat. This was perhaps invented by Aboriginals droving hands wanting to keep flies off their faces. Melbourne cup day is one of those few days when the look plays a very important role. The basic rule for women is larger the hat and shorter the skirt.

Like Kangaroo and Emu which is the part of their national symbol they cannot walk backward, hence they were included as a metaphor of a great Australian trait to leave behind the baggage of the past and optimistically look forward to the future that’s the culture and history of Aussie.

Also See : Top 10 Indigenous Places in Australia to Visit in 2020

What is Australian rules football culture?

The Australian rules football sport is distinctive to Australia and was the first sport with a dedicated code of play. It originated in Melbourne, Victoria’s capital city, in the late 1850s and was initially known as Melbourne.

Stay Connected
52,667FansLike
5,669FollowersFollow
828FollowersFollow
Previous article30 Places In The Outback You Need To Experience on Your Bucket List
Next articleThe Quick Guide To The Culture And History Of Australian Cricket