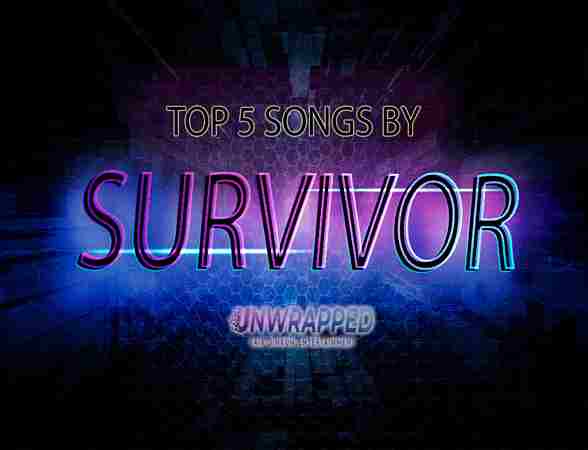 We know how excited you are to be swept away by music through Survivor‘s Top 5 Tracks. Australian Unwrapped would like to give you first a glimpse of the life of the artist. Enjoy reading and listening!

Who are Survivor: Jim Peterik and Frankie Sullivan composed the American rock band Survivor in Chicago in 1978. They were best-known for their double-platinum-certified 1982 hit “Eye of the Tiger”, the theme song of the movie Rocky III which stayed at the #1 spot for six weeks in the US. The band continued to produce chart-topping singles like “Burning Heart” (US number 2), “The Search Is Over” (US number 4), “High on You” (US number 8), “Is This Love” (US number 9), and “I Can’t Hold Back” (US number 13).

Peterik was also inspired to change the band’s name because of his narrow escape from death when he was unable to attend a Chase concert scheduled for Jackson, Minnesota on August 9, 1974. Bill Chase and most of his band were killed in a plane crash that he wasn’t on.
Bickler and Peterik both worked as jingle singers before forming the band.  Peterik sung the Beach Boys’ “Good Vibrations” in a Sunkist commercial.

We freaking love music here at Unwrapped, and we adore Survivor. In our humble opinion, here are the BEST FIVE SONGS by the legendary Survivor (most liked, listened and downloaded songs) across the web!!!

Eye of the Tiger

Rising up, back on the street
Did my time, took my chances
Went the distance, now I’m back on my feet
Just a man and his will to survive
So many times it happens too fast
You change your passion for glory
Don’t lose your grip on the dreams of the past
You must fight just to keep them alive
It’s the eye of the tiger
It’s the thrill of the fight
Rising up to the challenge of our rival
And the last known survivor
Stalks his prey in the night

Two worlds collide
Rival nations
It’s a primitive clash
Venting years of frustrations
Bravely we hope
Against all hope
There is so much at stake
Seems our freedom’s up
Against the ropes
Does the crowd understand?
Is it East versus West
Or man against man?
Can any nation stand alone?
In the burning heart
Just about to burst
There’s a quest for answers

The Search Is Over

How can I convince you
What you see is real?
Who am I to blame you
For doubting what you feel?
I was always reachin’
You were just a girl I knew
I took for granted
The friend I had in you
I was living for a dream
Loving for a moment
Taking on the world
That was just my style
Now I look into your eyes
I can see forever
The search is over
You were with me all the while

I Can’t Hold Back

Ever Since The World Began

I’ll never know what brought me here
As if somebody led my hand
It seems I hardly had to steer
My course was planned
And destiny, it guides us all
And by it’s hand we rise and fall
But only for a moment
Time enough to catch our breath again
And we’re just another piece of the puzzle
Just another part of the plan
How one life touches the other
Is so hard to understand
Still we walk this road together
We try and go as far as we can

I hope you enjoyed listening to Survivor !