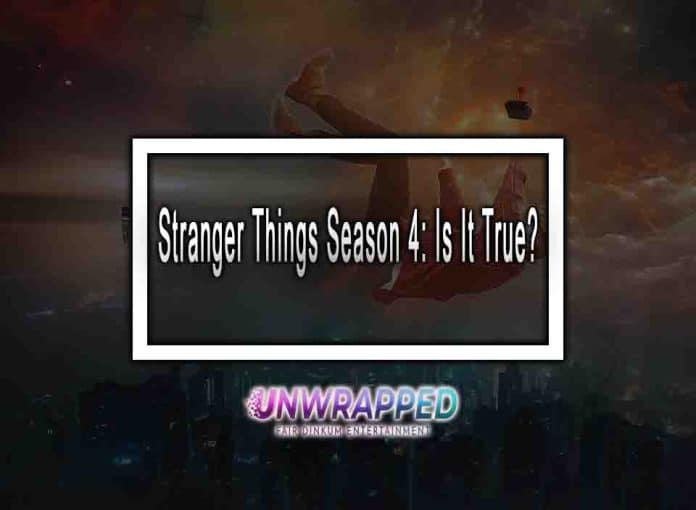 Stranger Things 3 has left a lot of unresolved questions. Fortunately for supporters, a fourth season is already in the works. There’s already a teaser for it on Netflix. For the time being, the specifics are few, but we’ve compiled all we know about Stranger Things 4 thus far.

Volume 1 will contain the first seven episodes of the season, published on May 27. The remaining episodes will be available in Volume 2 on July 1, increasing the total number of Stranger Things episodes to nine — NINE — in just a few days. There are nearly 13 hours of Upside Down deliciousness in those nine episodes. What’s even better? Volume 2’s final two episodes clock in at over four hours. (For the real geeks, Episode 407 is 1 hour and 38 minutes long. Episode 408 is roughly 1 hour and 25 minutes long, and Episode 409 is over two hours long.)

Following the Battle of Starcourt, we last saw our beloved Hawkins inhabitants, who had gone their own ways. When the story picks up six months later, the heroes, Eleven (Millie Bobby Brown), Will (Noah Schnapp), Mike (Finn Wolfhard), Dustin (Gaten Matarazzo), and Lucas (Caleb McLaughlin), must figure out how to halt the Upside Down while navigating the high school ups and downs. But the drama isn’t limited to Hawkins; it’s also taking place in Russia, California, and other areas. No one ever claimed to be a demon slayer was easy.

Check Out: We Recap Stranger Things Seasons 1–3 in a Handy A to Z

Stranger Things 4 is officially coming to Netflix, and there are two release dates (surprise!). Netflix revealed this week that a massive fourth season will be split into two parts, with Volume 1 premiering on May 27. Volume 2 will be released on July 1, so fans will not have to wait another long time.

“With nine screenplays, over 800 pages, over two years of production, hundreds of visual effects shots, and a runtime nearly twice as long as any previous season, Stranger Things 4 was the most difficult season ever, but also the most rewarding,” series creators Matt and Ross Duffer wrote in an open letter to fans. “Everyone involved is ecstatic with the outcomes, which we can’t wait to share.”

The first teaser for the forthcoming season, released in August, previewed new scenes from the following season, which featured Eleven—with bangs!—and the group in perilous situations.

We’ve put up an entire cast and character list for Stranger Things Season 4 so you can get caught up. But expect to see Eleven (Millie Bobby Brown), Mike (Finn Wolfhard), Dustin (Gaten Matarazzo), Lucas (Caleb McLaughlin), Max (Sadie Sink), and Will (Will Ferrell) (Noah Schnapp). Oh, and since we’ve been waiting for this new season for so long, we’ve put up a timeline of how the Stranger Things kids have grown up.

Sink recently revealed to the press that Stranger Things Season 4 will have the highest stakes the program has ever had. We’re not sure if this implies The Upside Down is becoming a global threat or if it signifies something else.

Steve (Joe Keery), Nancy (Natalia Dyer), Jonathan (Charlie Heaton), and Robin (Maya Hawke), as well as Joyce (Winona Ryder, one of our selections for best TV parents) and Hopper, will all return.

Variety(opens in new tab) has announced the addition of eight additional cast members, beginning with horror legend Robert Englund. Yes, the creator of Freddy Krueger will appear on Stranger Things. According to the source, Englund portrays “Victor Creel, a difficult and intimidating person who is imprisoned in a psychiatric facility for a heinous crime in the 1950s.”

Also, See: The Early Episodes Of Obi-Wan Kenobi Are Based On The Best Of Classic Star Wars

Other new features include: Dmitri, a Russian jail guard, is played by Tom Wlaschiha (Game of Thrones), and Lt. Colonel Sullivan, played by Sherman Augustus (Into the Badlands), who is eager to rid Hawkins of evil for good. Jason Carver, the privileged boy at school, is played by Mason Dye (Bosch). Carver appears to have a perfect life, but it’s about to be ripped apart by something inexplicable in a genuine Hawkins manner. Yuri, a Russian smuggler, is played by Nikola Djuricko (Genius).

The Duffer brothers unveiled four new cast members for Stranger Things season 4 at Netflix’s Geeked Week. Amybeth McNulty, the star of Anne With an E!, is in charge of the ensemble (another Netflix show). Vickie, a cool, fast-talking band nerd who attracts the attention of one of our favourite characters, is played by her.

The following are the others:

Patrick is played by Myles Truitt, a Hawkins basketball star with friends, skill, and comfortable life… Until surprising occurrences put his life into a tailspin.

Ms Kelly is played by Regina Ting Chen, a popular guidance counsellor. The latter genuinely cares about her pupils, especially those struggling the hardest.

Hawkins High’s star cheerleader and most famous student, Chrissy, is played by Grace Van Dien. But there’s a terrible truth lurking underneath the supposedly flawless exterior.

In terms of historical characters, Brenner (Matthew Modine), who “raised” Eleven in the Hawkins National Laboratory, is a crucial figure in the Stranger Things universe. In the storyline part, we’ll talk about him.

Season 4 Of Stranger Things Has A Release Date.

Season 4 of Stranger Things is divided into two “volumes,” but not into halves. The first seven episodes were released today (Friday, May 27), and the final two episodes will be released on July 1.

Will Season 4 Of Stranger Things Be The Final Season?

Ross Duffer’s response was, “Season four won’t be the end. We know what will happen in the end, and we know when it will happen. [The epidemic] has allowed us to plan ahead and see what would work best for the play. We were able to better understand how long we needed to convey the tale after we started filling it out.” For fans, this is fantastic news. So here’s to Season 5!

In 2017, Levy previously told Entertainment Weekly, “We’re absolutely going four seasons, with a fifth season very much a possibility. Beyond that, I’m not convinced.”

You May Also Like: Two Key Roles Are Cast In The Disney+ Series “Percy Jackson.” Discover More Right Here!

Stay Connected
46,458FansLike
5,663FollowersFollow
840FollowersFollow
Previous articleThe Early Episodes Of Obi-Wan Kenobi Are Based On The Best Of Classic Star Wars
Next articleReal Evidence of Climate Change a No Bullshit Approach