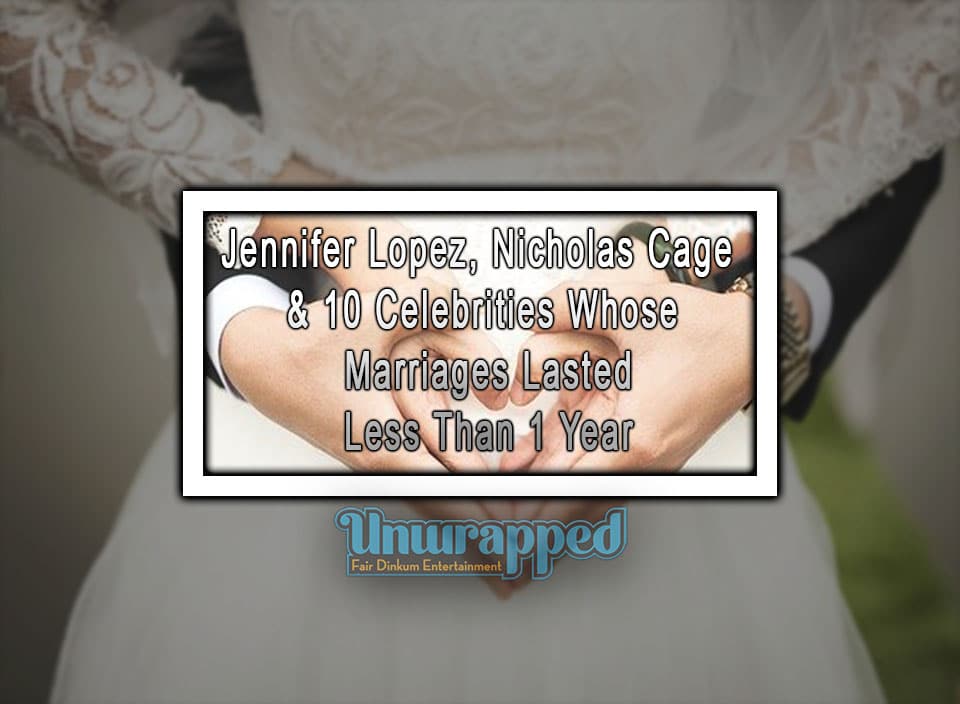 If you think about how short-lived most celebrity marriages are, you’d be left wondering why they thought it was a good idea to get married in the first place.

Below are some of the most ridiculously short-lived marriages that ever happened.

The couple divorced barely ten months into their marriage, citing the usual reason, “Irreconcilable differences”. Well, what could be so different that they didn’t see it ten months ago?

Well, here we have Lopez again, in another marriage, which lasted less than 250 days. Maybe marriage just isn’t her thing.

The stars both featured in One Tree Hill and got married in April of 2005, less than eight months later, they ended things before it even started. When questioned by reporters, Sophia said they were just being kids, kids who had no business getting married.

If you listened to any of the interviews they granted after their divorce, you would think they were a bunch of strangers forced into an unwanted marriage.

Cage turned down the chance to answer any questions relating to the divorce but Marie in response to questions about the divorce, said she didn’t think they should have married in the first place.

Tracy and Eddie got married in January of 2008, and 2 weeks in, they had already had enough of each other.

Dennis filed for annulment, just nine days into the marriage. He said he was intoxicated when he took his vows.

Mr Cage’s marriage to Erika, was his fourth, it is safe to say he isn’t cut out for that life.

This marriage was dissolved as quickly as it was made official. I am guessing the judge that dissolved it, gave them a piece of his mind.

The actors must have moved quickly as Cage married his fourth wife Erika Koike just four months after they tied the knot. However, they filed for annulment four days after the ceremony, and the divorce was finalized a few months later.

Stay Connected
52,667FansLike
5,669FollowersFollow
828FollowersFollow
Previous article8 Celebrities you didn’t know went to Prison
Next articleTop 5 Hollywood Actors Who Do Their Own Stunts