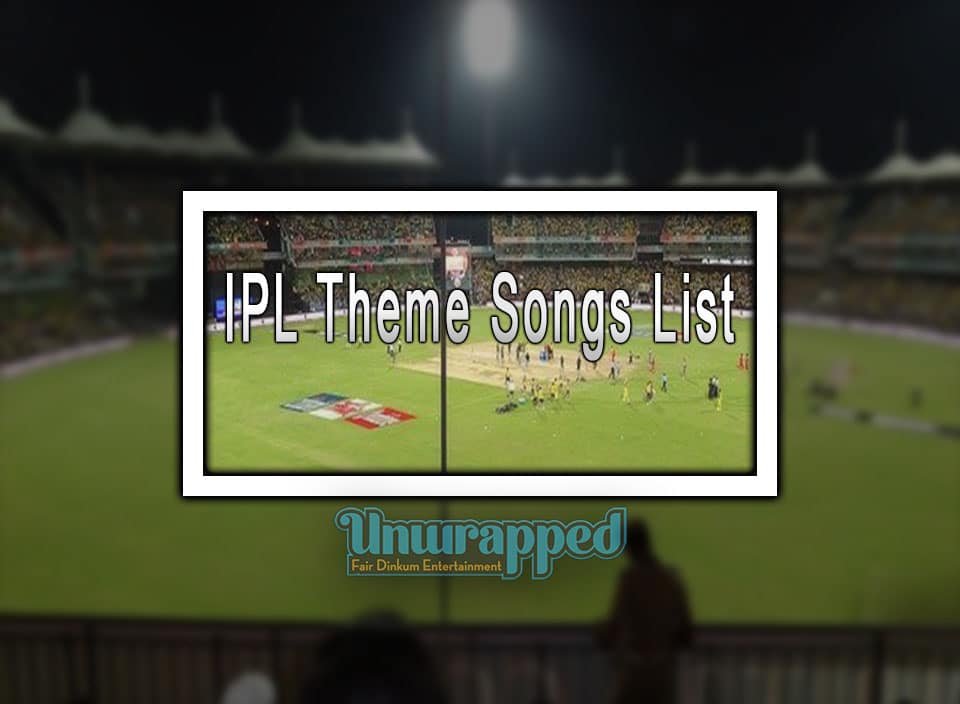 Indian Premier League or IPL is perhaps counted among the top following cricketing events around the world. It has a fair share of moments that establish it for the coming year.

The grand high-quality cricket on the field is not only the biggest point of drawing millions of fans. IPL manages to provide different forms of fun and entertainment outside the field as well. Interviews, analysis, contests, ads and grooving theme songs add a thoughtful glamour to the brand.

Every year millions of cricket fans hook up to the popular bat and ball game with their share of hope and happiness. From 2018 to 2020, it has been running strong without any fall in enthusiasm and excitement.

Every year the franchises may have got into the medley to create their theme songs. It is primarily to mark the great cricket celebration that launches the theme songs that manage to hold the true emotions and enthusiasm for cricket.

Theme songs connect all the supporters of the game to roar higher and higher for their teams. Songs like “Whistle Podu” by Chennai Super King, “Halla Bol” by Rajasthan Royals and “Korbo Lorbo Jeetbo” by Kolkata Knight Riders still tops the IPL chartbuster.

The songs mainly play all through the tournament, both inside and outside the game field. Nonetheless, it does end up occupying the playlists of cricket fans and music lovers. Here let us take a look at the generic IPL theme songs of the tournaments from every edition.

Though during the second IPL, no special theme song was there, an advertisement named “Divided by Nations, United by IPL” became a grand success. This year the IPL was taking place, not in India but in South Africa. Hence, the video that surfaced shows that fans and cricketers of different countries unite together just for this event.

IPL 2010 was a fantastic year that gifted fans two different songs. The main IPL theme song was “Saare Jahan Se Accha”, marking the return of the league in the motherland. The song focuses on India featuring all the then captains of the teams. They were shown standing in a packed stadium with people hooting and singing the song with devotion.

The second song was the extra innings theme song “Lautaaya”, featuring the celebrities of the Extra Innings T20 show who dances to the song with joy. Both the songs indeed celebrate the return of IPL to India.

IPL-4, held in 2011, has its famous theme song “Dum Laga Ke Mara Ray”, with an energetic trumpet sound. This is one of the iconic songs in the history of IPL that were on a loop on television and radios.

We can say that this song was practically grooving people from all the corners of India. Hence, “Dum Laga Ke Mara Ray” became a massive success in 2011.

The 5th IPL match held in 2012 had “Aisa Mauka Aur Kaha Milega” as its theme song. This peppy hip-hop IPL theme song featured most of the famous cricket commentators, including Harsha Bhogle, Ajay Jadeja and Navjot Singh Sidhu in the music video.

The 2013 IPL “Jumping Zapak” theme song can beat all the peppy movie numbers with its catchy lyrics. Also, the funky rhyme was a hit with the mass. The video featured famous cricketers like Kapil Dev and other celebrities in a fun medley. The intro of the song showing fans dancing to the choreography in the stadium and live screening set up the mood.

How many of you remember the “Come on Bulava Aaya Hai” 2014 IPL theme song? Well, we know most of you would recall this entertaining number. “Come on Bulava Aaya Hai” was a typical IPL theme song with a mix of pop music and high-spirited lyrics. The video features celebrities and commentators dancing and celebrating their enthusiasm for the league.

2015 was the year when IPL gifted us the celebration song of the tournament. Yes, it is none other than “India Ka Tyohaar”, which literally was a massive hit among fans. The song was apt to celebrate the carnival of Indian cricket. The video had Indians from different parts of the nation who are keenly watching the unfolding of cricket hungama on their television screens.

“India Ka Tyohaar” displayed our festivals make us go crazy, and IPL is no less than a celebration like Diwali.

The 2016 IPL song composed by the famous duo Salim-Sulaiman focuses on unifying the Indians hailing from different cultures. The message “spread love and not hate” was beautifully conveyed in the “Ek India Happy-wala” theme song. Raj Pandit, the voice behind this unity song, sings “Ek India Ho To Aisa Ho; Ho Pyar Wala, Muskan Wala”, which certainly matches the chord of the audience.

The 2017 theme song of the iconic IPL was “Das Saal Aapke Naam”, cherishing the mind-blowing 10 years journey of IPL. The theme song shows gratitude to the audience to make this happen.

The audience comes with enthusiasm, hoots for the player, speaks their mind, and gets emotional. They set the ambience, hail and do crazy stuff to show their love and support for the game. The lyrics salute the audience, managers, auctioneer, players and everyone engaged with the game.

IPL 2018 theme song “Yeh Khel hai Sher-Jawano Ka” features all the topmost world cricket players who play against each other to touch the top position. This song is an adaptation of a Hindi classical song that shows the remarkable moments of the field.

“Game Banayega Name” was the 2019 IPL anthem that conveys an incredible message. It boosts the confidence of the cricketers through the lyrics. No matter how much popular you are now, your performance in the game will give you more recognition.

This song shows the first juxtaposition of cricketers and fans creates a history.

Last year, the IPL theme song was all about being busy, fast and crazy. The song “Aab Khel Bolega” ups the banter game to the next level.

IPL is an iconic brand that has held twenty20 cricket leagues every year since 2008. The theme songs of IPL in every season define the spirit, diversity, culture, devotion and loyalty towards the game.

The cricket pitch becomes the battlefield for the players, who also turn into soldiers. And of course, the audience being the most important part, cheers for their team and sings these anthems throughout the tournament.