Top 10 Richest Australian Cricketers | The Second One Is A Surprise! 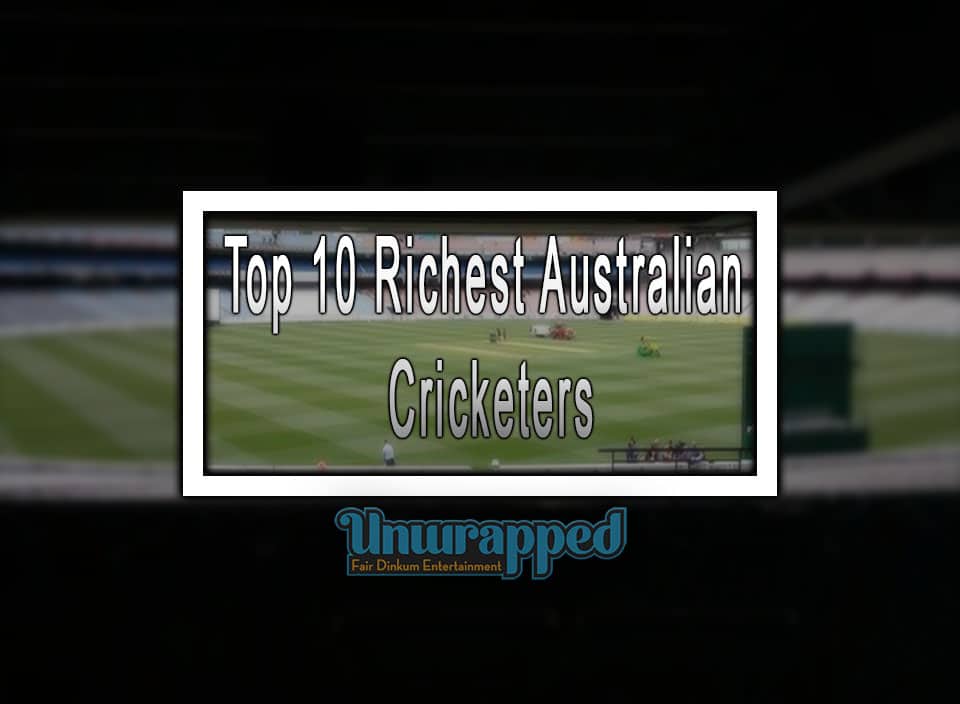 10 Highest Paid Australian Cricketers That You Should Know

Sports whether as a player or as a spectator is a popular activity for a lot of people. According to recent polls, the most highly followed game is soccer (football), followed closely by cricket, with basketball trailing behind at the third spot. This info for some may come as a surprise since the game of cricket is not as widely played in certain parts of the globe. However, in Britain where it originated, the game is a crowd favourite, the same can be said for Asian regions, and Australia. In these areas, cricket enjoys a large fanbase, with matches highly attended by many people, including the elite.

Thanks to the sport’s infamy, the world has through the years seen some of the best sportsmen. And in Australia where it ranks high up as a favourite sporting event, lots of its professional athletes are now enjoying a comfortable and luxurious lifestyle thanks to their favourable earnings.

As much as there is interest in comparing athlete gaming specs, and skills, fans of this gentleman’s sport are eager to know how much their team favourites make. Compiled below is a list of 2021’s highest-paid cricket players in Australia.

A swing bowler known for his accuracy and bowling length, Josh is a regular red-ball player of Australian cricket. Over 200 wickets are credited under his name. This 30-year-old bowler sits comfortably amongst the top-earning Australian cricket players.

This tall bowler became a fixture in many crickets matches the minute he made his debut in late 2014. Interestingly enough, Josh at age 23, would have played sooner had an injury back in 2010 dampen his dreams of being a fast bowler to be selected by New South Wales, he was 17 years old at the time. Nonetheless, this minor setback did not stop him from returning to the field years later. Today, he is considered one of the most up-and-coming players in his bracket.

Recognized as a cunning leg spinner who is skilful at picking up wickets during crucial moments of the match, Zampa generally plays for white-ball cricket. His estimated net worth is at a cool $1million. Not a bad start for a young 29-year-old cricket player.

A right-handed batsman, Adam is best known for his cricket bowling skills. Touted as the second-best bowling figure after managing 6 wickets and 19 runs in the history of IPL. In 2010 he successfully represented Australia in the under 19 Cricket World Cup match. Aside from cricket, he’s a staunch vegan and has advocated for PETA countless times.

Kangaroo all-rounder, Stoinis plays in the Australian team. This all-rounder is able to bowl a few overs and finish games with his medium-pace bowling abilities.

Perth-born Marcus is also considered as an aggressive top-order batsman. The 31-year-old has earned an estimated $1.2million AUD since signing to play cricket. Currently, he is among the best all-rounders known the world over.

Western Australian pace bowler Nathan is attributed for his unique bowling variations. He is a limited-over fast bowler specialist. At the moment he ranks as one of the top paid cricketers in Australia.

At the age of 33, Nathan’s reputation as a fast bowler in T20 matches is constantly being featured in various media and print publications. He has also been featured in multiple T20 leagues like IPL and BBL.

Captain of the Australian cricket team for white-ball matches, Finch is quite the aggressive opening batsman. He is able to easily and single-handedly change the course of a match at any given instance.

Right-handed when batting, Finch switches to his left when bowling. Many considered his bowling style to be unconventional. He regularly plays ODIs and T20s but has long retired from Test cricket games.

Proclaimed as one of the best batsmen of his generation, Steve Smith for the longest time has dominated long-format cricket. A right-handed batsman, he is a part of the top-order Australian cricket team.

It is believed that 31-year-old Steve ranks third in the list of highest-earning cricketers. Smith made his debut in 2010, he can play across all cricket formats. Aside from his earnings on the field, he has endorsed numerous big name brands like Fitbit, Gillette, New Balance, and Weet Bix.

One of the top cricket earners across the globe, David Warner is an amazing opening batsman for the Australian cricket team. A left-handed batsman who hails from New South Wales, 34-year-old David is at the top of his career.

He has proven time and again that dreams can be achieved with hard work and perseverance. Today, David Warner is one of the highest-earning cricket players in Australia, not to mention, one of the best.

Undeniably one of the most popular white-ball cricket players, this right-handed dynamic batsman from Australia can also bowl part-time off-spin really well.

A T20 player, 32-year-old Glenn Maxwell is said to have easily scored 3 T20I centuries for his team. Other than his earnings from playing in the Australian cricket board, a large chunk of his money is from playing at the elite Australian T20 league, and the Indian Premier League. Maxwell who went from rags to riches is proof that a lot of perseverance and dedication to his craft can lead to success in life.

He debuted in the world of cricket at the age of 18. He has come a long way since his early days in the sport. Now a member of the Indian Premier League, he derives his earnings from his player’s contract, business dealings, as well as various product endorsements.

Although no longer an active cricket player, the name Shane Warne is recognized by the cricket world. To date, he is one of the richest, if not THE richest, cricket stars in Australia.

He has multiple achievements to his name, one of which is being the top bowler of all time. His passion for the sport has led him to a career as a cricket commentator. Though no longer active, he remains to be one of the best and the wealthiest cricketers of all time.

Despite its popularity, many cricket players still do not get paid as much as other sportsmen. Forbes annually lists down professional athletes and their amassed wealth. The pack is often composed of basketball superstars, soccer players, tennis stars, race car drivers, and UFC fighters. Nonetheless, cricket athletes are not deterred by the salary comparison, rather, many use it as motivation to excel in their sport. And unlike other team sports, this gentleman’s game is played by a lot of highly talented athletes who value fairness more than equality, especially when it comes to their salaries.

Who is the richest Australian cricket player?

Net Worth – US$70 Million Having endorsed brands such as Valvoline, Adidas and Rexona amongst others, Ponting remains one of Australia’s most marketable athletes.

Stay Connected
52,683FansLike
5,667FollowersFollow
831FollowersFollow
Previous article10 Famous Cricketers Who Have Died While Playing
Next articleHow Much Do Big Bash Cricketers Earn? | Their Earnings Have A Upper Cap Too!