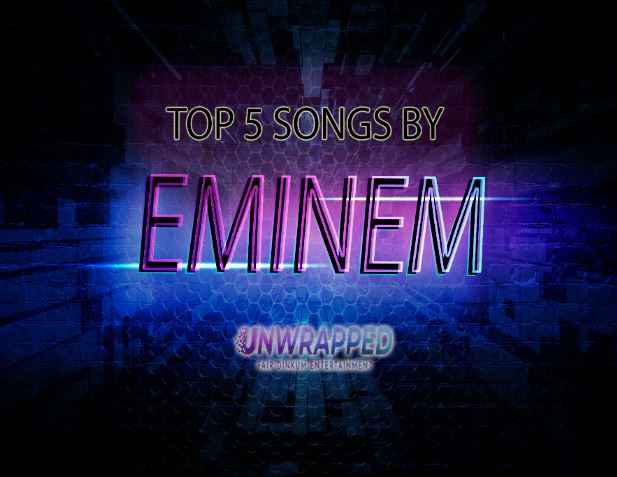 We know how excited you are to be swept away by music through Eminem‘s Top 5 Tracks. Australian Unwrapped would like to give you first a glimpse of the life of the artist. Enjoy reading and listening!

Who is Eminem: Eminem is an American rapper, songwriter, and record producer born  Marshall Bruce Mathers III on October 17, 1972. He is considered as one of the greatest rappers of all time as he hyped  hip-hop. The Marshall Mathers LP (2000) and The Eminem Show (2002), were some of his international hit songs which were both nominated Album of the Year for Grammy. Recording Industry Association of America (RIAA) certified the following singles as Diamond or higher: “Not Afraid”, The Marshall Mathers LP, “Lose Yourself”, The Eminem Show, Curtain Call: The Hits (2005), and “Love the Way You Lie”.

Eminem is not fond of reading. He only reads comic books.
He was once a short-order cook at Gilbert’s Lodge family restaurant.
His stage moniker came from combining the initials of his first and last name and not named after the candy.

We freaking love music here at Unwrapped, and we adore Eminem. In our humble opinion, here are the BEST FIVE SONGS by the legendary Eminem (most liked, listened and downloaded songs) across the web!!!

Look
If you had
One shot
Or one opportunity
To seize everything you ever wanted
In one moment
Would you capture it
Or just let it slip?
Yo
His palms are sweaty, knees weak, arms are heavy
There’s vomit on his sweater already, mom’s spaghetti
He’s nervous, but on the surface he looks calm and ready
To drop bombs, but he keeps on forgettin’
What he wrote down, the whole crowd goes so loud
He opens his mouth, but the words won’t come out
He’s chokin’, how, everybody’s jokin’ now
The clocks run out, times up, over, blaow
Snap back to reality, ope there goes gravity
Ope, there goes Rabbit, he choked
He’s so mad, but he won’t give up that easy? No
He won’t have it, he knows his whole back’s to these ropes
It don’t matter, he’s dope, he knows that, but he’s broke
He’s so stagnant, he knows, when he goes back to this mobile home, that’s when it’s
Back to the lab again, yo, this whole rhapsody
Better go capture this moment and hope it don’t pass him

‘Cause sometimes you just feel tired, feel weak
And when you feel weak, you feel like you wanna just give up
But you got to search within you, and try to find that inner strength
And just pull that shit out of you
And get that motivation to not give up, and not be a quitter
No matter how bad you wanna just fall flat on your face and collapse
‘Till I collapse I’m spilling these raps long as you feel ’em
‘Till the day that I drop you’ll never say that I’m not killing ’em
‘Cause when I am not, then I’ma stop penning ’em
And I am not Hip-Hop and I’m just not Eminem
Subliminal thoughts, when I’ma stop sending ’em?
Women are caught in webs, spin ’em and hock venom
Adrenalin shots, the penicillin could not get the illing to stop
Amoxicillin’s just not real enough

Love The Way You Lie

Just gonna stand there and watch me burn?
Well, that’s alright, because I like the way it hurts
Just gonna stand there and hear me cry?
Well, that’s alright, because I love the way you lie
I love the way you lie
I can’t tell you what it really is
I can only tell you what it feels like
And right now, there’s a steel knife in my windpipe
I can’t breathe, but I still fight while I can fight
As long as the wrong feels right, it’s like I’m in flight
High off of love, drunk from her hate
It’s like I’m huffing paint and I love her, the more I suffer
I suffocate and right before I’m about to drown
She resuscitates me, she fucking hates me

I hope you enjoyed listening to Eminem !