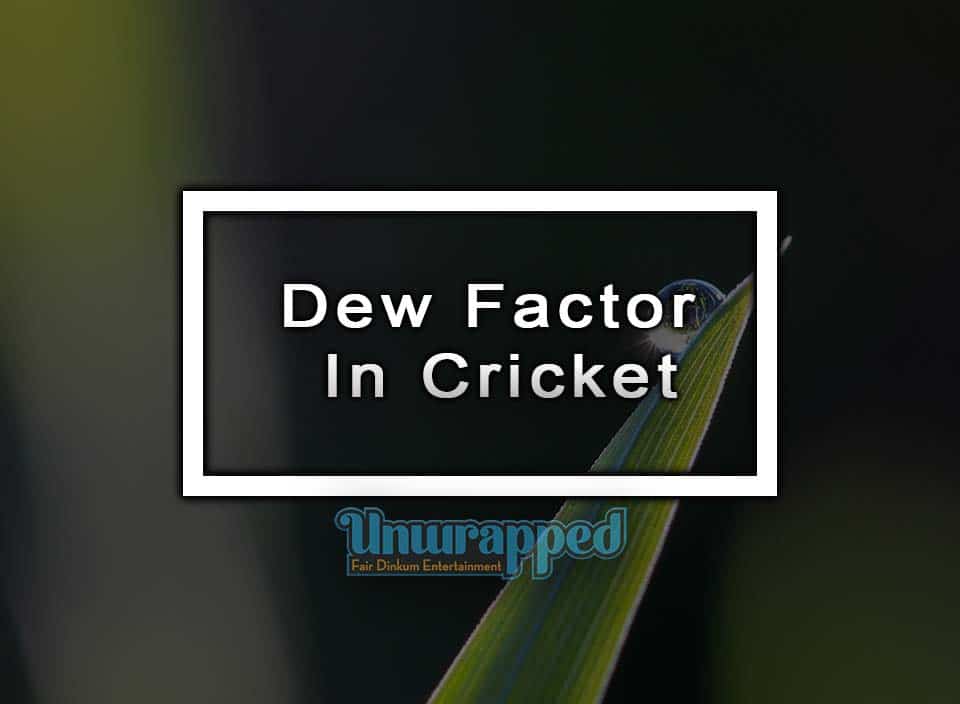 During the cricket match, we often heard the Umpire taking decisions and discussing the dew factors. The dew amid gameplay effectively is the huge factor that can alter the equation of the entire gameplay. The dew factor in cricket refers to the extreme moisture present in the air, which causes the ball to be moist; thus, it becomes difficult to control. Not only the ball but the grass field becomes wet that impacts the performance of the players.

Generally, the dew factors come up when the match is day and night. As the dew emerges during evening time and keeps increasing the level until night and stays still till twilight, thus it hampers the night gameplay. The dew factor covers the entire pitch area with a layer of wetness and moisture.

Previously, the dew factor never troubles any gameplay because cricket is a summer game and only plays during the daytime. But with the advanced technology and leverage of the relaxed atmosphere after sunset, the matches began to happen late evening.

Why does the dew factor occur only after sunset, not in the daytime?

The dew formation is one of the most common parts of nature. Water vapor is the main element of the air, and when the temperature is warm, the water vapor accumulates in the air. When suddenly the temperature drops, the air cannot hold the water vapor more, thus results in the break out of moisture into the atmosphere, leaving the dew drops on surfaces. The dew causes the surfaces, grass, plants, glasses, etc. moist and watery.

To what extent does the gameplay gets affected due to the dew factor?

The dew factor creates numerous difficulties during gameplay and concerns the performance of the spinners, bowlers, and fielders. But, the batting team often takes advantage of the situation as the bowlers are unable to deliver the ball with the same skill and agility, and the fielder tries hard to get a good grip of the ball while catching. Thus, the dew factor helps the batsmen to guess the ball direction and hit the ball as hard as possible, gaining extra runs. So let’s see how the dew factors affect the players on the field:

Due to the dew factor, the moisture sticks on surfaces and makes the pitch damp. Though the moisture on the exposed ground helps the crack patch and the ground look good, but when the bowlers try to deliver the bowl on the moist pitch, the ball tends to bounce on the surface before reaching the batsman. When the ball comes to contact with a wet surface, the ball speed decreases and makes it easy for the batsman to swing their bat quickly.

Any player who gets the complex effects of the dew factor amid gameplay is the bowlers and the spinners. The bowlers tend to rub one side of the ball against their jersey; as a result, it leaves one side of the ball rough and the other shiny. Thus, every time the ball comes in contact with the damp ground, it becomes challenging to distinguish between the two sides.

No matter how much ball wiping the bowler does, it cannot dry the ball completely. Therefore, the ball speed decreases, even if the fast bowler tries to deliver the ball like a machine.

The dew factors make the wrist-spinner losing the grip every time they try to spin the ball. In addition, it can cause a severe injury to the spinner’s fingers as the ball spin depends upon their fingers.

Even the strongest fielders often fail to catch the ball when the dew factor occurs, as moist balls tend to slip easily. In addition, the fielders must be much careful in handling the damp ball as it can hurt the bare hands. To catch the ball, the fielders practice forming the fingers upward direction while catching the ball but often fails as the nature of the wet ball.

Due to the dew factor amid gameplay stressed out the Team Captain the most, as the Captain demanded to manage the entire team and make sure the team wins. Mostly when it is a day-night match, the winning team Captain chooses to bowl first, as, after sunset, the dew factor impacts the bowling condition.

However, choosing to bowl first doesn’t guarantee any team will win the match if the dew factor occurs; it depends on the player’s performance.

How to minimize the effect of the dew factor during the cricket gameplay?

The dew factor amid gameplay is tough to tackle, resulting in match draw or cancellation of the match. This makes a considerable impact on calculating the overall team player’s performance. Therefore, BCCI brings a solution to minimize the effect of the dew factor during the cricket gameplay.

1.                 As the cricket match happens on the natural grass field, watering the grass is the primary element to keep it greener. To avoid the dew factor during the game, the ground shouldn’t be water for 2–3 days. The dry land absorbs moisture promptly.

4.                 Draining out the dew drops utilizing ropes between breaks and overs helps keep the groundless wet.

In cricket, the dew factors play a huge role, and they can change the gameplay at any time. The dew factor is one of the reasons why the cricket matches evolution change to a ‘limited over’ gameplay format (50 overs to 20 overs game format).

There have been changes in the cricket ball to tackle the dew factor — the use of pink ball during day-night matches. In addition to the pink ball getting brighter under the helium lights after sunset, the pink ball has a linen coat on the exterior and helps absorb the dew to some extent; thus, it gives the ball a better grip.

Cricket Mad: What Is Follow-on in Cricket?