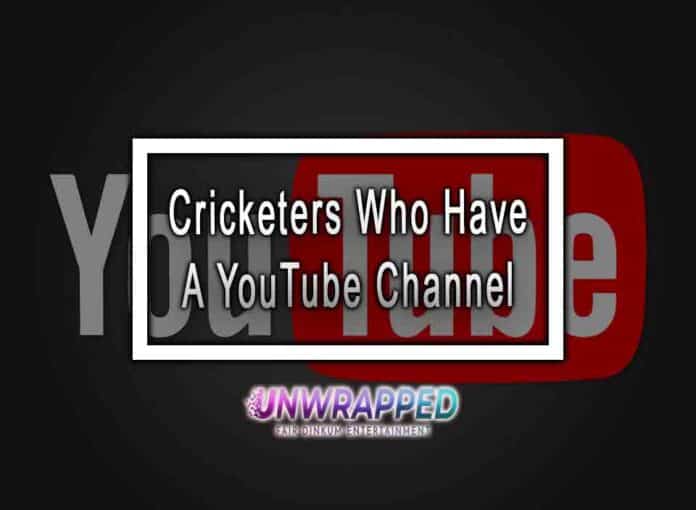 These days, it seems like everyone has a YouTube channel. Even cricketers are getting in on the action! In this article, we’ll take a look at some of the top cricketing YouTubers out there, as well as what kinds of videos they produce. From funny skits to tips and tricks, these channels have a little something for everyone.

Shoaib Akhtar is a Pakistani cricket legend who now has his own YouTube channel. Shoaib Akhtar made his international debut for Pakistan in 1997 and quickly became known as the ‘Rawalpindi Express’ due to his lightning fast bowling.

Since retiring from cricket, Shoaib Akhtar has become a popular television commentator. He also has his own YouTube channel, which he uses to share his thoughts on cricket with his fans. He has over 3,000,000 subscribers on his channel and he regularly posts new videos.

Aakash Chopra is a former Indian cricketer who has a YouTube channel where he talks about cricket. He started his YouTube channel in 2016, and it has since grown to over a million subscribers. He also has a podcast called “Aakash Chopra Cricket Show.” In these shows, he discusses various cricket-related topics with other cricketers and experts.

Chopra’s YouTube channel is popular among cricket fans because of his in-depth knowledge of the game. He provides insightful analysis and commentary on cricket matches. His videos are also entertaining and informative.

He is one of the most popular cricketers on YouTube. His videos have been viewed over 50 million times. Ashwin is a successful cricketer and YouTuber. He is an inspiration to many aspiring cricketers out there.

Sachin Tendulkar is an Indian cricket legend who has a YouTube channel with over 1.6 million subscribers. Sachin started his channel in 2018 and has since then uploaded videos of himself giving cricketing tips, doing Q&As, and sharing his thoughts on the game.

Sachin isn’t the only cricketer with a YouTube channel. Other popular cricketers with channels include Australian duo Steve Smith and David Warner, England’s Joe Root, and Indian all-rounder Ravindra Jadeja. Cricketers are increasingly using YouTube as a way to connect with fans and share their passion for the game.

Pat Cummins is an Australian cricketer who has a YouTube channel. Cummins is a fast bowler and is considered one of the best bowlers in the world. He has played for the Australian national cricket team since 2011.

Cummins’ YouTube channel features videos of him playing cricket, training, and travelling around the world. He also gives insights into his life as a professional cricketer. Cummins is one of the most successful cricketers in recent years. His YouTube channel is a great way for fans to get to know him better and see what he’s up to when he’s not playing cricket.

Shoaib Akhtar is a Pakistani cricketer who has a YouTube channel called “Cricket with Shoiab.” On his channel, he posts videos of himself playing cricket, talking about cricket, and giving cricket tips.

Akhtar’s YouTube channel is popular among cricket fans. He gives insights into the game that only a professional player could provide. His videos are informative and entertaining, making him one of the most popular cricketers on YouTube.

Ramiz Raja is a former Pakistani cricketer who now has his own YouTube channel. Raja’s channel features videos on a variety of topics related to cricket, including interviews, commentary, and analysis. Raja’s channel has proven to be popular with cricket fans, as it offers an insight into the game from a former player’s perspective.

Raja is also known for his humorous and entertaining approach to the videos, which makes them enjoyable to watch even for those who are not familiar with the sport. In addition to his YouTube channel, Raja also has a blog where he writes about cricket and other sports. He is also a regular commentator on Pakistan’s domestic cricket scene.

Ravichandran Ashwin is an Indian cricketer who has a YouTube channel with over 190k subscribers. Ashwin’s channel features cricket highlights, interviews, and other videos related to the sport. Ashwin started his YouTube channel in 2016 and has since then released over 200 videos. His most popular video is a highlights reel of his bowling performance in the 2017 India-Australia Test series, which has been viewed over 5 million times.

In addition to his YouTube channel, Ashwin also has a website and a blog where he writes about cricket and other topics. He is also active on social media, with over 2 million followers on Twitter.

Brad Hogg is a retired Australian cricketer who has a YouTube channel called “Hogg’s Vlogs”. On his channel, Brad Hogg gives his thoughts on the game of cricket and shares his experiences from his career. He also gives advice to aspiring cricketers.

Brad Hogg’s YouTube channel is very popular. It has over 130,000 subscribers and has had over 10 million views. Brad Hogg is not the only cricketer with a YouTube channel. Other cricketers with popular channels include Mitchell Starc, Shane Warne, and Tim Paine.

Not to Miss: 7 Biggest Sponsors Of Women’s Sports In Australia

Salman Butt made his debut for the Pakistani national cricket team in 2003. He played for Pakistan until 2010. During his career, he scored over 3,500 runs and took more than 100 wickets. He also played in the 2009 ICC World Twenty20 and was part of the Pakistan team that won the tournament.

After he was banned from cricket for his involvement in a spot-fixing scandal, Salman Butt started his own YouTube channel. On his channel, he talks about cricket and other sports. He also gives his opinion on current affairs. His channel has over 90,000 subscribers.

In conclusion, we can see that there are many cricketers who have a YouTube channel. This is a great way for them to connect with their fans and give them an insight into their lives outside of cricket. We hope that this article has inspired you to follow some of these great cricketing personalities.

Stay Connected
41,936FansLike
5,684FollowersFollow
865FollowersFollow
Previous article
Cricketers Who Went to Jail
Next article
Melbourne Cup 2022: Everything you need to know and the favorites