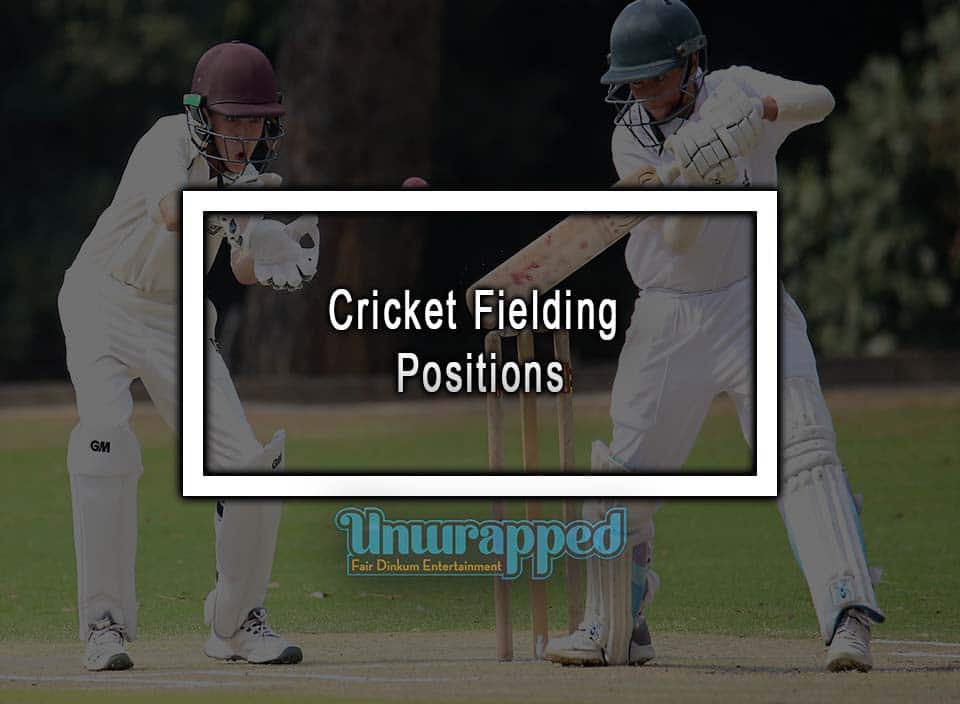 Just like in any other team sport, cricket also has a structure in the field and that structure is called positions. The purpose of these cricketing positions is that cricket players have their own role in the field and placement as well, in order to have organized gameplay and for fans, commentators, spectators, fellow players, and coaches to easily determine the position of each cricketer in a specific location of the field.

In this article, we will be nitpicking and discussing each and every single cricketing position in the field and its purposes and roles. There will be multiple different positions, so get your pen and paper ready to take some notes!

Different Cricket Fieldings, Their Components, and Their Roles

Being the wicketkeeper in the team is the most important fielding position because they are responsible for catching the ball in their gloves if the batsman who is standing in front of them misses the to strike the ball.

This position is another vital part of the field and this compose of 4 main fielding positions but on some occasions, most of the slips are not really used simultaneously. Balls are not really thrown in their direction but if the front liners like the wicketkeeper and batsmen miss, they will be there to catch. The Slip fielders usually follow the positions of a wicketkeeper to base where they should position themselves.

Gullies are the extension of the Slip fielders. They are also aligned in a diagonal line along with the slip fielders. Gully fielders must be capable of exerting great speed and agility in order to catch the ball.

This next position is almost similar to the Leg Slip position. They are usually stationed slightly away on the leg side of the batsman. If the batsman is getting lazy with having a wider scope in striking the ball, the Leg Gully could save the ball from getting missed.

This position is closer to the batsman but on the offside of the field. They are stationed in front of the batsman at a 45-degree angle. The cricketers in this position stand a meter away from the cricket pitch. This position is pretty dangerous since they are closer to where the attack is coming from so they must wear hard helmets and other protective gear to protect themselves from the balls.

The same as the silly point, this fielding position also stands closer to the batsman but is a little farther off in the middle. This position is as dangerous as well so players in this position must also wear protective gear and be on high alert for upcoming ball throws towards their way.

This fielding position is just across the Silly Mid-Off with the same role as well. If you are a cricketer that is stationed in this position, you must wear protective gear to avoid any injuries.

This is the circle that surrounds the close catching field. This position is responsible for stopping the batsman from running singles. The fielders who are stationed in this position will be 30 years away from the batsman. If you play a role in this fielding position, make sure that you are aware of your surroundings, alert, and agile, because you will be fielding lengths when you get bowled.

Read This: What Do Cricketers Wear?

This position is almost identical to the first Inner Circle position that was mentioned. The backward point is located behind the wicket off the edge. The role of this position is just the same as the point fielding position.

The mid-off fielder is positioned far away from the previously mentioned inner circle fielders. They are used to stop the batsman from taking a single hit if the ball is headed towards them. They are assigned to cover any shots that are headed straight to the ground so this position requires multiple diving movements to the ground.

The cover position in the field is located just in front of the square on the offside. they are placed between the point and extra cover.

The extra cover fielders are usually positioned just almost behind the bowlers in the field. They usually receive high traffic of the balls and are in charge of looking for the batsman’s weakness.

Mid-on fielders are also located almost behind the batsman and they are required to stop the drives into the leg side. They also have roles to fill the gap. Another one of their roles is to pressure the batsman.

They are normally found at the square leg position. They play various roles so it is quite hard to be in this position. But one of their purposes is to try to narrow the gap where that batsman directs the ball to.

Another fielding position that has to fill the gaps of the inner circle is the backward square leg position. They are located just behind the batsman. Cricketers who are stationed here have the same role and athleticism as the square leg fielders.

Mid-wicket fielders are positioned in alignment with the bowlers in the center field. Their role is also identical to the previous inner fielders because their roles are solely for covering the gaps in order to prevent the ball from sliding out of their reach.

Fine leg fielders are almost behind the wicketkeeper at a 45-degree angle. They are also referred to as short fine legs because they are stationed close to the batsman. They are mostly the sprinters of the game of cricket in order to catch the ball and throw them back again.

The outfield is the outermost layer in all cricketing positions. They occupy the outer field up until the boundary of the field. This is also the largest space to be covered which contains the most number of components out of all the three basic cricket fielding positions.

Also See: Why Does a Cricket Ball Swing?

The third man is stationed by the boundary and aligned to the batsman at a 45-degree angle. They are located behind the square on the offside of the cricket field. If there are no-slip fielders in front of them that were assigned, they will do their job in covering a huge amount of gap when a batsman directed the ball towards the third man’s area.

The deep backward point is another position by the boundary that is a little bit behind the square of the off-side of the cricket field. Their assigned task is somewhat identical to what the deep point cricketers do. If you are someone who will be playing for the deep backward point position, you will need an immense amount of athleticism because the gap that you will be covered to prevent the batsman make a square-cut shot of 4, is larger than those who are assigned at the inner circle of the field.

Another position that dwells in the boundary is the deep cover and they lie just in front of the square on the off-side of the wicket. If you are in this position, you will have to try your best and unleash a greater power of your fitness to cover vast boundaries.

This position is just the same as the previous outfield positions by the boundaries who are trying to fill the gaps whenever a ball tries to catch up to them.

Deep fine leg fielders are positioned on the boundary behind the square on the leg side of the field. They are also located at a 45-degree angle to the batsman. Again, they also have the same roles as the previous outfield cricketers and that is to keep on diving to the ground when chasing a ball to prevent the cricket ball from rolling past them and go beyond the field.

The long leg position inf the outfield circle is located just beside the deep fine leg. They are assigned to cover the huge gap between the deep fine leg fielder and the deep square leg position. The fielder assigned to this outfield position is aligned to the batsman at a 60-degree angle. They are considered to be as the patrols in the boundary behind the square on the leg side and prevent any shots to go near them.

They are stationed exactly beside the batsman, by the boundary, of course. They protect the boundary and prevent any shots made by the batsman to go near them or beyond them especially if the batsman tried to strike shots of 4. They are mostly used as a bluff against the batsman.

Almost completing the circle of outfield boundary protectors, deep mid-wickets are another important role in protecting the boundary and preventing the batsman to execute shots of 4 towards this area. This fielding position is mostly utilized in shorter cricket formats such as T20 and One Day International matches because most batsmen will try to aggressively batter their shots towards this area of the field.

Yes, you heard it right, this next fielding position is named after an animal. This second to the last fielding position is located behind the bowler at an angle of 45 degrees. They are a little straighter than the deep mid-wicket fielding position. The role of a cow corner fielder is not that different from the other boundary-based cricket fielders just like what this article had already mentioned multiple times. They will have to try their best to cover their area, both left and right, and catching the ball that the batsman shoots towards their position.

Finally, for the last outfield and boundary-based position, the long-on field position. They are located at the leg side of the batsman which is around 5 to 10 meters to the leg side of the line. This position is the last fielding positions to cover the area of boundary-based positions. If you are assigned to this fielding position, you might need more athletic competency because the coverage of the area you are assigned to is extremely vast and wide so you will have to run as fast as you can to prevent the cricket ball from passing through your shield and you also have to agile when you try to attempt the dive on the ground. Wear protective gears to ensure your protection from the brute impact you will face as you fall on the ground.

The advantage to this boundary-based position, along with the long-on and long-off is that fielder captains will use these positions before they inform the batsman to bowl at a full capacity towards the batsman’s stumps. This means that the batsman will struggle to hit the ball since the cricket ball will be rolling over the ground. Won’t it be embarrassing if you supposedly hit the rolling ball on the ground but accidentally dug a hole on the grass field? With the help of these fielding positions, when they work together, it will be a winning strategy for the team because their strategy will make that batsman score a lower shot.

Enjoy: Why You Should Play Cricket?

Cricketers Who Acted In Movies