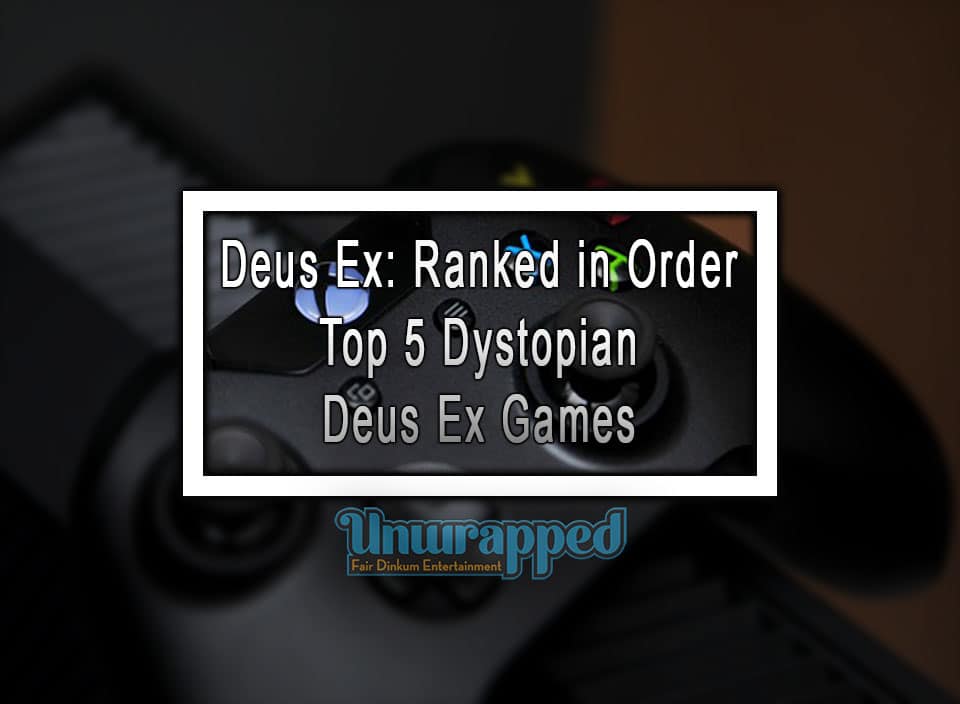 Deus Ex dystopian video games sold over five million copies and received critical acclaim globally. These are a series that plays off in the 21st century. The games focus on secretive factions that fight to have control of the world by proxy. All of the games focus on a future dystopian world.
The ongoing conflict has a significant effect on the technologies and rising transhumanistic attitudes. Each one of the six games in the Deus Ex has its own distinct story. One thing though remains the same, the world is a future Earth that has become a dystopian cyberpunk society.
Something else that is constant throughout the series is the conspiracy theories, the Knights Templar, Majestic 12, FEMA and the Illuminati. All the main characters possess artificial augmentation which gives them superhuman abilities.

The first in the series is Deus Ex, which plays off in 2052. During this time the world is succumbed by a crisis that derived from Gray Death, which is a mysterious nano-virus. In the middle of it all is a nano-augmented agent, JC Denton. He works for the anti-terrorist coalition of the United Nations.
While his main mission is to infiltrate and eliminate terrorist cells, he gets sucked into conspiracies, secret societies and rival factions all of whom which are responsible for the chaotic situation through the virus. He arrives in Area 51 and is confronted by two major choices.
He either has to merge with the advanced AI to destroy a benevolent dictatorship or become an ally to the Illuminate to neutralize technology and cause the world to fall into another dark age. A player will be the main protagonist JC Denton and what makes this dystopian game even better is the ability to enhance the abilities of Denton using augmentation canisters.

Deus Ex: Human Revolution was released in 2011 and the third game in the Deus Ex series. However, chronologically it should have been the first game since it plays off in 2027. During this time human augmentation just started entering the world.
While the previous games used nanotechnological augmentation, in Human Revolution, the augmentation used in this game is mechanical. In Human Revolution, you will play as the main protagonist Adam Jensen. He protects a Detroit based research lab for his employer, Sarif Industries.
His ex-girlfriend is Megan Reed that wants to announce during a meeting at Sarif Industries that she and her team discovered human augmentation that people can use without the need to use anti-rejection drugs. When three terribly augmented mercenaries lead a group of armed soldiers to attack the meeting place, during which Adam is shot in the head. Be survives though as Sarif used extensive augmentation on Adam.
As a player being Jensen, you will determine his reaction when he wakes up. This is at the start of the game; therefore, you have many incredible surprises and intensive gameplay ahead of you without me spoiling the surprises.

Gameplay starts with Ben Saxon, a former SAS soldier and Anna Kelso, a former Secret Service agent. It is 2027 which is the golden era for human augmentation, science and technology, but also for global conspiracy and social divide.
Ben also had mechanical augmentation and after betrayal by the Tyrants who are a private military company, he seeks the truth that is covered by a drug conspiracy. Not only his life, but everyone who received augmentation has their lives at risk. A drug that all the augmented humans must use, is Neuropozyne and unavailable around the globe.
Saxon is desperate to find the drug and at an improvised clinic he found an alternative, but he is worried about the safety of the new, untested drug. Play this dystopian game and experience the tyranny, betrayal and revenge in the game released in 2013.

Mankind Divided was released in 2016 and the game itself plays off two years after Human Revolution in 2029. Jensen is back in Mankind Divided after Hugh Darrow stole the biochip signal and broadcasted it around the globe.
It caused massive uprising with everyone with augmentation violently attacked everyone around them. Adam shut down the broadcast, but the dystopian aftermath is horrific. The world is divided, and non-augmented people are forcibly separated from mechanically augmented humans. By this time Jensen is working for Task Force 29, an Interpol funded corporation that is dealing with terrorist.
At the same time, he works with Juggernaut Collective who is as determined as Jensen to bring the Illuminati down and end their reign of terror and oppression. Play the dystopian game and experience Jensen, who you will be playing, finding out his own augmentations are busy to malfunction.
Only after visiting an augmentation specialist does he find out that he is implanted with experimental augmentations which he had no prior knowledge of.

Deus Ex: Invisible War was released in 2004 and plays off about twenty years after the first Deus Ex. While the dystopian world of Deus Ex playing off in 2072, is starting to recover from the global Catastrophic depression, chaos is all around.
Numerous political and religious factions are competing to take over the world and be the governing faction. Each one has their own hidden agenda and they know if they make the right move, they will be able to shape humanity to their liking for centuries to come. A player can play along in the techno-nightmare and try to save the globe from the dark dystopian ashes.
Players will be the protagonist Alex D who is taken to Seattle after a terrorist attack. He is in the middle of a network of ongoing plots as every faction is in battle for global control. Aside of conspiracy theories, recurring dystopian settings, the game also focuses on terrorism.

Read More: The World You Think You Know

While Deus Ex: Mankind Divided is number four on the top 5 best dystopian Deus Ex games list, it is, in fact, the last installment of the series. Altogether they developed six games with the top five listed here. We will have to wait and see if the developers of this brilliant dystopia series will launch another game in the near future.

Why Deus Ex is the best game ever?

Deus Ex has been hailed by many as the greatest PC game of all time despite its many flaws. Its graphics were terrible, voice-acting was terrible in certain parts and even though it is a pinnacle of choice in video games, it doesn’t mean that the choice you make will go smoothly as well.