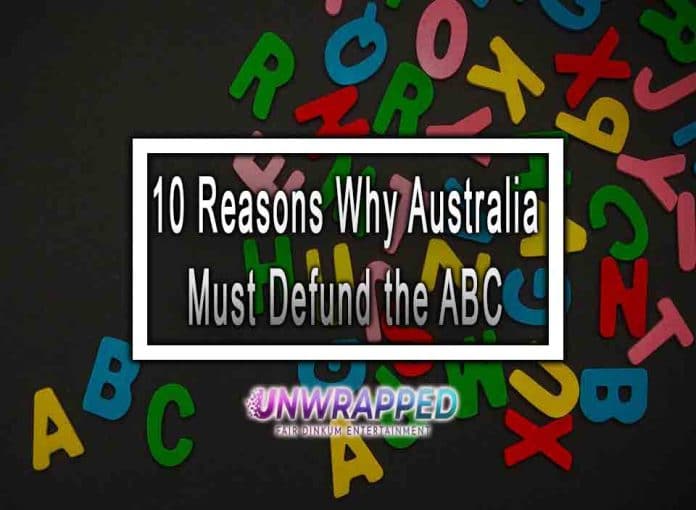 Millions of Australians watch the Australian Broadcasting Corporation (ABC), learning local and global news through the reporting of this state-funded media. ABC serves as Australia’s official yet neutral news provider, releasing content on televisions, radios, phones, and streaming platforms. Because of this, ABC has become a part of Australians’ daily lives. Reports show that this network enjoys the top spot in Australia’s viewership ratings, aside from the one-billion-dollar assets that the government gives them.

But the controversies and accusations plaguing ABC cast doubt on the channel’s integrity and even its existence. Recent headlines show how some politicians seek to cut the network’s revenue stream from the Australian government. Why? Here are the stated reasons behind the calls to defund the ABC.

1.      The ABC violates their standard of objective and impartial reporting.

When the government legislated the ABC’s charter in 1983, the newly founded network was mandated to have a board that must ensure its integrity, accuracy, and independence. The act also requires ABC to report the news with balanced, objective, and diverse perspectives.

Hence, the channel’s editorial policy tells its newscasters and reporters to evenly represent opposing views in the community. Doing this will promote ABC’s commitment to the Australian democracy. After all, ABC is funded by taxpayer money and founded through public legislation.

But many viewers and politicians still accuse ABC of bias and selective coverage of political and societal issues. This criticism constantly strikes the network. The Australian public’s high expectation of its impartiality and the newscasters’ views is a delicate balance that will always trigger controversy should it tip to one side or the other. Fortunately, the government is keen to inquire and investigate charges of bias in the network.

2.      The ABC seems to be biased on controversial issues.

Many critical analysts and conservative viewers claim that ABC favours left-wing ideologies and points of view. Some experts even count that many journalists and writers in ABC are affiliated with the Labor Party. Hence, they usually have progressive talking points regarding LGBT, feminism, native peoples, intersectionality, and immigration.

The network launched an auditing initiative because of the routine complaints about ABC’s biases. James Spigelman, ABC’s chairperson, declared in 2013 that they would hold independent examinations four times per year. These audits will assess how ABC reports events and opinions.

One time, its support organisation, ABC Friends, declared that the party that controls the current government always claims bias against ABC. But many commentators, journalists, and politicians disagree. They agree that ABC favours the political left, such as Tim Blair, Tom Switzer, Pru Goward, Maurice Newman, and Malcolm Turnbull. Likewise, the Australian Christian Lobby complained against the ABC when one presenter attacked those who criticise gay marriage as he praised a homosexual swimmer.

Also See: How to Fight Back Against Woke Culture – Combat Wokism 101

Mark Scott, ABC’s managing director in 2016, addressed this issue during an interview. When the host asked why the network seems to address LGBT more than energy costs, Mark Scott said that ABC does not emphasise the political inclinations of their staff and journalists. He also cited this as to why there are no openly conservative hosts in the network.

3.      Some investigations confirm that ABC has biases.

The network and the government facilitate independent reviews to assess ABC’s political inclinations. Some of the results incriminate ABC of bias:

These examinations show that findings on ABC’s bias are inconclusive. Hence, the issue is highly debatable depending on how the channel selects which topics to cover and how viewers identify politically.

4.      Some people see ABC’s relationship with the government as a conflict of interest.

During the 1990s, both the leading Liberal and Labor politicians complained that ABC was biased. Bob Hawke, the Australian Prime Minister, belonging to the Labor Party, said that the network did not reasonably report on the 1991 Gulf War. Then, in 1996, conservative contender John Howard did not want ABC’s lead reporter to moderate his election TV debate with Paul Keating. Howard thought that that ABC reporter was against the Coalition government.

When John Howard won, leading ABC journalists became affiliated with the Labor Party. One of them, Maxine McKew, would even beat Howard for his seat in Bennelong in 2007. During the Rudd administration, ABC’s Chris Uhlmann and Juanita Phillips had romantic relationships with Labor politicians.

The subsequent prime minister from the Liberal Party, Tony Abbott, was hostile to ABC. He called one of its shows a left-wing mob that does not take Australia’s side during national controversies. He boycotted Q&A because the show allowed a convict who threatened government officials to debate with one of the Coalition ministers. Worse, he deducted funding from ABC while he “repaired” the country’s budget, contrary to what he promised during the election.

No wonder ABC seemed to celebrate when Tony Abbott lost his leadership position in the party and the Coalition government. When Turnbull replaced him, the hosts of Four Corners, Insiders, and ABC’s radio programs spoke positively about Abbott’s loss.

This brief history of ABC’s relationship with the government shows that its journalists and employees are much closer to Labor and less conservative Liberal politicians. Because of this, some viewers and observers sense a conflict of interest in the channel.

Same-sex marriage remains to be divisive and contentious in Australian society and politics. But ABC openly sided with the LGBT community when brought up in 2017. Because of this, the government called ABC’s editors to show restraint.

Australians celebrate January 26 as the birthday of the modern Australian nation, also called Australia Day. But this historical event still upsets many Aboriginal and indigenous communities who got supplanted by the British and Irish newcomers. Many sympathisers and activists instead refer to January 26 as “Invasion Day” to protest against the event’s legacy and commemoration.

Expectedly, ABC faced backlash when they called it Invasion Day in 2021. Paul Fletcher, the Communications Minister, called out the network for this editorial decision, saying it was wrong. Aside from its aggressive stance on this holiday, “Australia Day” is used throughout federal and state laws. It is also the name applied by the vast majority of Australians. Paul Fletcher further said that calling it Invasion Day violates ABC’s mandate to present balanced and accurate reporting.

Must Read: What is Coercive Control, and How to Fight Back?

The Institute of Public Affairs called the government to defund the ABC. They argued that taxpayer money should not get spent on the network’s identity politics, divisive campaigns, and “disrespect” of Australian values.

7.      Some Catholics think that ABC went too far in investigating bishops.

In 2016, ABC covered the sex abuse allegations among the Australian Catholic clergy. They went after George Pell, the cardinal of the Catholic Church in Australia. While the network received awards from the Melbourne Press Club, many analysts criticised ABC for showing an overwhelming focus on the case against George Pell and the suspected priests. Some observers even accused ABC journalists of advocating to have George Pell arrested.

In 2008, ABC launched the Planet Slayer website, which aims to educate the youth about taking care of the planet. But it had morbid undertones. For example, the Planet Slayer had a carbon footprint calculator showing when a person must die if they do not sacrifice enough to conserve the planet. Its cartoons also presented meat-eaters and nuclear plants as evil.

9.      Why should the government fund state media?

Those who believe in freedom of expression and the media raise their eyebrows on government-funded networks. After all, there are already notable independent media corporations in Australia. For some Australians, ABC is a mouthpiece of the government, speaking of its agendas while claiming to stay objective.

As an organisation with taxpayer funding and a high standard of integrity, ABC’s standing is always delicate. But the events that transpired in ABC in 2021 renewed the calls to privatise it. Their defamation cases against the previous attorney-general and a Coalition minister made ABC’s standing a subject of controversy and debate.