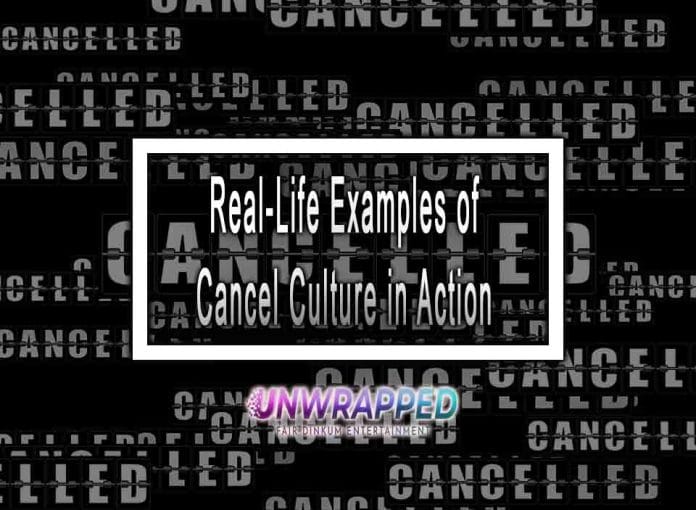 Cancel culture is fundamentally exclusive and incompatible with democratic and free speech norms. It is our right to communicate information freely, ideas, and views, subject only to reasonable constraints and without government restrictions based on content, but too much use can step on other rights. That is when free speech is sometimes threatened to be used without its limitation.

Someone does or says something offensive. The public backlash was something you expected to happen. The demands to cancel that person, brand, or institution follow. Many individuals regard boycotting as a modern-day way of keeping people accountable, exposing injustice and public humiliation. It happens on social media and mostly with known people.

Here are ten examples of people who get cancelled due to one or more problematic concerns or controversial issues.

1.      J.K. Rowling stirred an uproar from the LGBTQ community.

To the dismay of her innumerable LGBTQ+ supporters, the British novelist caused a backlash after tweeting her support for a woman who has a history of making transphobic remarks. Rowling is a TERF or a trans-exclusionary radical feminist, which means she is transphobic. Simply put, this feminist does not believe that trans women are women.

Rowling quotes George Orwell’s work 1984 in her tweet before adding her own opinions. Some people are offended by her concentration on male rapists. Women are capable of rape as well. Thus, whether the accused person identifies as a woman, they will be prosecuted with rape if found guilty. Her tweet’s primary focus is where she claims that possessing a penis qualifies someone as a male. It ignores many transgender people’s experiences.

Following JK Rowling’s tweet, there has been a lot of debate and discussion, as with any sensitive topic. Tensions surrounding the author are running high on social media, especially since data reveal that trans people endure disproportionately high levels of violence. Many people believe that comments like these contribute to violence.

Those who disagree with Rowling have previously crossed many lines. People who disagree with someone should not threaten or attempt to doxx them, especially if they have a high profile. Rowling claims she has received death threats after expressing her views on the transgender population.

As a result of her actions, her attackers have decided to boycott her books. They also encouraged her publisher to cease paying royalties. But many logical activists criticise JK Rowling peacefully online rather than by threatening violence.

Former Idaho deputy marshal Nate Silvester was fired after a contentious TikTok video. Silvester is best known for a viral TikTok video in which he mocked LeBron James after the basketball star’s now-deleted remark on the shooting of Ma’Khia Bryant, a 16-year-old girl.

In uniform, Nate Silvester filmed a comedy claiming to be on the phone with a LA Lakers basketball player. The cop pretends to call James to inquire about his course of action after witnessing a faked knife attack involving a Black criminal against a Black victim in the video.

Silvester was publicly reprimanded and suspended by the Bellevue Marshal’s office for failing to follow a laid out and well-established policy. He has garnered much support and prominence following the professional fallout triggered by his TikTok post, from a now-suspended lucrative fundraiser to a book deal.

After experiencing blowback for previous statements, Chrissy Teigen frequently strives to be on social media. Reality star Courtney Stodden claimed that Teigen had harassed them and received death threats over their wedding to then-51-year-old actor Doug Hutchison. Stodden was just 16 at the time, prompting a backlash on social media.

Teigen’s public harassment of Courtney Stodden, who was encouraged to kill herself when she was 16, began in May. In June, Teigen also received criticism after fashion designer Michael Costello claimed Teigen and her stylist friend Monica Rose conspired to prevent him from pursuing career possibilities. As a result, he considered suicide.

Mean tweets posted against Avril Lavigne, Lindsay Lohan, and Republican politician Sarah Palin were among Teigen’s previous acts of bullying. Teigen apologised publicly twice in response, admitting the hurtfulness of her statements before stepping away from social media.

4.      Marilyn Manson gets cancelled after the sexual assault accusation against him.

Marilyn Manson’s record company, Loma Vista Recordings, fired him after many women accused him of sexual assault and sex trafficking, including Westworld actress and ex-girlfriend Evan Rachel Wood. Manson and Wood started dating in 2007, got engaged in 2010, and then split up later.

Wood has previously stated that she has been the victim of rape and domestic abuse but has not named the abuser.

Also See: How to Fight Back Against Woke Culture

Many came forward online to make similar statements accusing Manson of abuse on Monday. After that, many additional women used social media channels to make similar accusations against Manson.

Wood shared a photo of a letter from California senator Susan Rubio to acting US Attorney General Monty Wilkinson, urging that the US Department of Justice meet with the claimed victims and examine the allegations.

5.      Will Smith gets bashed after the Oscars

Willard Carroll Smith II, commonly known as the Fresh Prince, is an actor, rapper, and producer from the United States. During the 94th Academy Awards in 2022, the evening was dominated by Will Smith, after slapping Chris Rock, the event’s host, for joking about Smith’s wife.

The actress and her husband, Will Smith, were unhappy with Chris Rock’s joke about Jada Pinkett Smith during the 2022 Oscars. Following his on-stage fight with Rock, Smith returned to his seat before shouting twice at Rock that keeps his wife’s name out of his mouth. Rock responded by trying to make light of the situation before pledging not to discuss Jada. Will Smith get many bashers in the event?

After apologising to the Academy during his acceptance speech, he delivered a second apology. Will Smith expressed his regret for the night’s events on social media after giving probably the most shocking moment in Oscar history. He was then prohibited from the event for ten years by the Academy.

6.      Toni Gonzaga, a Filipina celebrity, is a victim of cancel culture for supporting a presidential candidate.

Toni received a strike of getting cancelled by people when she hosted a proclaiming event for who would become the next Philippine President after the elections. That was only the beginning of the bullying she faced because of her political beliefs.

The actress has been attacked on social media for her association with Marcos. Several have questioned her support for the late dictator’s son, given that he is linked to some of the legislators who voted to oppose ABS-franchise CBN’s application before. Toni Gonzaga has unfollowed most of her celebrity acquaintances on Instagram due to the criticism aimed at her.

Kevin Spacey is an actor and producer from the United States. During the 1980s, he began his career as a theatrical performer.

A criminal sexual assault complaint has been filed against the two-time Oscar winner. Since the news first broke in October 2017 that actor Anthony Rapp had accused Spacey of making a sexual assault on him when he was 14, more than 30 individuals have come forward with their complaints against him, ranging from harassment to attempted rape.

After the claims surfaced, Spacey received criticism, prompting many Hollywood groups to disassociate themselves from the actor. Netflix, Spacey’s agency, his manager, and the whole business have abandoned him.

Spacey, who claimed he seemed to have no clear memory of the incident, issued a sincere public apology for his improper drunken behaviour. Later this year, he is set to return to the big screen with co-stars Faye Dunaway, another cancelled celebrity.

8.      Travis Scott has a lot of criticism regarding the tragic events in the United States.

Travis Scott is a rapper, singer, songwriter, and record producer from the United States. On November 5, a tragic and massive stampede occurred during a Houston performance.

During Travis Scott’s performance, eight people died, and numerous more were injured, according to the Houston Police Department. The news comes after a Houston fire chief claimed that Travis Scott might have stopped the incident earlier.

The Houston Police Department first acknowledged that eight people died and several more were injured during the Travis Scott performance. The news comes after a Houston fire chief suggested that Travis Scott could have called an end to the action sooner.

In concert footage, he can be seen halting his set to beg for assistance for a fan who had passed out. In another video, though, he just disregarded it. The audience member claims that he may quickly halt the play if he finds something unusual. Scott expressed his sadness and sympathy for the victims’ families in an Instagram video posted shortly after the incident.

9.      DaBaby’s been attacked by his homophobic remarks.

DaBaby earned his fortune mostly from his music business, including streaming sites like Spotify, Apple Music, and YouTube. He advised attendees at the Rolling Loud event in Miami to keep their phones in the air unless they had HIV or were homosexual guys having sex in parking lots.

After statements against HIV and homosexuality were made public, he was blasted by music stars and pulled from numerous festival lineups. DaBaby has since been removed from the Lollapalooza festival in Chicago, and the Austin City Limits Festival has also stated that DaBaby will not be appearing.

Later on, he subsequently apologised for his comments, claiming that he was ignorant and needed to be educated on these issues.

Taylor Swift’s long-awaited re-recording of her album titled Red Taylor’s Version. The new album includes a ten-minute extended version of All Too Well, which the artist created eleven years ago but expanded to its entire length.

The two celebrities dated for three months in 2010. Taylor’s song All Too Well is often assumed to be about their brief romance. The album focuses on her painful and challenging romance with Jake Gyllenhaal.

The re-release has caused outrage among fans, who have flooded Gyllenhaal’s social media page with red scarf emojis and song lyrics, ensuring that he does not forget what he did eleven years ago.

After a few months, Gyllenhaal stated that he understood the backlash and that Taylor is an artist concerned with her relationship with her followers. Artists get inspiration from personal situations, and he doesn’t blame them.

Stay Connected
41,936FansLike
5,683FollowersFollow
866FollowersFollow
Previous article
20 Ways To Combat Woke Culture – Pulling 0 Punches
Next article
What is Coercive Control, and How to Fight Back?

Australia History – A Commencement To A Multicultural Society – 1950