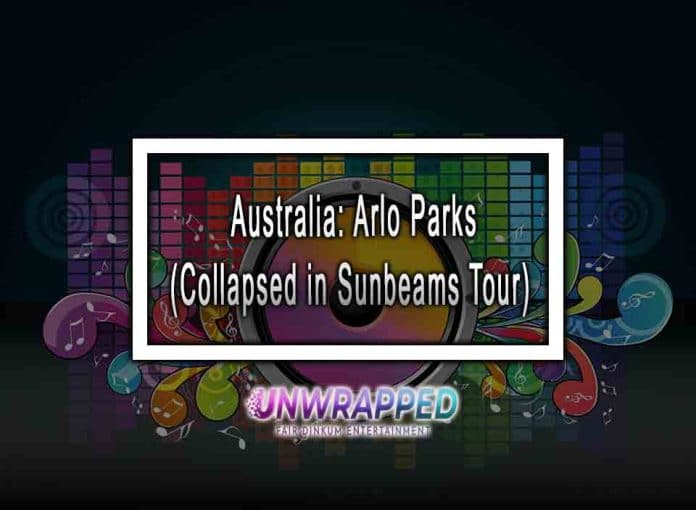 Arlo Parks has carved out her poetic indie-pop meets soul path and has emerged as an influential voice for her generation’s inquiries into identity, sexuality, mental health, and relationships. The 21-year-old has received two Grammy nominations for Best New Artist and Best Alternative Music Album after winning the UK’s renowned Mercury Prize and earning a triple j feature album. In August, Arlo will be traveling to Australia to promote her debut album, Collapsed in Sunbeams.

Arlo has been writing since she was able to weave sentences together, discovering the cathartic satisfaction of creative expression as a youngster. Her music is influenced by poets such as Gary Snyder and Mary Oliver and musicians such as Sade, King Krule, and Odd Future. Arlo began writing songs on Garageband when she was 14 years old and subsequently submitted her tracks to BBC Introducing, where she received her first interview, management, and recording deal.

Arlo’s debut EP, Super Sad Generation, established the tone for her subsequent albums, which will feature great composition and production. Her Sophie EP arrived shortly after, along with Glastonbury performances, a spot on the BBC’s Sound of 2020 poll, NME covers, COLORS appearances, Phoebe Bridgers, Billie Eilish, and Michelle Obama as admirers, and collaborations with Flume, Loyal Carner, and Glass Animals. Arlo’s distinctive style, a seamless combination of pop and soul with deep literary lyricism, is displayed in Collapsed in Sunbeams.

Collapsed in Sunbeams, set in a turbulent 2020, conveys the intense preoccupations of a generation on the verge of maturity as it is hurled into a global epidemic. Arlo Parks’ songwriting is self-evident, gently but firmly expressing her innermost feelings. On the other hand, her live performance is where she is genuinely able to bring these potential songs to life and connect with her audience in the manner that her music demands. Arlo Parks is delivering delicate clarity and stability to a generation just beginning to regain its feet after nearly two years of pandemic-related bewilderment and frustration.

Arlo Parks, known as Arlo Oluwatoyin Estelle Marinho, is a British singer, composer, and poet. Collapsed in Sunbeams was her debut studio album; it was critically acclaimed and reached number three on the UK Albums Chart in 2021. At the 2021 Brit Awards, they received her nominations for Album of the Year, Best New Artist, and Best British Female Solo Artist. It was awarded the Hyundai Mercury Prize for Best Album in 2021.