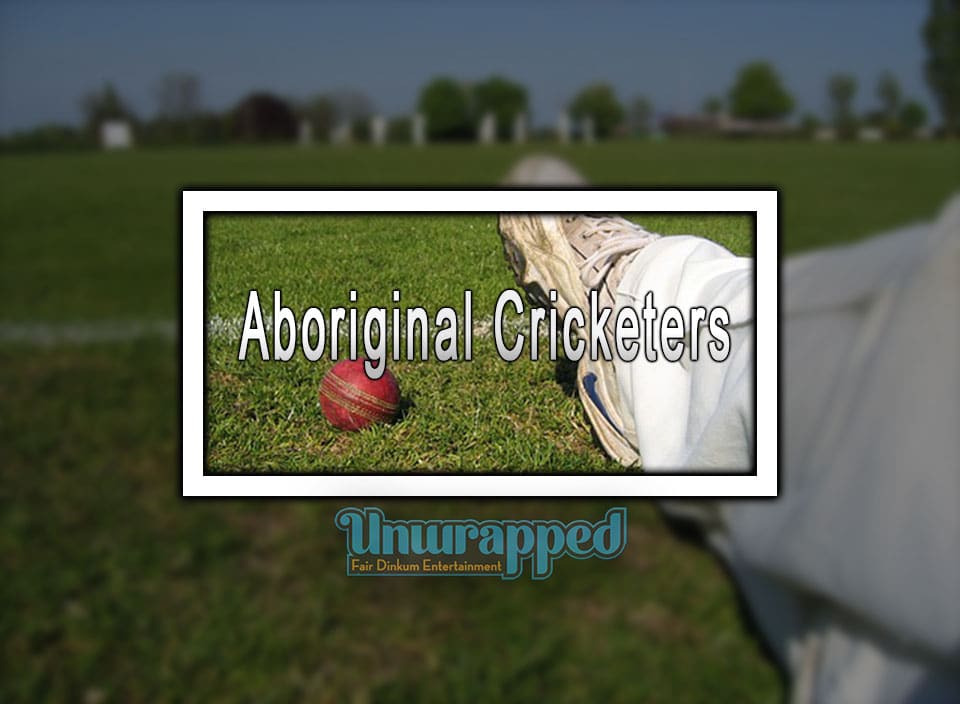 All You Need to Know About Aboriginal Cricketers

A globally popular sport, cricket is loved in many countries but more so in some than in others. Besides the UK and India, the sport of cricket is extremely well-loved in Australia. This is evident in the amazing number of skilled players and the support they receive from their large fan base both locally and from abroad.

It, therefore, comes as no surprise that cricket attracts the interest of many people regardless of their race or culture. Because the dynamic of the sport is interesting, not to mention challenging, even aboriginal people become enamoured by it. Contrary to what one may think, cricket is not a recent introduction to the Aboriginal community. Historically, Aboriginal people learned all about it even before today’s Australian population did.

Early Introduction of Cricket to the Aboriginal Population

As early as 1868, the sport known as cricket was already known to Aboriginal people. This is because the sport was brought to the continent by colonizers. With many indigenous individuals working in cattle industries, it was only a matter of time for them to pick up this sporting game from the Englishmen who populated the regional areas.

Their skilful and quick adoption of the game resulted in the creation of the first-ever team of Aboriginal cricket players. This 13 man cricket team was then smuggled out of Australia by former cricket player Charles Lawrence. Their tour which was marketed to them as a profit-generating trip lasted for half a year. The team was made to play two-day matches that totalled 47 cricket games in the course of their tour. Of the matches, the Aboriginal team lost in 19 and came out victorious in 14. Sly Charles not only made the men play cricket games, but he also had the indigenous people perform sideshow tricks to entertain paying crowds.

Unfortunately for these sportsmen, none of the profits generated by this endeavour lined their pockets as it was only the Englishman who benefited from the apparent exploitation. To make matters worse, these Aboriginal cricketers experienced racism, illness, and even death during their 6-month trip. Even though these mistreated players eventually gained the respect of the cricketing world, not much was heard about them when their tour ended. And when they returned to their native Australia, not a lot continued to play the sport.

Despite the problematic initial introduction of the sport to Aboriginal Australians, it did, however, pave the way for the game to be played widely in the country.

Also See: How to Make a Cricket Pitch?

There is no denying that the earlier years of cricket were not ideal nor fair for the Aboriginal players who populated the game. Nonetheless, their amazing athleticism has cemented their names in the history books of cricket. These players both old and new remain paragons for aspiring younger generations. These are the men and women in Aboriginal cricket whose legacies live on.

Born in South Australia, Faith Thomas was not only one of the first cricket players, she was also the first female Aboriginal player to represent Australia in this gentleman’s game as well as in any other sport. Faith’s father is of German descent while her mother is an Aboriginal woman who belonged to the Adnyamathanha indigenous group. Before this talented bowler got into cricket, she worked as a nurse for the Royal Adelaide Hospital. It was during her tenure that a work colleague introduced her to the sport. This right-handed batter and bowler played many Test matches for the national team of Australia. Since her debut in 1956, she was the only Aboriginal cricket player up until 2019. Now 88 years old, Faith was also an active hockey player in her younger years.

When it comes to playing Test cricket professionally, Jason “Dizzy” Gillespie is still one of the most recognized Aboriginal cricketers belonging to team Australia. A member of the Kamilaroi people through his dad’s side, Jason managed to score 259 wickets in over 70 Test matches. Famously known for his curly and long flowing locks, right-armed cricketer Jason also played various cricket formats during his prime. Now retired, he continues to show his adoration for the sport by coaching elite cricket teams. He is also well-known for his vegan advocacy and his staunch criticism of dairy farming. This, even though his beloved sport uses balls that are crafted from leather materials.

As part of the original team of Aboriginal cricketers to tour England in 1868, Johnny was one of the 13 players who managed to play 47 matches in just 6 months. He is part of the Jardawajali people who lived more than 15 kilometres from the farmland he worked in before he got recruited to join the touring team. At the peak of his cricketing career, he scored nearly seventeen thousand runs in roughly 20 pitches. This all-star cricket player was easily one of the top scorers during his day. His skill and prowess on the field caught the attention of many cricket players and fans in 1868. According to records, “black Johnny” as he was dubbed, had completed his England tour with over 240 wickets.

Up and coming cricketer Ashleigh is just 24 years of age. She debuted in her first Women’s T20 International match just some 4 years ago (2017). And in less than 30 days this talented all-rounder played an ODI cricket match for the women’s division for the first time. As of her introduction to professional cricket in 2017, she is known as one of the original Indigenous Australian women to have participated in the World Cup where her team played against Pakistan. Although her career is still in its infancy, this Marwari woman has already garnered the top score in the history of WBBL. Ashleigh holds the record of 114 off over 50 balls. At the moment this promising sportswoman has yet to play her first-ever Test match. For the time being she is busy playing in the WBBL under the Sydney Sixer, and in the National Cricket League for New South Wales.

Aggressive right-arm and fast-medium bowler Dan Christain hails from a Wiradjuri bloodline. This Aboriginal cricketer is highly lauded for his amazing capabilities in T20 matches. Aside from Twenty20 games, this short form cricket player has also represented Australia in ODI tournaments. One of his biggest achievements was leading his team to victory in a T20 match against Nottinghamshire in 2017. He has recently joined the Indian Premier League as a squad member of the Royal Challengers Bangalore. In his latest match, Christian managed to become a pioneer Aussie cricketer to score in a Twenty20 match, a hit of five sixes. This 38-year old cricket all-rounder is one to look out for.

Similar to Mullagh, Johnny Cozens was a part of the first cricket team to have represented Australia in the 18th century. Sadly, there is very little information about this founding member of Aboriginal Australian cricket. It is said that their team was led by a white cricket player by the name of Tom Wills. And though Cozens was never captain he was highly regarded as a top bowler. Records indicate that during a Boxing Day match he was able to score 7 wickets against the premier squad, Melbourne Cricket Club.

Probably the only Guilidjan cricket player to represent an Australian team, Scott Boland is a cricket bowler with amazing stats. Thirty-two-year-old Scott became interested in the sport at the tender age of six when he competed in the under 12 division as a member of the Parkdale Cricket Club. Since then he joined various squads in his teens. Interestingly enough, his strong and early start in the game did not fast track his debut in the professional league. Boland started his cricket career on the local scene, but it wasn’t until his fifth year did he begin his international one. He premiered in the global cricketing tournament when he participated in a T20I match against India in 2016. A right-handed bowler who is also capable of batting on the same arm, Boland’s rise to fame is a slow and steady one. Yet he continues to give pride to his Australian Indigenous community.

Even before he got into cricket, Jack Marsh was already a familiar name to many people in Australia. This was because Marsh was a top-notch and accomplished sprinter before he even took up the sport of cricket. This equally successful cricket star happens to be known as Australia’s fastest man. Born in 1874, first-class cricketer Marsh was a fast right-arm bowler whose ancestry is Aboriginal Australian. He has a total of six matches credited under his name when he represented New South Wales in the 1900s. His speed proved to be a terror to many batsmen in his prime. It is said that he has managed an average of 21.47 scoring a total of 34 wickets in the process. Though he was regarded as one of the best, his cricket career did not experience as much growth as most cricketers with many pointing toward racial discrimination as the main problem.

Also See: The State of the Aboriginal Community in Australia and its Future

Queensland-born Edward is said to be one of the fastest bowlers of Aboriginal ancestry to be produced by Australian cricket. Of his accomplishments, Eddie’s ruthlessness and aggression during a match ended up with him knocking a bat out of the grasp of another player’s hand. Eddie, who used to work on farms honed his bowling skills at a very young age. This once slow-paced bowler eventually played in countless first-class matches, he has 87 wickets total with an impressive 28.97 cricketing average. He played for over 5 years before retiring from the sport. A bronze statue stands in his honour just outside Allan Border Field.

This 19th-century cricket player originates from Lowood Queensland. As Eddie, Albert is another bowler with an impressive pace. This right-handed first-class cricketer debuted in a March 1902 match between NSW and Queensland. As per records, Albert is recognized as the first-generation Aboriginal cricket player to represent his native Queensland. His premier into the professional arena was met with much fanfare because it was the first time that two opposing teams played with Aboriginal Australian cricketers. The first-class cricket event was widely covered by the media but was not the last that these Indigenous cricketers played against each other. Due to poor health, Henry’s sporting profession was cut short, he passed at the age of 30 from tuberculosis.

Who was the first Aboriginal cricketer?

Jason Gillespie is from the Gamilaraay tribe and is the first Aboriginal player to play cricket in Australia. Born in 1975, he was a pace bowler known for his focus, aggression and fitness. In his 71 Test career, Jason took 259 wickets averaging 26.13.

Indian Female Cricketers Who Are Married