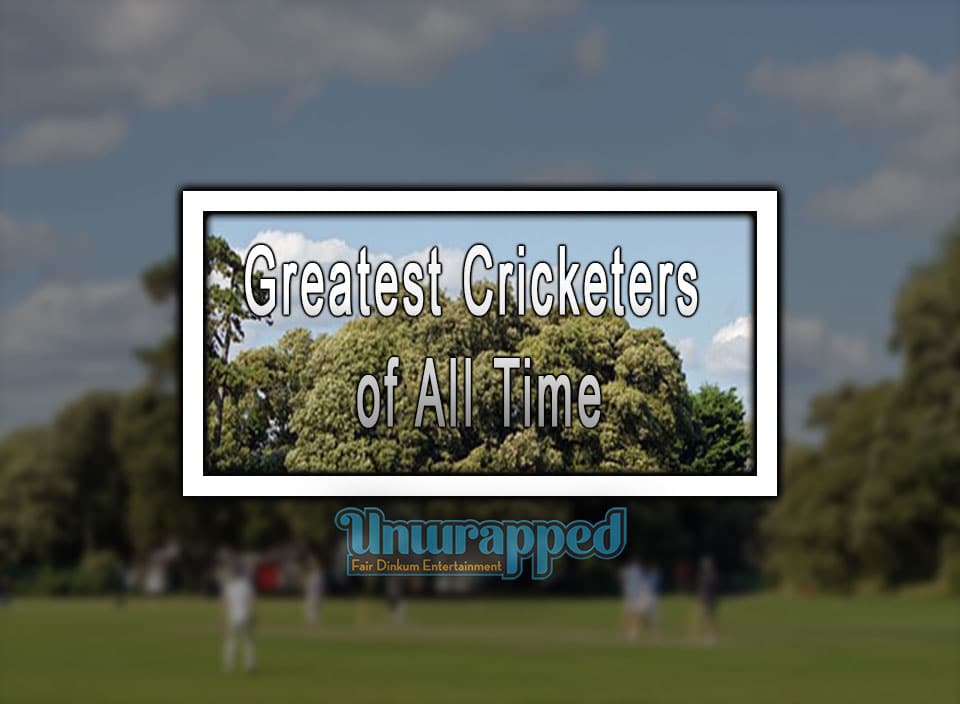 Top 10 Greatest Cricketers The Game has Ever Seen

Cricket is a sport to which many players have dedicated their lives. Regardless of their role as a batsman or bowler, or wicketkeeper, their primary purpose is to play incredible shots and achieved the milestone, in addition to making their country and fans proud of them. Numerous players in cricket thrived their careers and engraved their names in crickets history. Let’s lookup for the ten greatest cricketers of all time:

Sir Donald George Bradman, popularly known as Don Bradman, is one of the most prominent cricketers of all time who holds the historical record of 99.94 average test and scored 6996 runs, and no one ever beat that to date. In 52 Test Matches, Don hit 29 centuries where 10 were doubles, and 2 were triples.

Throughout his cricket life, Don hit 117 centuries — 234 matches, 338 innings. No cricket player in history has ever come close to this score. However, his battling style was slightly different; thus, his batting technique was adopted in the field and named after him.

One of the greatest cricket players of New Zealand for almost two decades, Sir Richard Hadlee, practically took the New Zealand cricket game to the next level.

Richard’s debut was at the age of 22 in 1973 against Pakistan. In 1976, his bowling skill was one of the eye-pleases when he smashed seven wickets of the Indian team. Soon his blazing talent made him the first cricket player to hit 400 wickets in a Test match. Along with the most prominent bowler, he was an aggressive batsman as well.

In 1978 against England, she knocked off ten wickets brilliantly, in which 6/26 in the second innings. During the 1980s era, Richard was among the top 4 greatest all-rounder players along with Imran Khan (Pakistan), Kapil Dev (India), and Ian Botham (England).

In 1990 against England, Richard set a record of 5/53, including the last ball delivery wicket. After the match, Ricard got his knighthood and retired from cricket with glorious 431 wickets — 86 Test. However, his retirement created a little havoc as he was the gem of every match.

Post-retirement briefly, he was one of the sports media people, and then he served as a New Zealand’s selector chairman.

Sir Vivian Richards, also famously known as Viv Richards, is one of such legendary cricket players that makes the crowd walk with him. He never wore the helmet, but the cap and all you can hear are loud cheers when he walks towards the cricket ground.

For 30 years, Viv was the highest record holder until, in 2006, Mohammad Yousuf, Pakistani cricketer, broke his record. Viv Richards’s unique playing skills contribute to West Indies winning not just one but two World Cups in 1975 and 1979.

In 1999, the Antiguan Government made him a National Hero — Knight of the Order. The following year, Viv’s name was printed in Wisden Cricketers, the top 5 players of the century. In addition, a cricket stadium was built in Antigua to honor his name, where the Cricket World Cup 2007 was played.

Wasim Akram, the left arm Pakistani most outstanding bowler who made his debut in 1984 at the second ODI match versus the New Zealand team, without even played any first-class matches. On his first match, he swamped ten wickets and grabbed everyone’s attention. Soon after that, Wasim again played against New Zealand in Auckland, and he hit five wickets. He was then popularly known as “King of Swings.”

Things didn’t go well with Wasim; he was forced to take a break from the game around the late 1980s due to his injury. However, after his recovery from multiple surgeries, Wasim returned to the game and played a critical role in winning the Pakistani team against England in World Cup 1992. England lost the match by 22 runs. Teamed with Waqar Younis, the duo — Wasim and Waqar played the unbeatable game.

Later in World Cup 2003, Wasim recorded 500 smashing wickets and became the first player globally to hold the record in 50 over game format until in 2007 Muttiah Muralitharan break his record and score 502 wickets.

After his retirement in 2003, Wasim Akram decided to take the commentator position. Wasim was also played a critical role in coaching KKR (Kolkata Knight Riders) IPL team to help them win in 2012 and 2014.

Another greatest player of all time in cricket history, the Trinidadian player Brian Lara. Though he played for Junior Trinidad’s tennis side and soccer during his school life, he was always attracted to cricket. At 14, he was selected for the Under-16 team of Trinidad after he scored 745 runs. Later in a year, he was established in the Under-19 West Indies team.

Finally, at the age of 20 in 1990, Brian was appointed as the Captain of Trinidad and Tobago; he was the youngest ever captain. In the same year, as Viv Richards wasn’t able to be in the game, Brian was handed the match, and he made his debut against Pakistan with scores 44 and 6.

Soon after that, Brian established his career representing the West Indies team, and during World Cup 1992, he opens the batting and scored 333 runs. In 1994 he scored 375 against England and earn the title as the first player scored 400 in Test matches. After a week, he hit a 501 score against England, and he surpassed Pakistani cricketer Hanif Mohammad’s score of 499.

Brian was unstoppable ever since then, with every test match he cut a century. He helped West Indies to win the game against Sri Lanka with 169 runs in 129 balls.

In 1999 his score of 153 against Australia ranked as second in the Test match history. Later in 2994, Brian scored 400 against Antigua and earned the highest Individual player scoring in Test matches.

One of the most prominent spinners in cricket history, Muttiah Muralitharan, made his debut in 20 years in 1992 against Australia and smashed two wickets.

The Australian Umpire created an issue for Muttiah’s bowling style at the beginning of 1995 during the match in Australia. As a result, he was charged seven times for his bowling style — bending the arm and flicks the ball, which should be a straight throw. But later, when he delivers the same style throughout the matches, the arm remained in the same position. Finally, after a decade, the physiology of Muttiah’s arm is declared a natural deformity, and thus they accepted the style by the ICC.

No controversy can stop Muttiah from delivering a fantastic bowling stint. Muttiah record 700 Test wickets in 2007 and became the second greatest bowler. In 2009, he broke Wasim Akram’s record, Pakistani’s most prominent bowler, by smashing 502 wickets (Wasim’s score was 500 wickets). In the following year, Muttiah beat his record of 800th wicket in a Test match and was recorded in cricket history as the first bowler to reach an unbreakable record. In 2011, Muttiah decided to retire from cricket.

Muttiah took 500 ODIs and 800 Test matches wickets throughout his career and became the first cricket player to record more than 1000 wickets.

One of the best batsmen globally and Australia’s one of the popular cricket players who achieve an immense reputation at a young age, Ricky Ponting scored four centuries in Tasmanian cricket week in the Under-13 team and two centuries when he was in Under-16. Ricky made his debut at the age of 20 in 1995 against Sri Lanka, and people began to recognize him as the new Sir Donald George Bradman.

Mocked as “God of Cricketer” in India and globally, Sachin Tendulkar is the legendary name that has been still inspiring many cricket fans even after his retirement in 2013.

At the age of 16 years, Sachin made his international test debut against Pakistan in 1989. He has completed more than 34,000 runs in International matches, the first player to score a double-century in ODI, and the only cricket batsman scoring 100 international centuries.

Sachin is the first Indian batsman and 16th cricket player globally to achieve a combine of 50,000 runs in domestic and international cricket history.

Sachin played a significant role in India winning the World Cup in 2011; Sachin’s first win after the Six World Cup. Sachin was the only cricket player from India mentioned in 2013–Wisden Cricketers’ Almanack 150 Anniversary.

Sachin holds the history of scoring the most runs (2278 runs) throughout his performance in six World Cup performances (1992 to 2011). In 2013, the Indian Postal Service released the Sachin Tendulkar stamp. After Mother Teresa, he is the second Indian to get an honourable stamp released.

Jacques Kallis is the third player in the history of cricket who scored more than 13,000 runs and 250 wickets in Test matches and ODIs. Jacques made his debut in 1995 at the age of 20 against England.

Jacques was identified as one of the most hard-hitters in the world of cricket due to his incredible skill of always looking for scores and playing at every angle. Jacques is one of the players, including Sir Donald Bradman, Gautam Gambhir, and Mohammad Yousuf, to set a record of hitting a century in 5 back-to-back matches in the 2003–04 season.

Jacques played for the RCB (Royal Challengers Bangalore) IPL team for three seasons, and later, he was chosen by KKR (Kolkata Knight Riders).

Abraham Benjamin de Villiers is the most versatile ultimate player in cricket history, popularly known as AB de Villiers. In addition, he is ranked among the finest batsman in the world.

Ab de Villiers is a God gift in sports — cricket, badminton, tennis, golf, and rugby. He is an all-rounder and capable of maintaining his skills in all five sports. Due to his versatile sports talent, he could pull off any role needed to defeat the opponent, even with batting 360 degrees, making even the fastest bowlers speechless.

Ab de Villiers made his debut at the age of 20 in 2004 against England, where he was picked after 16 first-class cricket matches, smacked 52 in his 4th innings, and saved the South African team. Ab de was the opening batsman in that match, and later, he was moved to keep wicket. He never looked back since then and has performed well in whatever position he was offered. In the following year, during his first tour — Caribbean Islands, he scored 460 runs.

In 2008, out of 109 balls, he scored 103 against West Indies in Durban, and in the same year against India in Ahmedabad, he was the first-ever South African to scored a double century (217 runs).

Ab de Villiers is the second-highest batsman in South Africa and performed exceptionally well in 223 ODIs — 213 innings 9427 runs in total. Ab de is also the fastest player, reaching 1000 Test runs and achieving his milestone in 2005 in 20 innings.

It has been said that Test matches are the toughest matches among all, and it is critical to perform. The reason Test match success created a significant impact in any player’s life. Over decades, we have witnessed numerous crickets set a new benchmark, inspiring many others.

Also See: What is Wasp in Cricket?