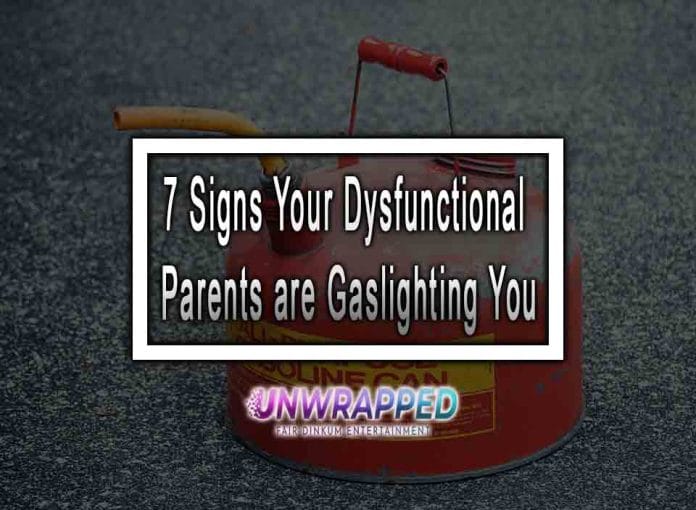 In general, parent-child interactions are complicated. It might be difficult to tell whether the problems transcend beyond usual family squabbles and into harmful, poisonous terrain. Recognizing the problem, especially in the case of gaslighting, a perplexing and deceptive kind of emotional abuse necessitates a high level of awareness. Here are some symptoms that your parents are gaslighting you, as well as some typical words they could use and strategies you can take to recover.

Any sort of manipulator gaslighting begins with the erosion of your self-esteem. It’s considerably more difficult to persuade someone who has a lot of confidence. When it comes to gaslighting parents, things are a little different.

They’re beginning from the ground up if you will. They have these tiny humans that rely on them for security. Attachments between parents and their children are expected to be secure. These bonds enable toddlers to fearlessly explore the environment. Furthermore, a youngster who is confident and self-sufficient will challenge what you say and do. As a result, gaslighting parents must begin at an early age. They don’t want confident youngsters, so mocking them and making them feel foolish is one approach to avoid this.

They aren’t concerned with the child’s well-being; rather, they see the child as a symbol of themselves in the larger community. They are adamant that they know best for the youngster. It won’t matter to them how the youngster feels or what his or her life ambitions are.

2.  They decide things for you

It’s pretty unusual for parents to do this when we’re kids. They probably remember the first time you tasted pickles and sobbed for 25 minutes better than you do. You’re an adult now, and you’re the only one who can decide what you like and don’t like. If your parents keep attempting to persuade you that you’ve stated unequivocally that you’d never want to go to New York, they’re deliberately trying to make you doubt your own judgement, giving them more power.

3.  They tend to dismiss your problems

Whether it’s a disagreement with your closest friend, a shattered heart after a breakup, or the pressure of obtaining excellent grades and performing well on finals, your parents just don’t realise that, while the challenges you’re facing may not appear to be significant to them, they are significant to you. They don’t even bother to attempt to understand you; instead, they simply urge you to go on or forget about it.

Another clue that you’ve been duped is if you’ve been gaslighted. A gaslighter’s main purpose is to encourage you to examine your own thoughts and feelings. Let’s pretend you’ve gone to bed because of a split. Your parents are baffled as to why you’re making such a big deal over it and can’t believe you’re cancelling dinner arrangements because of it. He doesn’t have to, so that’s OK. However, stating “you’re making too much of this” is poisonous, but expressing “I don’t know what you’re going through, but I’m so sorry this occurred” is far more empathetic.

5.  They deny your shortcomings

This applies to any relationship in which you feel someone is gaslighting you. You know something is wrong in your reasonable mind, yet when you bring it up, you’re faced with complete denial and sometimes even a “You’re insane.” “What are you talking about?” says the narrator. This is another tactic for them to make you doubt your own sanity while deflecting criticism away from themselves.

6.  They shift the blame towards you

A gaslighting parent will never take responsibility for their actions or apologise to them. What makes you think they’d do something like that? All of their previous ruses would be made ineffective. They will instead wait for the youngster to apologise.

They’ll deny, deny, deny till the cows come home and you’re exhausted. If you get near to finding the truth about a problem, they will become enraged and change the subject. They’ll accuse you of being unappreciative of your parents’ efforts to raise you. They’ll shift from accusatory to self-pitying techniques. You’ll quickly regret bringing it up in the first place.

7.  They never just take your word for it

They aren’t concerned with the child’s well-being; rather, they see the child as a symbol of themselves in the larger community. They are adamant that they know best for the youngster. It won’t matter to them how the youngster feels or what his or her life ambitions are.

Children raised by a gaslighting mother lose their capacity to trust their own senses, and physiological cues, and make clear judgments based on their own somatic experiences.

Read on: What Is Gaslighting in Relationships?

Did you relate to any of these?

The purpose of gaslighting is to perplex and terrify someone so that you may manipulate and control them. You might have been accused of something you didn’t do or say, or a gaslighter could pretend they never said it if you approach them. My mother would try to persuade me that I was the one who did anything awful when I was a youngster if my sister did something bad. My mother would try to take credit for whatever I accomplished. She’d accuse me of saying something I hadn’t intended to say.

My mother let me go through it as an adult despite knowing she was going to hurt me. You were most certainly gaslighted if you felt bewildered, guilty, or like a horrible person when you weren’t. A part of me understands why some people want children but can’t have them, and why some parents are nasty and neglectful to their children.

Also See: How to Spot and Fight Gaslighting by Parents

5 Highest Grossing Movies by Brad Pitt of All Time

5 Highest Grossing Movies by Christian Bale of All Time