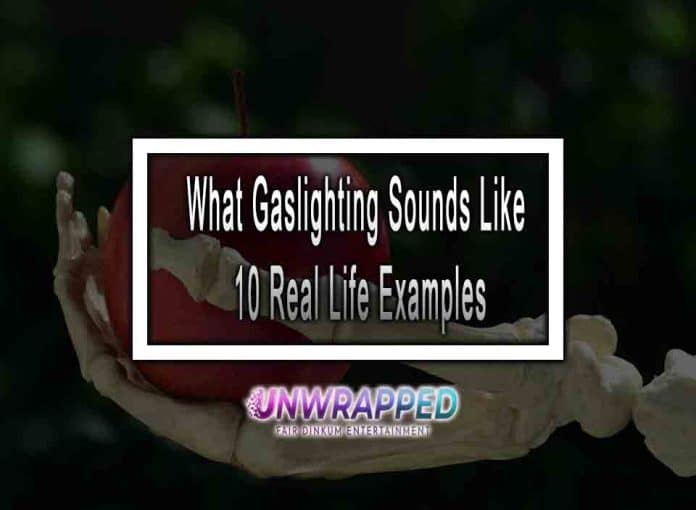 Furthermore, because the victim may be unaware that they are being gaslighted, the repercussions of gaslighting may make leaving an abusive relationship much more difficult.

Here are several examples of how Gaslighting might be heard:

Gaslighting frequently leads to the victim’s self-doubt. Tina B. Tessina, PhD, a psychotherapist and certified marital and family therapist in private practice, believes that someone will do or say something harmful and then deny it ever happened.

The victim begins to doubt [their] intuition, relying more and more on the reality that the abuser creates and manipulates. It also increases the victim’s sense of dependence on the abuser.

“Everyone around you is a problem, the problem is you.”

For whatever reason, this is occasionally used to put an end to a debate or a disagreement. When the person who is gaslighting makes statements that make the other person feel like they are the issue, even if they have been the victim of bullying or abuse, this is known as ‘victim-blaming.’

“I’m sorry you feel that way.”

This remark may appear to be an apology, but it isn’t. Instead, Tessina believes that this is a technique for an abuser to deflect guilt and place it on the victim.

This type of apology makes the victim doubt their own judgement and makes them wonder whether they truly did overreact. It may cause the victim to depend on the abuser’s version of events.

” I don’t remember saying that. I think you’ve made that up.”

Gaslighters use this statement to dismiss and invalidate the victim’s sentiments.

The gaslighter may tell the victim that they are making a big deal out of nothing if they try to communicate their hurt or disappointment.

The goal is to make you feel ridiculous for trying to defend yourself in the first place. Once an abusive spouse has undermined the victim’s capacity to trust their own observations, the victim is more likely to tolerate the abuse and continue in the relationship.

“It’s your anxiety that made me do the things I do.”

This is another tactic for an abuser to shift the blame on the victim. This might make the victim feel guilty or hurt over a scenario in which they did not do any wrongdoing.

Gaslighting entails manipulating facts to avoid taking personal responsibility for their actions. The gaslighter throws the responsibility on the victim for not just speaking out but also the abuser’s response by stating they should have known better.

The gaslighter may also attempt to persuade the victim’s relatives and friends that they are mentally ill to invalidate any accusations the victim makes. This reduces the possibility that the victim’s story will be believed, as well as cutting them off from the resources that might allow them to escape [an abusive relationship].

Gaslighters relieve themselves of any responsibility for their actions or the situations in which they find themselves. Instead, they’ll blame others; this might spiral into a vicious loop in which you’re led to feel that something is your fault when it isn’t. You can even apologise for things that aren’t your fault to make peace with someone.

Gaslighters use this statement to dismiss and invalidate the victim’s sentiments.

The gaslighter may tell the victim that they are making a big deal out of nothing if they try to communicate their hurt or disappointment. The goal is to make you feel ridiculous for trying to defend yourself in the first place. Once an abusive spouse has undermined the victim’s capacity to trust their own observations, the victim is more likely to tolerate the abuse and continue in the relationship.

People who gaslight others have a propensity to minimise the impact of their actions on others. They may make you feel as if you’re exaggerating something when you’re perfectly entitled to talk about what’s upsetting you and healthily express yourself.

“Why are you so defensive all the time? You are attacking me.”

When confronting a gaslighter, this is a popular expression. They have a propensity to turn the topic around on you and make it seem like you’re the one who’s at fault. They’ll argue that you’re being defensive and that by attacking them, you’re making them the victim.

I’m here to tell you that you’re enough. That WE are more than enough. It’s not because of us. We would never do such a thing. They were always the ones who had to shoulder the brunt of the burden.

More Self Help: How to Spot and Fight Gaslighting by Parents