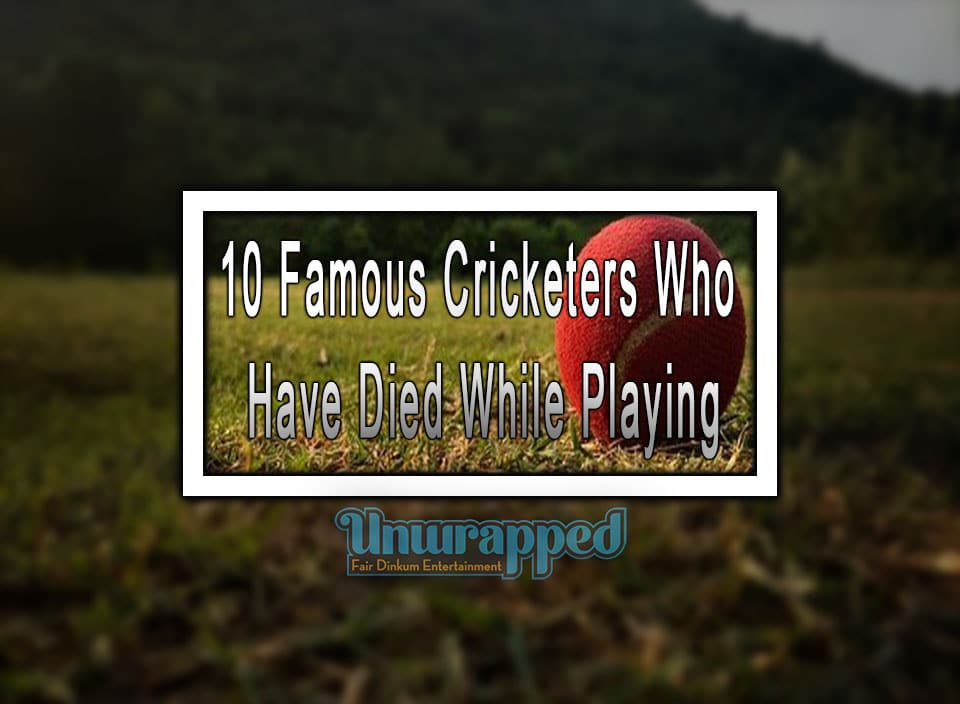 Top 10 Cricketing Legends Who Laid Down Lives While Playing

Like basketball or football (aka soccer), the game of cricket is just as popularly played across the globe.  In fact, it ranks second on the list of sports being enjoyed by countless people. Though for some, the game may appear foreign, it’s been an established sport for hundreds of years. Originating from England, cricket in its modern format is favoured by both former and present members of the Commonwealth.

Currently, the International Cricket Council recognizes over a hundred nations that partake in the sport. In several South Asian countries like Bangladesh, India, Pakistan, and Sri Lanka, cricket is the most popular of all the sports being played. The same can be said for Australia, the Caribbean (the English-speaking countries) South Africa, New Zealand, and Zimbabwe which is commonly referred to collectively as the West Indies in cricketing parlance.

At a first glance, those who are new to the sport would not stop to think it to be somewhat deadly. After all, it does not appear to be as dangerous compared to thrill-seeking activities like skydiving, big wave surfing, car racing, or bullfighting to name a few examples. Over the years, countless players have lost their lives whilst participating in sporting event. But before we give you a rundown of cricketers who have met their untimely end, let’s first understand what the sport is really about and how it is played.

A Quick Overview of Cricket and Its Gameplay

Composed of two opposing teams, cricket is a bat and ball type of sport. Generally, each team is made up of 11 players. Matches are played on an oval-ish grassy field, the centre of which is called a cricket pitch. This flat strip of ground is around 20 meters or 22 yards in measurement. Each end of this pitch has three stumps (parallel wood stakes) that are driven into the ground vertically, with two bails (small crosspieces) laid atop it. Fans of the sport and avid players call this structure a wicket.

Similar to America’s favourite pastime – baseball, cricket is also played with a ball, bat, and innings. The equivalent of a baseball home run is a “sixer” which allows cricket players six runs with just one hit.

The primary objective of the game is to score the most runs against their opponent. Every gain begins with a coin toss, the winner gets to decide who gets to field and who gets to bat first.

During the game, all 11 players are expected to be on the field even though only two batting team members are permitted to be on the playing ground. The fielding team selects one bowler whose job is to try and hit the wicket with the ball, the remaining members of the fielding team are called fielders. One fielder, also known as a wicket-keeper is designated behind the wicket. His duty is to catch the ball in the event that it misses.

On the opposite team, the batsman’s role is to try and hit the ball that is bowled before it manages to hit the wicket. The remaining fielders chase after the ball once the batsman successfully hits it. The batsman then ensures that the ball does not hit the wicket, he achieves this by batting away the ball. Furthermore, scoring a home run would require both batsmen to run from their wickets towards the other as many times once a ball has been hit.

Without a doubt, the sport of cricket is a fun but aggressive game. Therefore, for a player to become injured while playing is not uncommon. Many who encounter injuries are able to recover fully. That said, there are still numerous cricket players who weren’t as lucky. These are the top names in the sport that are still remembered today.

Regarded as a first-class wicket-keeping batsman, Abdul hails from Karachi, in Pakistan. In his entire career, he had played in eight first-class cricket matches. His untimely demise is thought to be one of the most fatal events to occur in the history of the game.

His cause of death is the direct result of a slow off-bra delivery that impacted his heart hard enough to result in his passing. Bowled by Dildwar Awan upon batting in the first inning of a cricket match in 1959. At the time, Abdul was getting ready for the next ball when he suddenly collapsed on the field.

Further findings showed that the impact to his chest aggravated an underlying and undiagnosed heart condition. A ball striking the chest is one of the worst injuries that a person whether a pro athlete or not can experience.

What appeared to be a lucky day for Richard who managed 5 wickets for just 31 runs soon became a tragedy. After his amazing haul for Pedmore CC, he fell to the ground from a heart attack.

Though there were attempts to revive him, he was pronounced dead on arrival at the hospital. Richard Beaumont is one of the top cricketers and to date is regarded as one of the best to have ever graced the cricket playing field.

Known as a powerful batsman, he was named by Wisden as a cricketer of the year in 1920. In the course of his career, he sustained countless injuries that caused him to miss out on a handful of matches.

But of the ones he did manage to play, one would take his life. Whilst playing a wartime cricket match at the Lord’s Stadium, Andy Ducat suffered a heart attack. His passing was instantaneous because of the stroke that occurred while on the field.

Ian started his cricket career in 1982 as a seam bowler. Eventually, he became one of the top spin bowlers of his time. Within two seasons, he managed to average less than thirty as a spinner and had grabbed a total of 129 wickets. Ian was no stranger to injuries, having sustained one, and was excluded from games after the Jamaica and Zimbabwe cricket tour.

While battling Workington, in Whitehaven some two years after his injury, when he encountered a freak accident. During the game, a ball hit him just underneath an eye. He was taken to the nearest hospital for eye surgery. Unfortunately for his loved ones, and fans he died of a heart attack on the operating table amidst the administration of anesthesia. His death was ruled as negligence on the part of the hospital, he was only 30 years of age.

Considered as one of the top fatalities of the sport, Philip Hughes was a player representing Australia. Besides playing for South Australia, Worcestershire domestic team, he also donned a jersey for New South Wales.

This left-handed batsman is said to be the youngest cricketer to have scored centuries in both innings of one Test. His accidental death was caused by a ball hitting his neck. The incident resulted in a verbal artery dissection, of all the 100 cases of similar incidents reported, it was only Hughes who suffered death via cricket ball.

At the time of the occurrence, Philip was rushed to a hospital in Sydney where he went into a coma. He was under intensive care but his injury was too much for his body, his struggle ended just three days before he was to celebrate his birthday.

Born in Bengal, India, Ankit Keshri is a right-handed player. Though he never got the opportunity to participate in international matches, he was a known local player.

While fielding, he rushed to take a high catch, unfortunately, confusion ensued. He and left-arm pacer Sourav collided as they rushed for the catch. Though this accident is a fairly normal occurrence on the field, it was a first for Ankit to encounter. He lay unconscious on the ground and was seen bleeding from the mouth. He soon passed while receiving treatment in the hospital.

Popularly known in Bangladesh’s Dhaka Premier League, Raman was an Indian batsman and occasional bowler Three hundred and twelve runs against Himachal Pradesh, is credited to Raman’s skill as a batsman.

It was a ball hitting his temple during a 1988 cricket game while fielding that caused his death. The impact of the ball was discovered to have caused an internal hemorrhage, he became comatose and eventually passed on.

Not only was Wasim a cricketer, but this Punjab-born Pakistani also had a career as a match referee, cricket coach, and British- Pakistani headmaster. His brother is Ramiz Raja, a notable Pakistani commentator.

Wasim’s death is from an intense heart attack that took place during a cricket game. In the course of his career, Wasim was an amazing batsman who delivered terrific attacks with his bat. But this wasn’t the only thing he was good at, this multifaceted player also bowled well and had 17 centuries and 558 wickets.

A hit on the head with a ball was the primary cause of death of this South African cricketer. This right-handed batsman met his early demise while representing his team in a match between Fort Hare University, and Old Selbornians.

In his youth, he played in various provincial teams and had also acted as coach for a well-known cricket academy. He was only 32 years old when an attacking ball hit him. Reports state that he was announced dead on arrival at the hospital he was rushed to. Young as he may be, he is thought to be one of the most popular cricket players.

While not as internationally popular as the rest of the players on the list, Raymond is a star in Namibia. He represented his nation in over 200 matches as a batsman.

This young player suffered a stroke during a match he was participating in. Although he valiantly fought to survive, he was unable to recover from the fatal attack. He passed away at the age of 25 and continues to be remembered by his fellow Namibians.

Seeing as there are numerous casualties to playing the sport, it now begs to question – why do people play it still? Is it truly beneficial?

It may appear that the game involves a lot of standing around, however, in order to be a cricket player, one must be physically fit and strong. Good hand-eye coordination, as well as skills in handling the ball, is necessary. The sport does involve a lot of sprinting especially between wickets. It also involves a lot of running in order to stop the ball, throwing, and bowling.

Therefore, it comes as no surprise that there are several health benefits to playing cricket. The most common advantages are as follows:

Aside from the perks of the sport to human health, players also attest to other opportunities that the gameplay has brought about, some of them are:

Like any other sport, injuries are part of playing cricket. Though many of the injuries and causes of death recorded in the sport are health-related, there are still a few that were unintentionally dealt with by the hands of other players.

These accidents are not to anyone’s liking, and it should be understood that these devastating events not only affect the players who have passed and their families, it also leaves a deep scar on the individual or individuals who have inadvertently dealt the final blow.