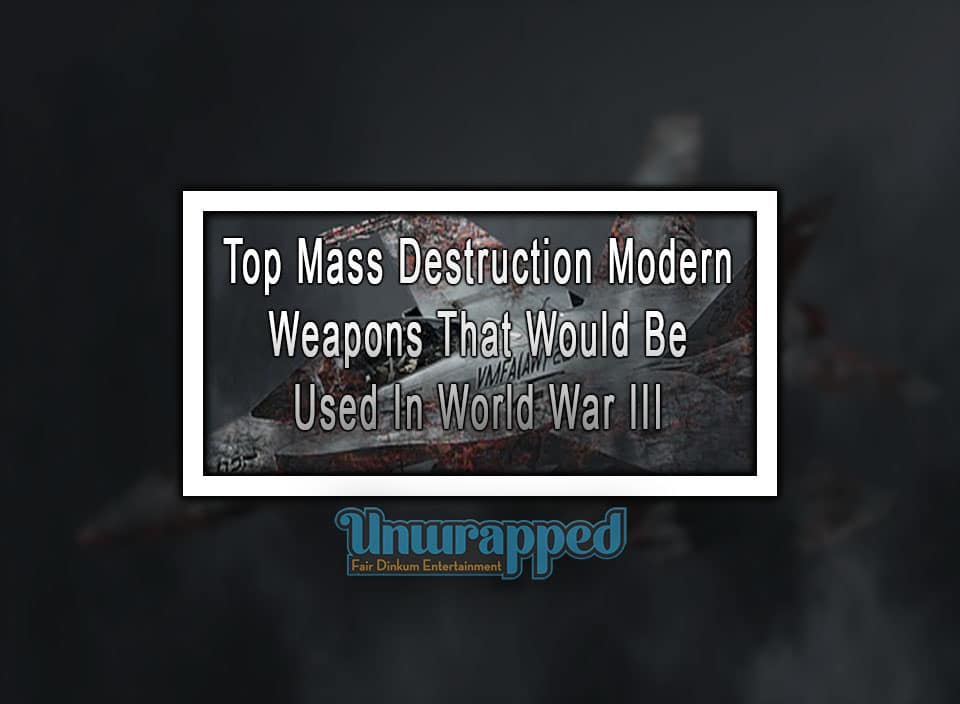 Most Deadliest Weapons That Would Be Used In World War III

Atomic bombs are almost ancient history by now and thank God for that. But, since this is a modern, high-tech mass destruction we’re talking about here, most of the weapons on the list will sound like SCFI, but we assure you – they’re very real. However, some of these are still being developed or still being tested. But they’re definitely coming, unlike the Winter in Game of Thrones. Also, there will be a few smaller honourable mentions for all you classic gun lovers. So, here you go and enjoy. Well, don’t enjoy mass destruction, just the technology of it. In the meantime, let’s try and avoid WW3, all right?

The name says it all. It’s basically a large remote-controlled drone that can cause a lot of damage while the pilot is not in any danger since there is no pilot inside.

The U.S. Department of Defence (the Pentagon) demonstrated a swarm of 103 artificial intelligence small drones. They fly as a team, collaborate and can self-heal. Its purpose is to get close enough to obtain an enemy’s information. And due to their micro size, most types of anti-air defence systems can’t detect them.

See More : What To Do If The World Ends Right Now?

This is pretty much a wearable machine. Simply put, it’s a robot for men. You get in it, and you control it. Of course, you also get a lot more strength, endurance and protection. You can carry more weight and therefore a lot of heavier armour and weaponry. You become a human-robot.

So, unlike the previous one, this robot doesn’t need you anymore. Wars can now be fought without losing any human lives. However, since the A.I. robots don’t make errors as humans do, how long would the war last? Until the planet is all up in flames? Or until the “poorer” side of the war loses all of its robots? This one is probably the most shocking. Take a look at the video.

This one is actually terrifying since it can burn through nearly anything from a dazzling range of 1.6 kilometres.

Also See : Best Weapons To Use For Self-Defence In a Post-Apocalyptic World (Top 10) Part 2

This one is caused by detonating a nuclear weapon in the atmosphere over a particular target. Its purpose is to then generate an electric and magnetic field that instantly disables a nation’s power grid, leaving it pretty much without anything – electricity, power, food, water, systems of communication and transportation. Simply put, it leaves a nation completely defenceless.

Not sure why would anyone want to create this, let alone use it since it would affect us all. But, there you have it. You can release any virus you want to be targeted at anything. But the problem with viruses is that you can’t really control them, can you? This makes you wonder about Coronavirus…

Gee, I wonder what that could be? Yup, you guessed it. It’s a rifle that fires special bullets. They steer themselves in the chosen direction to hit a specific target, even if it’s moving.

But you might be able to survive all of this by hiding in a professional shelter, so maybe you’d want to check that out as well. And now we’ll give you those couple of promised honourable mentions for the old school guys – the once who like to actually hold their weapon.

Also See : What to Get My Wife for Our Anniversary?

What will be the next weapon of mass destruction?

The Department of Homeland Security works every day to prevent terrorists and other threat actors from using these weapons to harm Americans. A weapon of mass destruction is a nuclear, radiological, chemical, biological, or other device that is intended to harm a large number of people. weapons have not been used in modern war since the Japanese spread plague-infected lice in areas of China during World War II.

Stay Connected
52,667FansLike
5,669FollowersFollow
829FollowersFollow
Previous articleBest Weapons To Use For Self-Defence In a Post-Apocalyptic World (Top 10) Part 2
Next articleCorona Virus VS The Black Plague