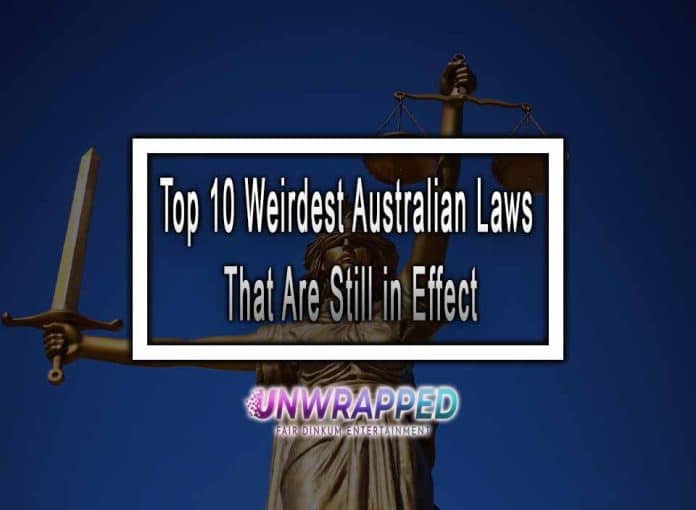 Every country is governed by a set of rules and regulations that the citizens of the country are bound to follow. These rules and regulations are called laws. A country needs laws to ensure the smooth functioning of day to day activities. There is criminal law, international law, corporate law, labour law, property law, constitutional law and various other types of laws that will crop up in your life one way or the other. However, some laws are so unique that you can’t make the head or tail of them. These laws, though exist but are not widely known and thus the chances of you getting arrested for breaking them are very thin.

Just like any other country, Australia has laws of its own to guide and protect its citizens. Australian laws follow the same mandate that all the citizens must abide by the set rules and regulations or suffer the consequences. But there are strange laws that are in effect even though there is absolutely no reason behind them. Some laws are so weird that you are bound to question the reason behind their existence. Some bizarre laws of Australia are it is illegal to dress up as Batman and Robin or in Queensland taxi cabs carry a bale of hay in the trunk, though there is no possibility of having a sound reason behind this law. Beware that if you walk on the right-hand side of the footpath you might get in trouble with the authorities. Thinking about cleaning your house, don’t switch on your vacuum on a weekend between 10 pm to 7 am because it is illegal. So, here are ten weird Australian laws that are going to make you laugh the next time you think about this country.

First on our list of bizarre laws of Australia is this. Apparently, in Victoria, you cannot wear hot pink hot pants after midday on a Sunday. There goes your plan to beat the heat while wearing a good colour. Just hope that the poor tourists visiting the country haven’t packed any hot pink hot pants for their journey or it will end badly for them. They should print this warning in hot pink on the travelling brochures.

Almost everyone in the world loves potatoes, but the weird Australian laws prohibit you to have more than 50 kg of potatoes at a time. Weird right? Just jot this down on your grocery list if you don’t want to end up in a police station trying to explain the reason why you had more than 50 kg of potatoes. And that’s not the weirdest part, the police actually can stop any vehicle that they believe is carrying more than the legal potato amount and they can charge a penalty. So, in a nutshell, eating too many potatoes can cost you. Heavily.

Another one in our list of strange laws that are in effect is this masterpiece. Planning on going to the beach in Brighton Beach in Melbourne, you are in the need of a new swimsuit. To all those burkini sellers out there, this is a golden opportunity for you because of the bizarre laws of Australia, apparently, you need a swimsuit that covers you from the neck to the knee and while you are at it make sure you have your as covered. You don’t want a fun outing to turn into a police matter. Talk about modern times, right? Beaches have laws of their own. If you are planning a trip to Melbourne, please buy a new bikini that fits their description.

4.NO DRINKING AT A PUB

Why does one go to a pub? To have a good time with their mates but Australian laws want you to have fun with responsibility. It is illegal to get drunk at a pub. The security is within the rights of the law to kick you out of the establishment if they think that you are drunk, if you don’t cooperate then you just earned yourself a night in a cell because they can call the police. So, drink safely and though it is not a part of this law, don’t drink and drive.

5. KIDS CAN SMOKE BUT NOT BUY CIGARETTES AND ALCOHOL

The Bizarre laws of Australia forget to cover one basic point. The Australian law bans kids below the age of 18 years to buy cigarettes and alcohol however, the funny part is that this law doesn’t say anything about smoking or drinking. So, the parents must beware of such strange laws that are in effect and should be sure of locking the liquor cabinet when they leave the house. It is not against the law to drink alcohol so it is up to you to stop your kids from doing such rash things.

If you get electrocuted to death then you will have to pay fines to the government. Apparently, according to Australian laws, it is illegal to touch electric wires which can lead to your death. So, if you don’t want to pay a fine of up to $200 then please keep a safe distance from electrical wires and don’t die because of them. Definitely one of the weirdest Australian laws.

Just another story of strange laws that are in effect in Australia. Ironically, if you are going to the Gold Coast, your bikini must not exceed six inches of clothing. If Brighton beach doesn’t sound like your kind of place then change the destination and enjoy. Trust Australia to have two different laws about the same issue. Beware of the fashion police who’ll be there to measure the amount of clothing covering your skin and if all this haggle is too much for you why not stay in, have a good cup of coffee and read a book and don’t worry about the bizarre laws of Australia.

Fortune telling and tarot reading are illegal in this country because the Australian laws believe in making one’s fortune. If you plan on going out and having your palm read or fortune told, think twice because the tarot card reader won’t tell you that your fortune might lead you to legal troubles. Be an ideal citizen and keep away from witchcraft and magic.

9. DON’T CHANGE THE BULB IF YOU AREN’T QUALIFIED

10. DON’T BE A WEDDING CRASHER

Yup, it is illegal by the law to be an uninvited guest to witness someone’s holy matrimony. You can get a fine of up to $10,000 which is a huge amount to put at stake for some free food and good music. It is illegal to crash a funeral. And though it is rightful because you have to know someone to be a part of their happiness or sorrow, the fine of $10,000 is a bit much. The strange laws that are in effect are sure making the Australian police very happy.

These are but a few of the weird laws that Australia has. Most of them are not public knowledge but one should be aware of them in case they break a law they didn’t even know about. One does question the reason behind the existence of such laws and the goal they accomplish. Every country has some weird laws that will leave you in a fit of laughter when you know about them. Australian citizens are bound to abide by Australian laws as the citizens of any country are. However, these laws are not well-known enough that sometimes the citizen might not even know the reason why they got in trouble with the authorities.

What are some crazy laws that still exist?

Also See: Why Have a Wedding in Australia?

Stay Connected
41,936FansLike
5,684FollowersFollow
867FollowersFollow
Previous article
Australian Passport your Gateway to the World
Next article
Top 10 Things You Will Love About Australia in 2023

Digital Nomad in Australia: 10 Great Places to Live and Work...

How to choose a bookmaker for sports betting