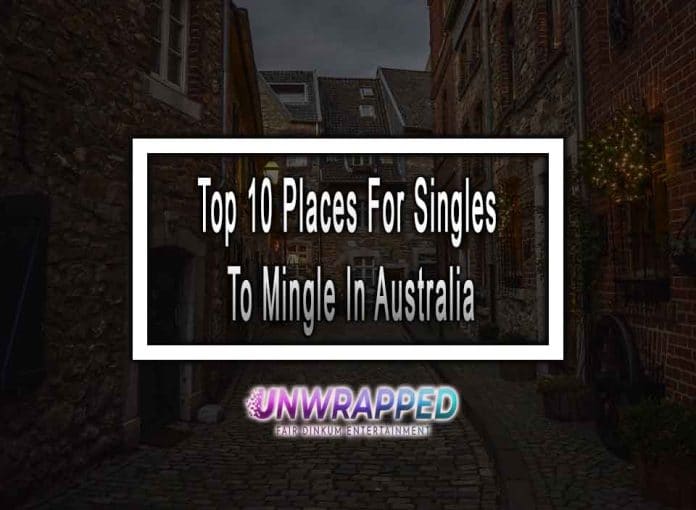 Ten Great Spots for Singles to Meet in Australia

Are you tired of being single and ready to get your groove on without any idea where to start hanging out, we have got you covered? We will point you in the right direction to the top places for singles to mingle in Australia.

A consensus showed that close to 50% of the residents of Coffs Harbour are single with a male ratio of 47.5% and a female ratio of 52.5%. That is close enough to balance and you are certain that there is enough of both sexes going around. Other reasons why Coffs Harbour attracts singles include low rentals and high salaries giving you more money to spend on frivolity and fun. A great place to hang out is the Coffs Hotel in the CBD with an outstanding atmosphere and is open every night with live music and loads of singles.

In Newcastle, there is plenty of fish in the sea literally and figuratively with 48.4% of the residents single. We don’t know why there is such an abundance of pubs and clubs in Newcastle as it appears as if it is meant for everyone to have their bar suitable to their taste. From Bar Petite to the Wickham Boatshed, Finnegan’s Hotel, Coal & Cedar, Basement on Market Street, Queens Wharf Hotel and many more, you can frequent any place as they have a great atmosphere, live music on most nights, stay open until late and always plenty of single patrons.

43% of all residents in Hobart are single which is great news as it also has an abundance of top places to mingle with singles. From the Telegraph Hotel to the Republic Bar & Café, Grape Food & Wine Bar, The Brick Factory, Franklin Bar & Restaurant, Post Street Social, Society Salamanca and many more, you will never have a boring moment considering the number of singles in Hobart.

In Queensland, the best place to meet singles is Cairns with an almost equal ratio of male and female singles. With 42.8% single, 50% are men while 49.7% are women. You are in a beautiful, tropical and romantic city with heaps of singles and plenty of hotspots. Try any one of these; the Pier Bar, Salt House, Three Wolves, Cock & Bull, Ochre Restaurant, Q Sports bar, The Attic Lounge Bar or the Boatshed to name a few.

if you are single you can mingle to your heart’s content on the Gold Coast. Skip the tourists and Surfer’s Paradise and go to one of the neighbourhoods nearby like Mermaid Beach or Broadbeach. These beaches offer a diverse variety of spots that suits any taste ranging from cocktail bars to dancing the night away to house music. While the pulsing nightlife is amazing, it also has picturesque beaches.

Melbourne is known for its great single squad but where do you go when you are ready to mingle with other singles? In South Yarra, you should check out the Emerson as its levels include a cocktail lounge, a club and rooftop bar and a popular spot for singles. In Brunswick, the Howler is the place to hang out with live bands as well as a great bar. Get rid of your inhibitions at Yah Yahs in Fitzroy which stays open until 4 am with continuous dance parties. A new kid on the block in Fitzroy is the Glamorama which stays open until 5 am on weekends and 3 am during the week with pumping music and a late-night kitchen.

At the Watsons Bay Boutique Hotel local singles love to mingle amidst glorious sweeping views of the city and harbour near Vaucluse. You don’t want to be anywhere else on a sun-drenched afternoon in Sydney and the Beach Club is always in full swing until the morning hours. Aside from a great party spot can you grab one of Sydney’s greatest seafood menus too and maybe share a platter with a new partner!

If you live in Surry Hills or not, then drive there as this is a serious place where you will find an abundance of mingling singles of all kinds that broaden your line-up significantly. Single after-work punters kick back with happy hour drinks, while there is an upstairs band room open till late as well as a leafy courtyard with great seating spaces.

If you are sophisticated and looking for a like-minded professional with high-class sophistication, look no further than the Zeta Bar in Sydney. This upper-class bar only serves the best cocktails in Australia, has epic views of the city, the drinks are world-class, the terrace is more than magnificent and anyone hanging out there is ready to mingle in this upscale bar.

When you are single in Adelaide, we have just the places for you to get your mingling on a roll. One of our favourites is the Rocket Bar & Rooftop which is an excellent place where all Adelaide’s single know they might just be in for a surprise to meet a new partner. Not scaly but an upper class with a relaxed atmosphere. At Casablanca, the busy restaurant turns into a lively night bar that stays open till late with lively music. The Hennessy Rooftop Bar is another one that belongs at the top of the list and is one of the best bars for singles in Adelaide.

May our list of singles places allow you to meet a new partner or at the least a couple of new friendships when romance isn’t what you are looking for. Good luck and happy mingling!

Where are the most single girls in Australia?

He says a 2001 study found the inner-city suburb of Pyrmont had Sydney’s highest ratio of single men to single women, while the highest proportion of single women was found in Balmain.

Also See: Top 10 Periods of the Year to Visit Australia

Stay Connected
52,651FansLike
5,673FollowersFollow
829FollowersFollow
Previous article10 Great Gay-Friendly Must-See Locations Go Downunder in Australia
Next articleWhy Australia Is One Of The Safest Countries In The World To Visit