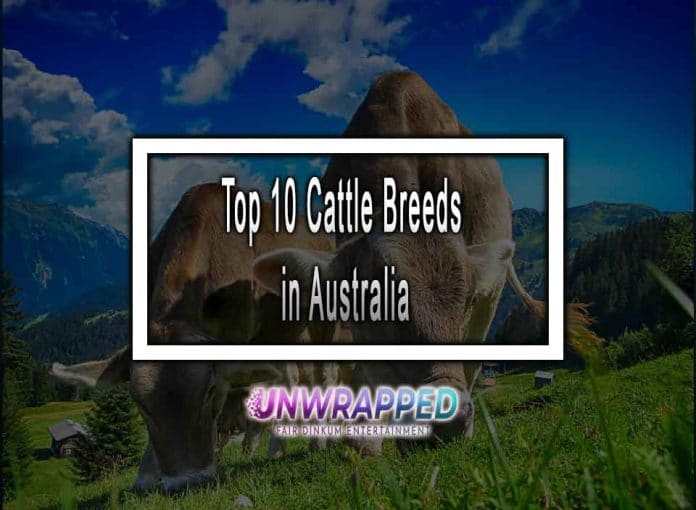 While you might not think about where your steak comes from or your milk and dairy products, it is always good you know or rather interesting what goes on behind the scenes. Are you consuming imported meat and dairy or is it local? What is interesting to know is that most Australian cattle breeds are not quite “original” but a result of crossbreeding.

We Look At The Top 10 Cattle Breeds in Australia

The Murray Grey was developed on the border of the Victorian/New South Wales border in the upper Murray River Valley. It is an Australian polled beef that has evolved into a very versatile breed that produces excellent quality carcasses and does well in any environment. Source: Creative Commons Attribution 3.0 Unported
The Murray Grey has a good walking ability, has a sound structure and has a moderate size. A bull weighs between 817 and 1,135 kilograms, while the cows weigh approximately 500 to 700 kilograms. This medium-framed cow breed does not have to consume large amounts of forage to maintain a good body condition.
The cows have good dark udders and teats and are heavy milk producers. Their colour ranges from dark grey to chocolate or very light silver but the majority of the Murray Grey is a silvery colour.

Several cattlemen crossed a British breed, the Beef Shorthorn and Brahman in the early 1900s in North Queensland and developed a tropical beef cattle breed called the Droughtmaster. This specific breed was the answer to a cattle breed that does well in the Australian tropics, had great tick resistance and can have high fertility and great weight gains irrespective of pastures and environment. Source:  Creative Commons Attribution 3.0 Unported
The Droughtmaster was the answer and it is a medium to large cattle breed with low nutritional requirements and good walking abilities and a good ability to retain their good condition while they keep breeding. They have short coats with a red colour even though their colour can vary from dark red and golden honey too.
The Droughtmaster’s red pigmentation helps to protect them from photosensitization sunburnt udders and cancer eyes. They can be horned or polled. They have extended dewlap and large ears. In feedlot and pasture, this breed shows great average weight gains.
Since the 1970s this breed’s semen, cattle and embryos have been exported to other countries like the Pacific Island, the Middle East, South America, Africa and Asia.

This Aussie-bred beef cattle breed was developed in the 1970s in Queensland to suit the environment. It was bred by combining the genetic characteristics of the Brahman and Murray Grey. This breed has between 25 and 755 Murry Grey genes and the rest comes from the Brahman.
The combination of intermixed breeds allows the breeders to select breeds suited to specific environmental and regional conditions. The Greyman has a sleek coat ranging from dark grey to silver.
The Greyman breed has excellent mothering abilities, naturally tick resistant and heat and drought resistant while efficient feeders.

In 1954 the Industrial Research and Commonwealth Scientific Organisation developed the Belmont Red. It was bred as an Australian Tropics breed that would be used to improve the Bos indicus cattle’s fertility rate.
Several Bos Taurus breeds including the Hereford Shorthorn and the Africander were used in the development of the Belmont Red. The breeders wanted cattle that show great tick resistance and a placid temperament while using the pastures and environment in a manner that would deliver excellent weight gains.
Belmont is in Western Australia and this breed does excellent as a well-adapted breed that requires very little to zero dipping and the cows do exceptionally well in droughts.

Read More: Top 10 Of the Best Rose Wines to Buy in Australia

The Australian Charbray is the result of inbreeding between the Brahman and the Charolais. The Charbray is a large cattle breed with heavily muscled quarters and loin. They do exceptionally well in areas with hot and humid conditions with the Brahman infused breeding.
The Charbray is a light cream to red coloured animal and their calves show excellent growth rates. When a calf is born the colour is tan but within a few weeks, they lighten to a creamy white.
The Australian Charbray cow matures early and within 14 months ready for breeding and when close to two years ready for rebreeding and its milk production is excellent. The bull shows early testicular development and is also fertile at a young age.

Read More: Top 10 Souvenirs to Remind you of your Trip to Sydney

Australian breeders developed the Lowline which is a polled small beef cattle from black Aberdeen Angus cattle. Many people are under the impression that they are injected with a dwarf gene, but that is not true. Due to their small size, they are suitable pets, especially in the United States. The Trangie Agricultural Research Centre developed this breed in 1974. Source:  Creative Commons Attribution-Share Alike 3.0 Unported

A crossbreeding between the Angus and Brahman during the 1950s resulted in the Brangus which was done by breeders in the tropical coastal areas of Queensland. The United States was first to develop this breed but independently bred by Aussies as the Australian Brangus.
Compared to all the other cattle breeds the Brangus showed the highest tolerance for heat and ticks. It is a cattle source that is widely used throughout Australia for meat and its meat is exported a well to countries like America and Japan. Source:  Creative Commons Attribution-Share Alike 4.0 International
Its genetic makeup is 5/8 Angus and 3/8 Brahman and even though they are predominantly sleek black it is not unusual to see them in red colour. They have a low eye cancer rate and are good foragers and walkers and thrive in a range of conditions.

An Australian Bradford may be polled or horned with their genetic background and 50% Brahman and 50% Hereford. This breed was developed between 1946 and 1952 by breeders in Queensland that looked for a breed that is both heat tolerant and tick tolerant. Its first origin was north of Rockhampton in Edengarry by the Rea Brothers. Source:  Creative Commons Attribution-Share Alike 3.0 Unported
This breed has loose skin, a small hump and a short coat of white and red and their colour pattern resembles that of the Hereford breed. You will find this breed predominantly in Queensland and New South Wales. The semen of the Bradford has been exported to other countries too like South Africa and South America. Live cattle have been exported to Thailand as well as Indonesia.

The Adaptor was another breed that was developed for tick and heat intolerance in Rockhampton at the Belmont Research Station. You will find the Adaptaur predominantly in the northern tropical regions of Australia.
They mature early and have a medium size with good resistance to internal parasites. It has a dark red short coat and is one of the breeds n Australia with the highest tick intolerance recorded to date. The Adaptor is capable of excellent crossbreeding with an incredibly fast-growing F1 progeny and is also one of the most fertile cattle breeds in the country.
It has the favourable carcase quality of another breed, the Bos Taurus while they are 10% more efficient compared to Brahmans.

Read More: What will be the GDP of Australia in 2020

The Australian Friesian Sahiwal was developed in 1961 by the Department of Agriculture. It is a crossbreed between a Bos indicus and a Holstein Friesian, this cross-bred was then crossed again with a Sahiwal bull which produced what we now call an Australian Friesian Sahiwal.
The aim behind the breeding was to produce a dairy cow that does well in tropical conditions since the original did not produce adequate milk and could not conceive in the hot conditions in Australia.
It was a hugely successful breeding program since the Friesian Sahiwal yields 80% more milk than other Friesians and the conception rate is high too. The breeding ratio of 50/50 is what delivered this breed and throughout the years this number has been maintained. Since this is a third-generation breeding program, the Australian Friesian Sahiwal is now listed as a purebred.
Some of this breed are red and black while others might be black and white, but they are a very fertile breed, copes exceptionally well with tropical conditions, shows high tolerance for tropical parasites and ticks and also yield plenty of milk. The milk is also of high quality with high protein and fat content.

Crossbreeding in Australia in recent years introduced cattle breeds with characteristics to make beef and dairy cattle more disease and pest resistant. It also does exceptionally well in the heat and tropical regions in Australia.

What is the most popular type of cattle?

What breed of livestock is most worthwhile? Angus: this is the most famous breed of pork farm animals. Their meat fine is incredible and they provide 50 per cent of their weight inside the meat. Highland farm animals: though they may be now not as famous as they once were, they’re nevertheless in demand by people who know love their meat.

Dates: Benefits Of This Energetic Fruit Rich In Fiber And With A Satiating Effect