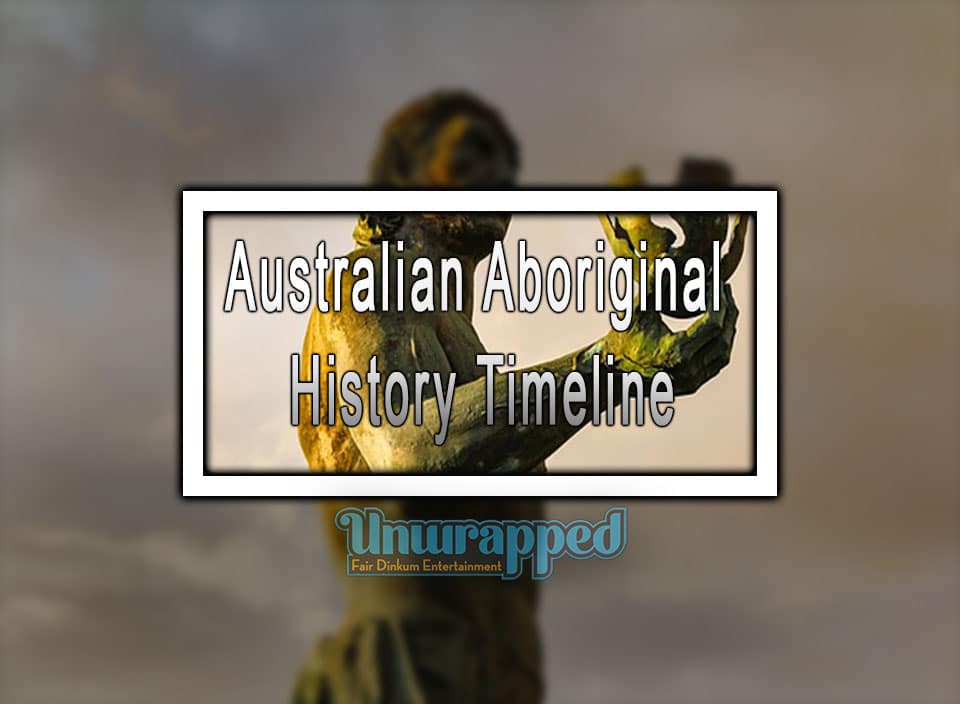 The history of Aboriginals in Australia goes way back in time. They were the first people who came and settled in the country backdating sometime a few hundred centuries ago.

And so, to give you a better overview and understanding of the timeline of Australian Aboriginals’ existence in “the Land Down Under,” we listed it below in chronological sequence.

The Timeline of Australian Aboriginals

Here’s a recorded timeline of the Aboriginals in Australia from the discovery of their architectural remains, such as campsites, cave and stone’s carvings, pigments, and tools used in their daily living.

In 2017, archaeological researchers found pigments and tools in the Northern Arnhem Land at Madjedbeb in the Mirrarr Country. Upon careful examination, they revealed that these remains are at least sixty-five thousand (65,000) years old.

The timestamp is way much earlier than the previous calculations of the “First Nations” people’s settlement in Australia.

According to the “Australian Museum,” the pigments and tools they discovered are the earliest proof or evidence of the Aboriginals’ day to day activities and cultures, such as the usage of edge-ground hatchets, seed grinding, and pigment-processing.

At the Cuddie Springs’ archaeological site in New South Wales, the researchers found remnants of grinding stones’ fragments that came from at least 300 centuries ago or 30,000 years ago.

These fragments showed that the Aboriginals used them to grind ochre, pigments, and seeds. With that said, theories emerged that the Australian Aboriginals might be the first people in the world who pounded or pulverized seeds to make flour and bake bread.

In another research, archaeologists discovered engraves on the rocks, estimated to exist about 25,000 years ago, of what is now the “Ku-ring-gai Chase National Park.”

Engraved in those rocks are images of people, things, and objects, such as their ancestral beings, animals, astronomical constellations, humans, tools, and weapons that provide us the ideas on the beliefs of the Aboriginals and their daily living.

On the other hand, footprints of a young child, estimated to come from sometimes two hundred centuries ago, were found by another group of archaeologists.

Within these centuries ago, backed artefacts that appeared to have multiple functions and among those are for scarification, spear points, and wood-working. Apart from that, microliths have been used possibly in creating jewelry.

Archaeological records also found ground-edged axes in south-eastern Australian, which may come from around 4,500 years ago. These hatchets helped in cutting things, like in building shelters, hunting, or wood-cutting.

Sometime in the 1100s, another remains from the Australian Aboriginals’ culture came about. The archaeologists found fish hooks somewhere in the coasts of eastern Australian, and later, traditional fishing of the Aboriginal women surfaced.

While in the 1500s, the journey of Maccassan trepangs’ collectors or fishers to northern Australia got recorded in the Dutch documents. According to their records, Maccassan sails in 1588 using praus to the north-eastern coast part of the Northern Territory.

During this timeline, blood feud came about between the Aboriginals and the white settlers, which resulted in a massive massacre.

The tribe of Southern Arrernte gathered together from different quarters and forcibly made their way to Hermannsburg, which is 120-km West of Alice Springs.

During this time, there were often special areas arranged for the Aboriginals to move where they got forced to dwell, controlled by either the government or the church. This movement is to avoid or “protect,” so they said, the Aboriginals from the devastating realities of colonialism.

Among the reasons was due to the belief that their race would die, according to the 19th-century teachings of social Darwinists

In both cases, the Aboriginals had been left without a choice but forced to suffer immense strictness and restrictions. They had to depend on food rations to survive. Moreover, several of the reserves got shut down, and then, again, the lands got taken away from them and given to the non-Aboriginals for farming after World War I.

Due to what happened, the Aboriginals lived in camps on the towns’ borders where they suffered terrible deprivation and poverty.

At this time, Aboriginals have to find ways to adapt to the problem that comes in with living in illness and poverty. By saying so, children got taken away from their parents and put in places where they had to undergo training to become servants or labourers.

The policy of assimilation became an official government policy, whereby all Aboriginals, full or mixed blood, will have to live similarly like white Australians, as they deemed it the best way to solve the problem.

Due to what seems like severe or unfair treatment of the Aboriginals, the modern land rights movement became a reality. The first national organisation of Indigenous people in Australia came about. The launching of the “Federal Council for the Advancement of Aborigines and Torres Strait Islanders (FCAATSI)” aimed to claim the long-deprived justice of the Aboriginals.

Yet, in 1963, the Yolngu people of the Yirrkala community of the north-east part of the Arnhem Land had to face a tragic fate as an enormous bauxite mine took over their traditional lands.

The Yolngu people sent a “bark petition,” which is now a permanent display at the “Parliament House.” However, the dispossession of the Aboriginal lands continues that led to a court case, which ended unfavourably for the Yolngu people.

Justice Blackburn ruled out that Yolngu has no right to prevent mining on their lands because the country was legally an empty land, referred to as “Terra Nullius.”

The constitutional amendment in recognising Aboriginal people as Australian citizens became a mandate. With that, Aboriginals have the same voting rights.

The result of the Yolngu people’s petition against the bauxite mine led to the establishment of the “Aboriginal Land Rights Commission” or also notably referred to as the “Woodward Commission.”

In December of 1976, the federal parliament issued passed on the “Aboriginal Land Rights” in the Northern Territory act. This legislation was the first law that enabled the Aboriginals or Indigenous people of Australia to claim their rights to their lands for the country where their traditional ownership gets proven.

The “Minister for Aboriginal Affairs,” Robert Tickner, made an appeal to protect the sites of the Aboriginal women near Alice Springs against the threatening dam proposal created by the Northern Territory Government.

In December of 1993, the Federal Government passed the “Native Title Act” in response to the “Mabo Case.”

“Eddie Mabo and Others” v. “The State of Queensland” or better known as the “Mabo Case” was a High Court’s decision that discovered that the native land title of the Aboriginals was still in existence, in contrast to what the previous record said that the British destroyed their title, and that the country of Australia is not an empty land, which Justice Blackburn previously declared in Yolngu people’s “bark petition.”

In 1994, the native title system that includes establishments of a national land fund got set up, covered by the “Native Title Act” in 1993.

Acting as the mediator between Australia’s Indigenous communities and the Museum on issues concerning the cultural heritage management, the Anthropology department created the “Aboriginal Heritage Unit.”

While in 1997, the exhibit entitled “Indigenous Australians: Australia’s first peoples” commenced. The event displayed 600 Australian Museum’s collections and life-size reconstructions, among many others.

In 2002, the Australian Museum’s Aboriginal Heritage Unit received a grant from the Commonwealth and State Governments for their repatriation program entitled the “Return of Indigenous Cultural Property.”

The “Australian Museum” continues to establish and widen new programs and plans to promote the cultural heritage of the Indigenous Australians, the Aboriginals, and the Torres Strait Islander people.

And in 2017, a senior Gadigal man named Uncle Charles “Chicka” Madden made two shields called “Gadi” for another exhibition that’s going to be held at the “Australian Museum.

It was in 2018 that the Museum displayed the “Gadi” shields.

Australia Aboriginals win the right from the High Court to claim ownership of the lands due to colonial land loss.

The “Land Down Under” welcomed the New Year and their national day with a devastating bushfire and a protest by the Aboriginals.

They seek to demolish the celebration of “Australia Day,” which they often referred to as the “Invasion Day,” the day the British colonised their traditional lands.

According to them, the latter is more suitable than calling it the country’s national day because as Aboriginals who have experienced tremendous dispossessions of their rights as the first people in the country.

Lastly, the tireless leader and advocate of Australian Aboriginal rights, John Ah Kit, sadly passed away at the age of 69 years old this month. With the sad news, Jawoyn leader’s family and Northern Territory parliament’s first Aboriginal minister said that apart from mourning his death, they should focus on celebrating his life.

Myths and Legends About Australian Aboriginals

When did the Aboriginal Australians start?

Humans are thought to have migrated to Northern Australia from Asia using primitive boats. A current theory holds that those early migrants themselves came out of Africa about 70,000 years ago, which would make Aboriginal Australians the oldest population of humans living outside Africa.

Why Have a Wedding in Australia

Why I support Donald Trump