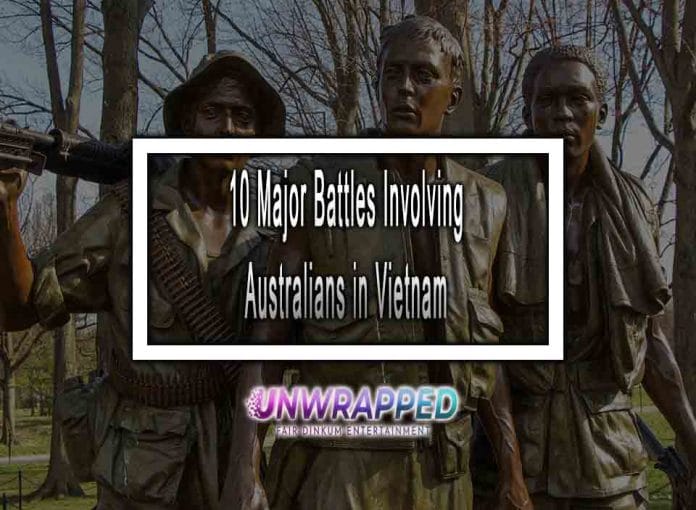 Military history of Australia during the Vietnam War

A conflict in a small country called Vietnam was one of the most significant events of the decade. The Vietnam War began years earlier when the country got divided over how the governments should manage it. People who believed in communism led North Vietnam. It is a system in which citizens labor for the government and rely on it to provide for them. Many people in South Vietnam, on the other hand, did not want to live in such conditions.

The battles involving the Australians in Vietnam have one positive to come out of the aftermath of this war. Tens of thousands of Vietnamese people fled here to escape the North’s rule and got taken in as refugees. For many who served in this battle, memories of the conflict are still raw. Learn about Australia’s involvement in the Vietnam War.

Long Tan gets regarded as one of the significant battles fought by Australian forces during the Vietnam War. The Battle of Long Tan got fought on August 18, 1966, in Phuoc Tuy Province, South Vietnam, between Viet Cong and North Vietnamese forces from the Viet Cong 275th Regiment. They got reinforced by at least one North Vietnamese Battalion, D445 Provincial Mobile Battalion, and Australian forces from D Company, 6th Battalion, and Royal Australian Regiment during the Vietnam War or 6 RAR.

The battle began late on August 18, 1966, late afternoon, and lasted three and a half hours in the mud and rain. Around 2 a.m., the allies directed heavy fire at the Nui Dat base on August 17. The enemy first got encountered at the rubber plantation around 3. At 2:45 a.m., the battle’s final eight rounds got fired on August 19, 1966.

The Battle of Hat Dich (December 3, 1968–February 19, 1969) was a series of armed battles conducted between an allied contingent, comprising the 1st Australian Task Force, or 1 ATF, and the People’s Army of Vietnam, or PAVN, and the Viet Cong, or VC.

The Australians had initiated most contacts during the operation, in contrast to the American trend of the VC initiating over two-thirds of the actions. On February 19, 1969, Operation Goodwood ended after 78 days. FSB Julia was closed in preparation for impending operations, and HQ 1 ATF moved to FSB Kerry. There were 21 Australians killed and 91 wounded, one dead and six injured in New Zealand, 31 killed and 81 wounded in South Vietnam, and seven wounded in the United States.

During 274 distinct contacts, the PAVN/VC suffered at least 245 deaths, 39 possible deaths, 45 wounded, and 17 captured. Over 280 rocket-propelled grenades, 70 antipersonnel mines, 490 grenades, and 450 pounds of explosives were arrested, with nearly 2,000 bunkers discovered and many destroyed.

1968 is a turning point in the Vietnam War. The Tet Offensive had been a tactical disaster for the PAVN and Vietnam Cong, resulting in over 45,000 casualties against the Army of the Republic of Vietnam (ARVN) and 6,000 allied casualties. The Australians considered the operation a success, as VC activity in 1 ATF’s area of operations dramatically decreased as the VC got forced to quit their permanent strongholds in the Hat Dich, delaying their preparations for impending offensive operations.

On November 8, 1965, the Battle of Gang Toi got fought between Australian troops and the Viet Cong during the Vietnam War. A Company, 1st Battalion, Royal Australian Regiment or 1 RAR hit a Viet Cong bunker system defended by Company 238 in the Gang Toi Hills, in northern Bien Hoa Province, in one of the first encounters between the two troops during the conflict.

Despite eyewitness reports that Gillson and Parker got killed, six soldiers got injured, and two were missing. These six Australians were the first two to go missing in Vietnam. A company was eager to return to Gang Toi and seize both of them. Over 40 years later, the two missing Australian troops were discovered and returned to Australia for burial.

From May 12 to June 6, 1968, the Fight of Coral-Balmoral was Australia’s most incredible, longest, and bloodiest battle, involving more Australian and enemy personnel and resulting in more losses than any previous battle in Vietnam War.

Coral and Balmoral were isolated gun emplacements with a perimeter of infantry to protect them. Neil’s company was part of the Battalion assigned to set up Coral, but the mission got doomed.

There were 267 PAVN/VC dead in the AO Surfers, 60 possibly killed, seven injured, and 11 taken, while Australia lost 25 killed and 99 wounded. Five soldiers from New Zealand and five soldiers from the United States were also hurt. It was the first time the Australians engaged the PAVN in regimental strength. They fought their most incredible, most dangerous, and the most protracted struggle of the war by operating in-depth in a series of encounters analogous to conventional warfare.

During the Vietnam War, the Viet Cong, or VC, and the People’s Army of Vietnam, or PAVN, attacked the Nam ông CIDG camp to overrun it on July 5–6, 1964. Nam Dong is 32 miles west of Da Nang in a valley near the Laotian border; it got operated by South Vietnamese personnel with American and Australian advisers and was difficult for local Vietcong militants.

At this contact, Warrant Officer Kevin Conway of the Australian Army Training Team (Vietnam) AATTV got cited by his commander, then Colonel Francis Philip (Ted) Serong, for the Victoria Cross, the highest heroism award for Australian service members.

During the battle, 57 South Vietnamese defenders, two Americans, an Australian military advisor, and at least 62 attackers got killed.

On November 5, 1965, US and Australian forces launched Operation HUMP, a search-and-destroy mission during the Vietnam War. Operation HUMP, which involved the US 1st Battalion, 503rd Infantry Regiment, 173rd Airborne Brigade, and the 1st Battalion, Royal Australian Regiment, was named because it marked the halfway point of a 12-month tour of duty for individuals. Therefore, the paratroopers passed over the Hump to the downhill side of their time.

During those first six months, there had been a few close encounters with the Vietcong, but they were usually brief encounters that concluded with the enemy fleeing. For the 173rd and the US Army, Operation HUMP altered everything.

The combat resulted in heavy fatalities on both sides, with 48 paratroopers killed, many more injured, and 403 PLAF men killed.

The 173rd Airborne Brigade launched a vigorous assault into the Mekong Delta’s Plain of Reeds on January 1, 1966.

The mission’s target, the Viet Cong 267th Main Force Battalion, was quickly identified, and a three-day fight ensued. They broke into a Viet Cong stronghold and drove the enemy out of honeycomb shelters carved into the ground along canals.

During January 2–6, Australians from 1 RAR also engaged in significant patrolling action. They had sporadic contact with the enemy in their zone and killed two VCs. They did, however, discover an ammunition stash and several enormous rice caches. On January 5, a patrol in the neighborhood of Hoa Khanh made contact with a VC platoon, but the enemy broke the engagement and retreated. They discovered the 506th Battalion’s abandoned headquarters and recovered weaponry, ammunition, maps, and personnel rosters.

According to official sources, the 173rd Airborne Brigade killed roughly 400 VC by body count, and another 200 were estimated dead, while US fatalities were 49 dead and 83 wounded. However, Williamson’s figure of 400 turned out to be a guess made under duress by the Military Assistance Command, Vietnam headquarters, in the early aftermath of the combat. Later estimates put the number at 700, although such estimates are also questionable. Given that the VC force involved was the 271st’s 3rd Battalion, a body count of 700 meant that the 1/503rd killed twice as many VCs as were present during the engagement.

During the Vietnam War, the Battle of Sui Chau Pha (August 6, 1967) got fought between Australian and Vietnamese troops. During Operation Ballarat, an Australian search and destroy operation, the combat took place in the eastern Hat Dch area, northwest of Ni t in Phc Tuy province.

Between 4 and 16 August, operation Ballarat was intended as a battalion-sized search and destroy operation in the lion area of operations northwest of Nui Dat. The Commanding Officer’s plan called for companies to walk into the room overtly, preserving the element of surprise far more than if insertion were to be done by helicopter.

Five Australians got murdered, one died from wounds, and 20 others were injured.

Meanwhile, it was difficult to determine the number of Viet Cng casualties since the communists had evacuated most of them from the battlefield, as they had done in previous fights. A second check of the area by the Australians yielded the discovery of five more dead Vietnamese. However, drag traces and substantial blood trails showed that they got severely injured, with probably another 33 killed or wounded in the encounter. Artillery and mortar fire and several airstrikes got reported to have resulted in another 200 casualties.

The Battle of Nui Le was the last major battle fought in South Vietnam by Australian and New Zealand forces. During Operation Ivanhoe, a fight took place in the former Phc Tuy Province between members of the People’s Army of Vietnam 33rd Regiment and the 4RAR/NZ Battalion’s B and D Companies.

In September 1971, Australia had been a part of the Vietnam War for more than nine years. Since the unpopular conflict dragged on, the Australians were preparing to leave Vietnam by reducing their forces like the Americans. It would take time and effort to withdraw, and it would not be simple.

While Operation Overlord had forced the enemy to retire in June, the Viet Cong and North Vietnamese Army forces were back in Phuoc Tuy Province in September, seeking to trap the Australians into a large-scale ambush to score a propaganda win. The Australians would have to rise to the occasion once more.

They were the final Australians to die in action in Vietnam, with 24 soldiers injured and five dead. The most formidable hostile force confronting the Australians was the 33 NVA Regiment.

The operation began on January 24, 1968, and ended on March 31, 1968. During the Vietnam War, Operation Coburg was a military operation led by Australia and New Zealand. During the more significant battle around Long Binh and Bien Hoa, the 1st Australian Task Force, or 1 ATF, faced severe fighting between the North Vietnamese People’s Army of Vietnam, PAVN, and Viet Cong VC forces.

The Australians successfully damaged communist lines of communication, limiting their freedom of maneuver to attack the Long Binh-Bien Hoa complex and successfully interdicting their withdrawal, resulting in high fatalities.

During the Tt New Year holiday, American and South Vietnamese intelligence assessments predicted a PAVN/VC offensive. Therefore Australians and New Zealanders were moved from their base in Phuoc Tuy Province to help defend the Long Binh–Bien Hoa complex north of Saigon. 1 ATF established fire support facilities at Trang Bom hamlet, astride the PAVN/VC lines of communication, anticipating that they would be attacked and destroyed.

Given the horrors of war, Australian diplomatic policy centers on avoiding armed conflict. The nation only engages in anti-terrorism campaigns and proxy wars with its allies. But now that China and the West jostle for influence and power, Australian politicians and military experts weigh Asia’s sensitive balance of power. Should war break out, Australia would have to decide which side it would support.