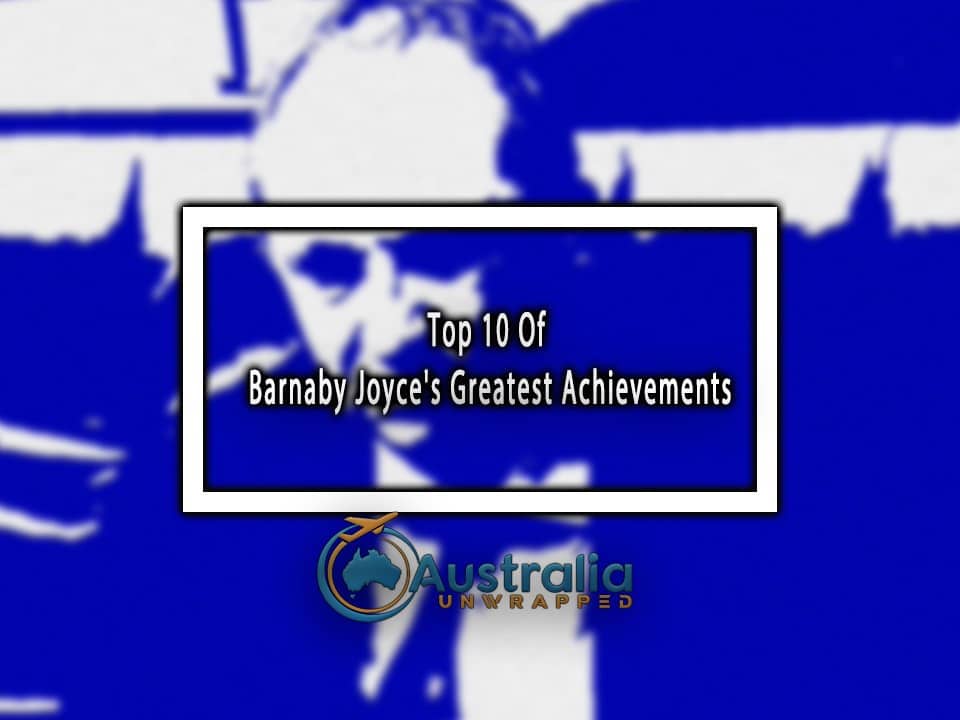 Barnaby Thomas Gerard Joyce happens to be an immensely popular face of Australia’s National party. He has been the heart and soul of the political party he chooses to identify with. His personality comprises multiple facets, and we have to dissect each one of them to know who Joyce actually is.

Joyce is one of the most discussed political figures in Australia in this day and age. He was successful in achieving this milestone through a lot of hard work. His voyage to date must be consisting of a mix of good and bad experiences as we can easily envisage. Here’s us trying to shed light upon the remarkable achievements he has bagged to date!

1. Joyce is an Alumnus of the University of New England

Joyce comes from a very humble family that used to reside in Tamworth, and the farming family had big dreams for their son. The young boy realized how important it was for him to achieve something in life, and hence, he went to the University of New England to open a new door to success. He learned financial administration at the respective university and emerged as a thriving financial accountant.

2. He Started Practising As An Accountant in St.George, Queensland

Before entering politics, he was into something that perfectly suited his academic pursuit. He had set up an accounting body in St. Georgia, Queensland, to accommodate people needing financial assistance. Right after completing his education from the University of New England, he started his own small-scale business, which he preferred to look after with meticulous attention.

3. Joyce Got Elected As a Senator After a Few Years in Politics

Joyce commenced his political career in 2004 when he got elected to the house of the senate. This was the starting point of his career, which led to many more aspirations. The National party of Australia gave him this breakthrough, and since then, he has been a stalwart who never dodged his party considering a better option. He still pledges to stick to the mother-ideology and make his party go places.

4. Joyce Started Leading the National Party in The Senate Within a Few Years Of Parliamentary Politics

Joyce had some hidden leadership skills in him, which got unfolded within a couple of years after he joined his mother-party, The National Party of Australia. He was elected to the house of the senate in 2004, and he became the leader of the senate for the Nationals in 2008. He attained a position conferring prestige within a brief period due to his extraordinary leadership expertise.

5. Joyce Switched To The House of Representatives and Won A Rural Seat from New England

Joyce has had the ability to persuade people to believe in what he thinks is right for the country. He tried his hand at the house of representatives, therefore. He chose an extremely rural constituency of New England to rise as a people’s person. It must not have been a great deal for him as he hails from a rural background; his parents were both farmers.

6. Joyce Embraced The Post Of Deputy Prime Minister of Australia

Joyce never thought of ceasing his accomplishments even for a sec. He always preferred to work hard and get better at what he does. He has been put on a pedestal he rightly deserved. He used to deputise Malcolm Turnball when he was serving as the premier of Australia. Little wonder, he is not from the Liberal party. Still, he managed to attain a reputable position under the hierarchy of Malcolm Turnball.

7. Joyce Served As The Minister of Agriculture Twice

Joyce has been part of the Liberals’ cabinet for a very long time. He had some managerial skills, and that’s why he was given a fair opportunity to serve the country under the seniority of Tony Abbott and later Malcolm Turnball. Since he showcased his administrative skills in his first tenure as the agriculture minister, he was once again chosen to take care of the same portfolio, and he most probably proved the decision right.

8. Joyce Served As The Minister Of Resources And Northern Australia In The Liberal Party’s Government

Joyce has had many short tenures as a minister in the Liberal party’s government. In 2017, he was selected to cater to the ministry of resources and Northern Australia. He was capable of seeing to the ministry for a rather short time, and he gave up on this job the very same year. He couldn’t linger on as the minister of resources for a reasonable period. He accepted the portfolio in 2007 and submitted it back in the same year.

9. Joyce Also Had A Short Term In The Ministry Of Infrastructure And Transport

After having served other departments of the government, Joyce was handed over with the ministry of infrastructure and transport. He was awarded this ministry under the seniority of Malcolm Turnball — who was later on succeeded by his colleague Scott Morrison.

It veils the curtain on trustworthy and cordial working relations between the Nationals and the Liberals. They may not be seeing eye to eye with one another on an ideological basis, but they can work in the same office for the sake of their mutual furtherance.

10. He Successfully Stormed Through The Ineligibility Crisis of 2016-17

It was one of the most challenging phases of his political career. This was the time when his credibility as a politician was tested. It was 2016 when he was announced ineligible to partake in national elections because of his deep-seated connection with New Zealand. Joyce’s grandfather had served in the army of New Zealand, and it was his father who came to Australia as an immigrant primarily to pursue higher education. Joyce was a dual-national, and hence he was declared unfit to participate in the elections.

Joyce was ousted from the parliament, and he had to give up on his seat. He made a comeback getting re-elected in the by-elections of New England. What’s praiseworthy about him is, he remained persistent throughout this phase and didn’t surrender to the harsh circumstances.