Do Female Cricketers Wear a Box? | The Logic Of It Will Leave You Dumbstruck!! 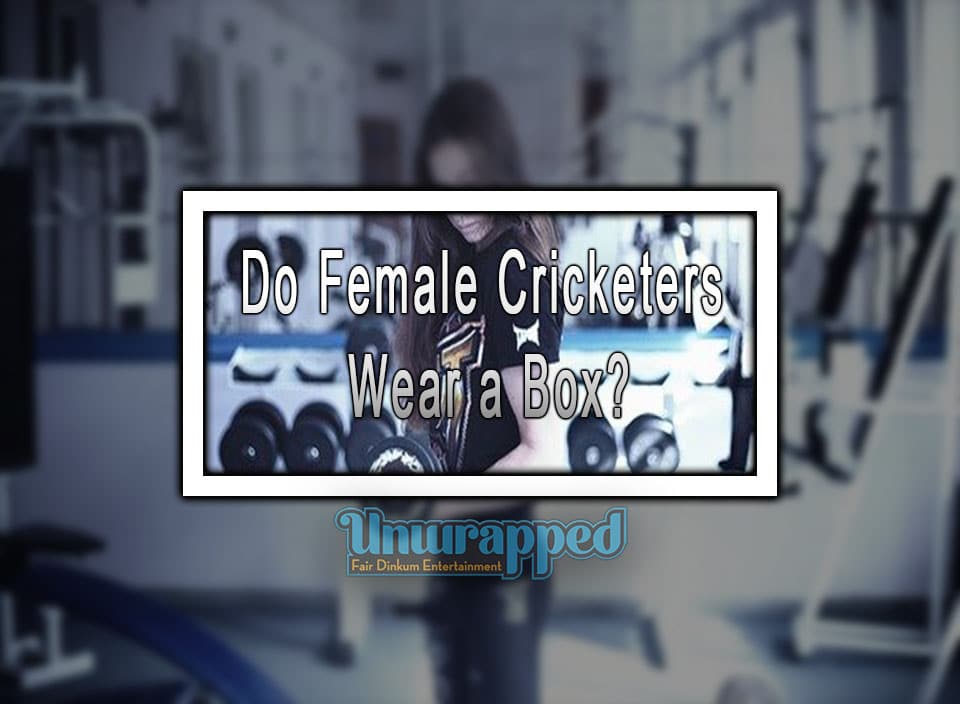 Cricket is a sport that involves utmost intensity when participating. For this reason, only highly skilled athletes and cricket enthusiasts excel at the sport. This is because only a few can withstand the possible injuries that come with the sport (as the injuries are very common). For one to take part in the sport, they should have protective gear to ensure their safety on the pitch.

When you hear about protective equipment in cricket, most people only count the head, knees, and hands protection. This is mainly because the protective gear is worn on the outside for everyone to see. However, other internal areas require utmost protection as the injuries on these areas can be fatal. The internal areas include the chest and the abdominal areas.

Most men don’t usually care much for the chest guard but women playing cricket do. The same might be said for the female abdominal guard for obvious reasons. However, female cricketers require the abdominal guard whenever they are playing to enhance their safety in the area. In this article, we are going to answer the question “do female cricketers wear a box” and how important it is to do so. But first…

What is a Box in Cricket?

Commonly referred to as the abdominal guard or L guard, a box is an equipment used to cover the pelvic area while playing cricket. The main aim of covering the genital area is to protect it from possible traumatic blows and basic injuries that occur while playing cricket. A box is designed to absorb the shockwave when the cricket ball hits the groin.

Any impact on the genital area for both males and females causes excruciating pain and possible abnormalities after some time. That is why the box is to be worn by male and female cricketers alike. It is worth noting that the box only absorbs most of the shock to save you from excruciating pain. You will, however, feel some kind of impact when the ball hits you. Only that it won’t hurt as much.

A cricket box is known by different names around the world, and especially in cricket-playing countries. These names include;

Having these names at your fingertips aids in purchasing the right equipment while shopping online. You get to choose a name from the above list if your first choice doesn’t provide the expected results.

Who Wears a Box in Cricket?

In female cricket, the batswomen, wicket-keepers, and close fielders wear a box because their positions demand them. A batswoman tries to hit the ball after being bowled in her direction by the opposing team. Unexpectedly, the bowled deliveries may bounce, leaving the batswoman in danger of being hit in the pelvic area. An abdominal guard, in this case, comes in handy to prevent or contain the impact caused by the ball to the region.

A wicket-keeper is the player on the catching side on the pitch and stands behind the stumps to carefully watch the batter. In this case, the wicketkeeper is always prepared to catch the ball as many will be thrown in her direction multiple times during the match. That said, a wicketkeeper should be equipped with a box to ensure safety in the event a wrongly aimed hard throw hits their pelvic region.

Close fielders are among players in the pitch who remain on the fielding side and not on the batting side. The chances of close fielders getting hit in this situation are quite high compared to the outfielders.  Mostly, the hit comes from the cricket bat striking at a fast speed, giving the close-fielder no time to escape the hit. Although it happens rarely, having an abdominal guard is essential to prevent such painful occurrences on the pitch.

When on a cricket pitch, there are always chances of one getting hit by either a cricket bat or ball. Both objects cause agonizing pain that won’t go away after some time. Therefore, if you find yourself in the pitch, remember to wear protective gear, especially in the abdominal area, to prevent the agony of being hit by a hard-thrown ball or speedy bat.

Is the Female Box Similar to The Men’s?

As mentioned, all cricketers, both male, and female, should protect themselves in the groin area. Although the impact of the hit on the groin is felt differently in comparison with male players, they both experience agonizing pain. To prevent this, female players also wear an abdominal guard for protecting the general genital region.

However, the female box slightly differs from the male box in terms of configuration. The female cricketers also require additional padding around the chest area to safeguard the chest and breasts from the impact of the ball or bat. With a female box, you are sure to prevent the injuries that may result while in the middle of the game.

While the male and female abdominal guards serve the protection purpose, they differ in structure, as mentioned above. The female box displays a flatter design because of the anatomical variances (compared to the male). Furthermore, the female box is cushioned to ensure maximum comfort when batting or participating. That said, you should purchase a box that is specially designed for female cricketers. This is because the abdominal guards aren’t meant for general use. If you are a male, then go for those that state male abdominal guards.

How to Wear a Female Box

For maximum protection when engaging in this intense cricket sport, you should know the correct way to put it on the box. When the abdominal guard is worn wrongly, chances are that it will not offer the desired protection and you are going to be uncomfortable throughout the game. These simple steps will help you wear your box as you should to ensure comfort and protection.

When wearing a box, first think of the kind of undergarments you have to put on. Initially, a cricket box was worn before wearing the underwear so that it is held tight in place. In this case, having tight-fitting underpants is highly recommended. You can also wear the abdominal guard on the outside, provided you have a fitting pair of underpants.

Strap it in Place

Most females wear the box outside their underwear for sanitation reasons. In this case, one requires jockstraps to hold the abdominal guard in place. However, with the advancing technology in the world, compression pants have emerged. The pants eliminate the use of a jockstrap.

Whether you are wearing the box inside or outside the undergarments, you are required to position it with the broader part at the top and the narrow at the bottom. This ensures the box covers the genital area for utmost protection.

Put on Your Playing Kit

This is the final step where after confirming the box is in the right position. Walk or jog around to ensure the box is comfortably positioned and you are good to go.

Protecting yourself when playing cricket is the first thing that any cricketer should put as a priority. That is why there are abdominal guards and other protective gears for every player. Having the right protective gear ensures proper protection for the possible injuries that occur on the pitch.

Who is the famous cricketer in Australia?

Sir Donald Bradman, the most famous Australian cricket player. And widely regarded as the greatest batsman in cricket history.