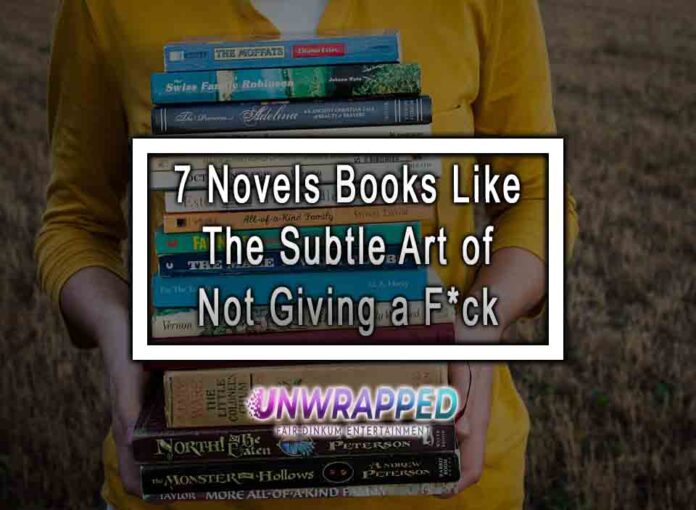 You can learn how to not give a F*ck about things that don’t matter by reading this book by Mark Manson. It is a quick read that includes anecdotes and exercises on paying closer attention to the important things in life.

One can learn several extremely important truths from this book, such as the fact that you generally give a fuck about little things when you’re dissatisfied or angry.

Manson makes the case that improving our lives depends less on our capacity to convert lemons into lemonade and more on developing a better stomach for lemons, a claim supported by academic data and well-timed poop humor.

Manson tells us to recognize and embrace our limitations because we are all flawed and limited—”not everyone can be amazing, there are winners and losers in society, and part of it is not fair or your fault.”

We can start to develop the courage, persistence, honesty, responsibility, curiosity, and forgiveness we seek once we embrace our fears, flaws, and doubts. We stop fleeing from and avoiding hard facts and instead start facing them head-on.

More Reading: 7 Books Like How to Win Friends & Influence People

The 7 books listed below are similar books that you should read.

Levitt and co-author Stephen J. Dubner demonstrate that economics is fundamentally the study of incentives—how people obtain the things they want or need, particularly when others have similar needs or wants. This is done through compelling storytelling and witty insight.

In Freakonomics, the authors sought to uncover the underbelly of everything how a crack group operates within. The reality with real estate brokers. Myths surrounding campaign money. The telltale signs of a dishonest teacher in the classroom. The KKK’s darkest secrets.

According to Freakonomics, morality symbolizes how we would like the world to function, whereas economics reflects how the world functions.

It’s true that after reading this book, readers will have learned enough jokes and riddles to endure a thousand cocktail parties. Freakonomics, though, can offer more than that. It will essentially change how we perceive the modern world.

The book Zero to One presents a new method for conducting business. Peter Thiel questions accepted knowledge regarding the formation and administration of businesses.

He demonstrates how advancement can be attained by starting small and thinking big by working from original principles instead of using pre-existing models.

Anyone interested in starting or launching a business has been advised to read Zero To One. Both entrepreneurs and non-entrepreneurs will find this to be an inspirational read.

Keep Reading: 7 Books Like Discipline Is Destiny You Should Read Next

By design, modern civilization confuses us and keeps people anxious all the time due to an unhealthy addiction to the future.

After becoming increasingly perplexed and bordering on laughing out loud at the seeming craziness surrounding everyone, the need for Don’t Give Two Shits was created.

Don’t Give Two Shits isn’t meant to imply that the author doesn’t care; the reverse is true. The choice to care must be made.

Yes, you only have so many minutes to live, and the only thing we can control is each one. Yet our imaginations constantly race with worry, prognostication, and, seemingly on purpose, pessimism.

The book Don’t Give Two Shits will show you how to worry about the things you need to worry about to improve yourself. This indicates that the amount of pain ruining your life will be reduced due to reading this book.

The magic moment when an idea, trend, or social behavior passes a threshold, tips, and takes off like wildfire is known as the tipping point. A little but precisely targeted push can result in new product popularity, fashion trends, or a decline in crime, just as one sick person can start an epidemic of the flu.

This critically praised blockbuster by Malcolm Gladwell, in which he analyzes and clarifies the tipping point phenomena, is already altering how people think about marketing goods and spreading ideas.

Simon Sinek found that the most influential leaders in the world all perceive, act, and communicate in the same way—and this is the precise opposite of how everyone else thinks, acts, and communicates.

This powerful concept, which Sinek refers to as The Golden Circle, offers a foundation upon which organizations, movements, and individuals can be inspired. And WHY is where it all begins.

Few organizations can properly describe their reasons for doing what they do, but most can explain what they do and their means of doing it. Money or profit is never the WHY; those are always the consequences.

WHAT is the purpose of your organization? WHY does it act in a certain way? WHY do customers truly choose to do business with one company or another? WHY do certain leaders have people’s loyalty while others don’t?

WHY is effective in politics, nonprofit organizations, and small and large businesses. Starting with WHY prevents manipulation and instead inspires. And those who adhere to them do not do so out of obligation; rather, they do it voluntarily.

Using a variety of true-life examples, Sinek creates a compelling picture of what it takes to lead and inspire. Anyone looking to inspire others or discover inspiration themselves should read this book.

Must See:  7 Books Like Can’t Hurt Me You Should Read Next

In this remarkable book, Malcolm Gladwell takes us on an intellectual voyage into the world of “outliers” — the smartest and brightest, the most renowned and successful. He asks what distinguishes high achievers from others.

He responds that we focus too much on the characteristics of successful people and not enough on their origins, including their culture, family, generation, and the unique experiences of their upbringing. He also discusses what makes a great soccer player, why Asians are brilliant at math, and how the Beatles became the best music band.

Brilliant and fascinating, Outliers is a groundbreaking study that simultaneously entertains and enlightens.

7.    By Malcolm Gladwell, Barry Fox, and Irina Henegar’s – Blink: The Power of Thinking Without Thinking

Malcolm Gladwell revolutionized our understanding of the world. He now fundamentally alters how we comprehend the inner world in Blink. The book Blink explores how we make snap decisions that aren’t as straightforward as they first appear. It also explores how we think automatically.

How do our brains function in the office, school, kitchen, and bedroom? Why is it that the best choices are frequently those that cannot be justified to others?

The books mentioned above offer an array of wisdom and knowledge from various stories and experiences to improve oneself. If you are in the market for some interesting novels about improving yourself, then the listed books are sure to help.

Short Summary of The Boy, The Mole, The Fox and The...