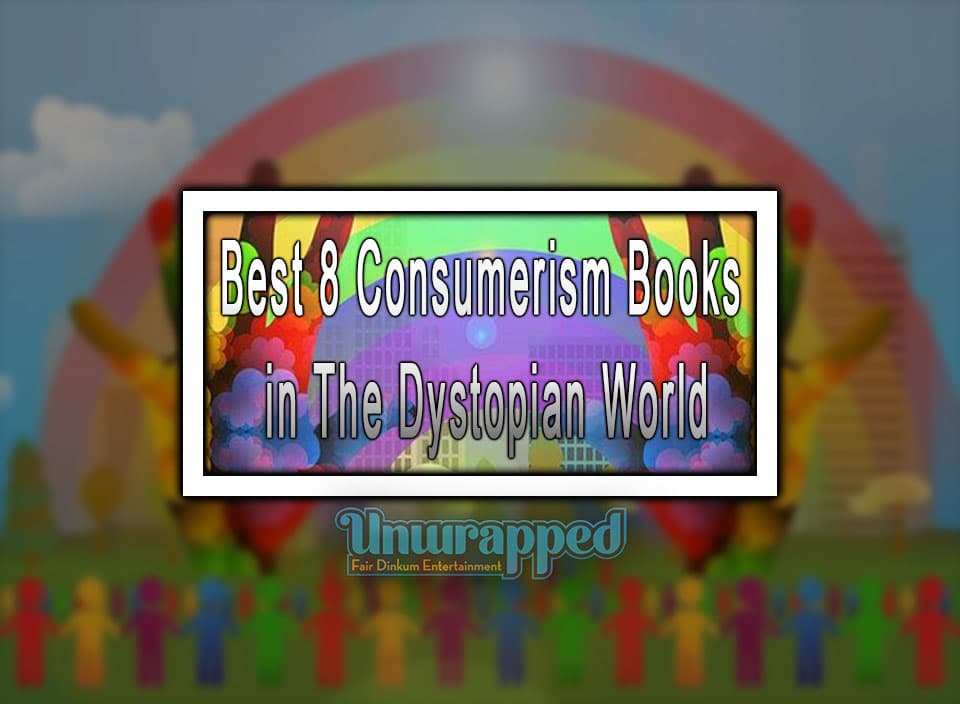 8 Novels Based on Consumerism in the Dystopian Genre

The dystopian fiction genre has paved the way for a wide array of other genres. From horror, sci-fi, historical fiction, and romance – it has become one of the most diverse genres in fiction. Most dystopian titles centre on apocalypse, war and violence, world destruction, and many other themes. Some boldly discuss relevant and timely issues of our time such as consumerism, climate change, and poverty.

Here’s a selection of dystopian titles that boldly tackles consumerism and its possible impact on the world and humanity.

The novel details the life of Jack Gladney, a Hitler studies professor, whose life is drastically changed after an industrial accident that creates a toxic airborne catastrophe.

This brilliant postmodern piece deals with conspiracy theories, fraud, and modern technology’s effects on humanity. It’s a deeply thought-provoking and poignant title that readers of all ages will enjoy.

Don DeLillo creates a compelling story with well-developed characters; all the while remaining to be well-paced and thought out.

After a devastating terrorist attack, the government puts heavy surveillance on its citizens through identification chips and other devices. After an accident, Jacob suffers from Cotard delusion, leaving him to believe that he is dead – making him the perfect assassin.

John Twelve Hawks rises to the top with his debut novel. He gives us a tale of what truly makes someone human and mankind’s struggle to preserve its humanity. It’s an overall worthwhile read for fans of the genre.

In a world that centres on innovation and technology, Bernard Marx aims to challenge the dystopian society of the World State, the novel’s fictional setting. When everything revolves around technology, even reproduction and emotions, Bernard is compelled to find a way to make it right.

Written in 1931, the novel is often considered prophetic for its realistically futuristic themes revolving around technology, psychology, and beliefs. It’s wisely-paced and doesn’t fail to deliver on its premise.

British novelist Aldous Huxley gives his readers a seamless and convincing world of dystopia in Brave New World. It is a must-read for everyone who enjoys speculative fiction.

Filled with modern slangs and colloquial expressions, the novel stays true to its young characters. It beautifully dabbles with important and timely issues through dystopian and sci-fi elements.

The novel reimagines a dystopian New York that’s painfully drowned in media and consumerism. Struggling Lenny Abramov, son of a first-generation immigrant, falls in love with Korean-American Eunice who wrestles with materialism.

Super Sad True Love Story doesn’t show its readers what they don’t already know. It instead highlights and elucidates complex issues in modern America through its flawed characters and insightful plot.

Gary Shteyngart cleverly crafts this dystopian yet hauntingly familiar world that will captivate its readers.

The novel follows the story of a dystopian society dominated by biotechnology and devastated by global warming. It’s a disorienting world wherein the earth’s main source of energy is calories. Emiko, a lab manufactured “New Person”, will serve as the catalyst in this cautionary tale.

Though depressing at times, the novel wonderfully tackles issues of climate change, consumerism, capitalism, and greed.

This highly anticipated debut from Paolo Bacigalupi creates a world that readers wouldn’t want to live in their nightmares. Well-written and well-thought-of, The Windup Girl is a must-read for the not-so lighthearted.

A nameless American woman who is often referred to as A deals with a meaningless, repetitive, and monotonous life. Swallowed by consumer culture and the mundaneness of existence, A is encouraged to join a reality show called That’s My Partner.

You Too Can Have A Body Like Mine is certainly an accurate title for this unsettling yet entertaining debut novel. It deals with issues of womanhood, conformity, and the struggle for acceptance.

This debut novel about female obsession will attract readers of all genders and ages. It’s an honest and bold take by Alexandra Kleeman about people’s construct of beauty and femininity.

This post-apocalyptic fiction details a dystopian California where wealthy survivors have all the necessities and luxuries and life and the poor live in a wasteland solitude. Pregnant, Frida and her husband, must find a settlement but not without obstacles in the way.

Character development is California’s strongest asset. It charms its readers through the character’s powerful storylines and a convincing future Los Angeles.

Edan Lepucki’s bestselling debut isn’t without its flaws but delivers on its inventive premise without disappointing its readers.

Speculating about how the world will be can be entertaining but can also serve as a warning.  Through these works of fiction, we can fiercely look into how consumerism has immensely changed the world. There are certainly other pressing and problematic issues that badly need to be represented. But looking at those that are familiar, such as consumerism, may help us respond to calls of action.