Before Salvador Ramos Opened Fire At Robb Elementary School In Texas, What Happened? 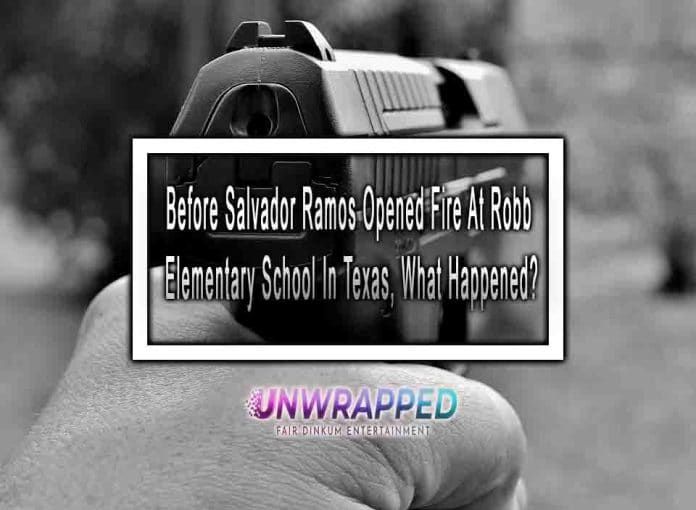 What We Know Thus Far About The Suspect, Salvador Ramos

Just hours before the murder, the 18-year-old shooter who opened fire at a Texas elementary school, killing at least 19 children and two adults, purchased two assault weapons on his birthday and looked to send some foreboding Instagram comments.

Many individuals who knew Salvador Ramos regarded him as “calm,” but a young woman who worked with him at Wendy’s until March noticed an aggressive tendency in him.

“He would be insulting towards the girls sometimes, and one of the cooks threatened them by asking, ‘Do you know who I am?’ And he would also send inappropriate texts to the ladies,” said the former coworker, who did not want her name used.

“At the park, there’d be videos of him trying to fight people with boxing gloves. He’d take them around with him.”

Authorities claim Ramos shot his grandmother on Tuesday morning before crashing his car near Robb Elementary School in Uvalde. According to Texas officials, he raced inside the school with a pistol and maybe a rifle.

Also See: In A Texas School Shooting, A Gunman Murders 19 Children And 2 Adults

“As soon as he walked into the school, he began killing children, teachers, and everyone else in his path.” Lt. Chris Olivarez of the Texas Department of Public Safety stated he was firing.

According to images given by the receiver, Ramos’ Instagram account sent direct messages to an adolescent in Los Angeles on Tuesday, telling her he wanted to share a “little secret.”

He stated that he would text the person in an hour and have to answer, but she said that she might not be awake. “Ima airs out,” he wrote as his final words.

Shortly after Texas Governor Greg Abbott identified him as the shooter, his Instagram account was removed. It included photographs and information about semi-automatic weapons and selfies of someone who looked suspiciously like the perpetrator in a photo released by the Texas Department of Public Safety.

Three days earlier, the user tweeted a photo of two guns, one of which seemed to be a Daniel Defence AR-15 with a high-capacity magazine. Someone was clutching a magazine in another shot from April 28.

Check Out: Benjamin Rich, A YouTube Travel Celebrity, Was Detained At The Baikonur Cosmo Drome

In the minutes after the Texas governor’s press conference, a TikTok account with the identical handle and profile photo as the Instagram was likewise pulled offline, with just a clip of a mobile game and the message “Kids be terrified IRL.” The bio line TheBiggestOpp was utilised by both accounts.

According to Texas State Senator Gutierrez, Ramos, who just turned 18 days ago, bought two assault firearms on his 18th birthday. It’s unclear if they were used in the slaughter on Tuesday.

According to the Daily Dot, Ramos’ Instagram buddy shared an image with the news outlet showing a receipt for a rifle he purchased from Daniel Defence, a weapons manufacturer.

According to John Morales, Ramos used to play the first-person shooting game Call of Duty with Morales’ 15-year-old son. The latter lives next door to his paternal grandmother. He said, however, that he had not seen Ramos in the neighbourhood in a long time.

Nayeli, an 18-year-old who didn’t want to disclose her last name, told The Daily Beast late Tuesday that she and Ramos were classmates, but she didn’t know him well. She claimed, “I took a math class with him,” and added, “He was quite quiet in there.”

According to Wendy’s coworker, Ramos did not appear to mingle much outside of his “emo” or “alternative” group of pals.

According to Janie Aviles, Ramos would occasionally assist her cleaning outside her house, a great-grandmother. The latter lived next door to Ramos’ paternal grandmother. “But it was when he was a kid,” Aviles murmured, her palm raised to her chest. “He hasn’t done it in a while.”

Aviles’ son, Gallardo Galindo, a Cargill fruit packer, told The Daily Beast that he saw Ramos around “every two months” but hadn’t seen him recently.

He added that some of his Cargill employees had family members touched by the massacre. “They had some cousins or family at the school when they learned about all of this.” When they found that the youngsters had been shot, they bolted.”

You May Also Like: Over Heard’s Abuse Claims, Disney Fired Depp From The ‘Pirates Of The Caribbean’

Stay Connected
41,936FansLike
5,685FollowersFollow
820FollowersFollow
Previous article
Everything We Know About The Film Crimes Of The Future
Next article
The Next Live-Action Series On Disney Plus Is Star Wars: Skeleton Crew