In A Texas School Shooting, A Gunman Murders 19 Children And 2 Adults 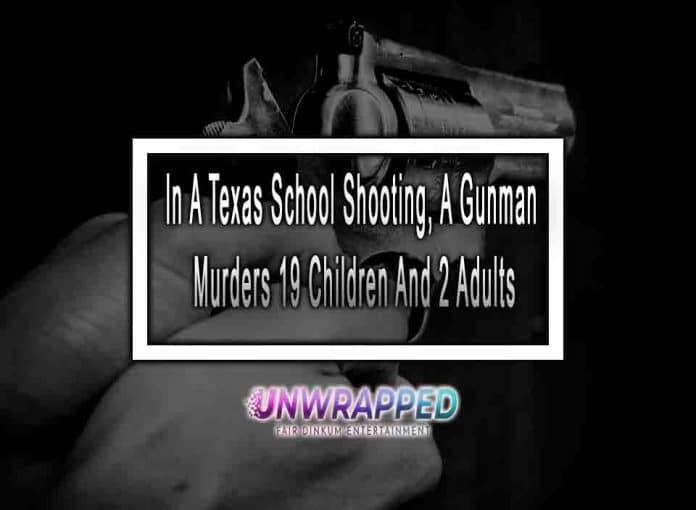 In A Texas School Shooting, 19 Students Were Among The 21 People Killed

At least 19 pupils and two adults were killed when an 18-year-old Texas man opened fire in an elementary school in Uvalde, a predominantly Latino city about 85 miles west of San Antonio near the Mexico border.

Texas Governor Greg Abbott told reporters earlier that at least 14 children and one adult had been slain in a school shooting in the state’s southwest. Roland Gutierrez, a Texas state senator, informed by state police and talked with media outlets, subsequently revised the fatality toll.

Gutierrez gave further devastating information about the tragedy, saying that the suspect shot his grandma at her house in the morning and then fled the scene in a car before crashing outside the elementary school. Gutierrez claimed he raced into the school and started firing.

According to the senator, three persons were seriously injured in the incident and remained hospitalised.

According to a police representative for the school, the students were in the second, third, and fourth grades. The school has roughly 570 students, and virtually all of them are Latino.

Although fourth-grade teacher Eva Mireles has been identified, few fatalities have been officially named. In a statement to ABC News, her aunt said, “I’m furious that these shootings continue.” “These kids are really innocent. Rifles should not be freely accessible to the general public.”

Check Out: Benjamin Rich, A YouTube Travel Celebrity, Was Detained At The Baikonur Cosmo Drome

At a news conference on Tuesday afternoon, Pete Arredondo, chief of the Uvalde consolidated independent school system police department, said the shooting occurred at 11.30 a.m. The gunman appeared to be acting alone.

The motivation was not immediately revealed, but Abbott identified the gunman as Salvador Ramos, an 18-year-old Uvalde resident.

Joe Biden delivered a speech to the country on Tuesday night after returning from a five-day trip to Asia. “It’s time to put this suffering to good use,” the president said in an impassioned speech, pushing for “common sense” gun laws.

Following a tragedy that drew instant analogies to the Sandy Hook murder, an 18-year-old man armed with an AR-15-type weapon massacred 20 first-graders and six instructors, numerous legislators, and prominent personalities called for action on gun control legislation on Tuesday. “Our society is paralysed, not by fear, but by a gun lobby and a political party that has demonstrated no desire to act in any manner that would assist in avoiding these tragedies over ten years after Sandy Hook – and ten days after Buffalo.”.

Senator Chris Murphy, who represented Sandy Hook in Congress, pleaded with his colleagues to adopt legislation to address the country’s gun violence epidemic. “What exactly are we doing here?” Murphy explained. “I’m here on this floor to implore my colleagues to physically go down on their hands and knees to beg them.” Look for a way ahead here. Work with us to pass legislation that makes this less likely.”

“Robb Elementary School will be closed, and all school activities will be cancelled until further notice,” According to Hal Harrell, superintendent of the Uvalde Consolidated Independent School District. According to Harrell, grief counsellors will be available starting Wednesday morning. “Today, my heart is crushed,” Harrell said. “Because we’re such a tiny town, we’ll need your prayers to get through this.”

You May Also Like: Alleged Texas school shooter identified: What we know about  the suspect, his motive and more.

Numb: What Do Dentists Use To Your Mouth?