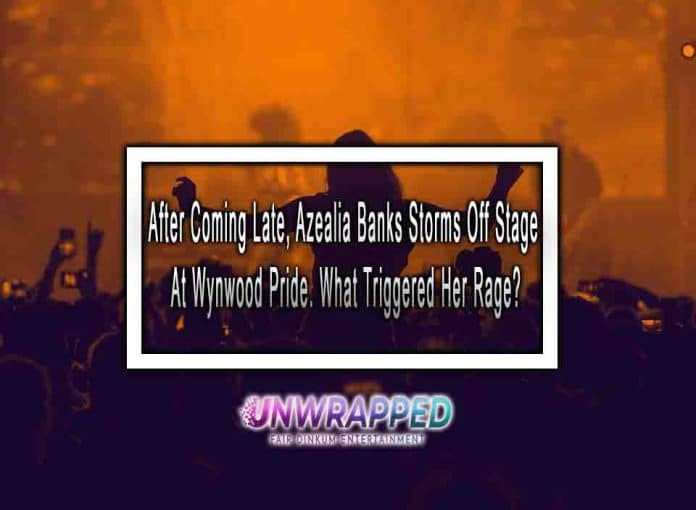 Also See: What Is Ramsay Hunt Syndrome, The Uncommon Facial Disorder That Justin Bieber Suffers From?

Banks is seen on video repeatedly telling concertgoers, “I’m really not thrilled to be here” and “I really don’t want to fucking be here,” after arriving onstage over two hours after the original set time. Banks had only performed a few songs at that period.

Her microphone was eventually turned off when more objections were directed toward the organisers (rather than the crowd). Banks then chucked the mike and began walking offstage while the audience booed, flipping middle fingers at the enraged mob. A drink was thrown, security was called in, and the event terminated barely four songs into it.

Banks detailed the cause of her outburst in a series of tweets following the incident: dry ice. “Wynwood Pride was excessively ghetto.” I needed to bounce. Every tech rider in Azealia Banks’ live performance history specifies that no dry ice will be used since she is susceptible to it. Massive clouds of dry ice began to make me lightheaded to the point that I could scarcely stand,” she said.

Check Out: Kim Kardashian Has Received The Most Backlash For Donning Marilyn Monroe’s Birthday Gown

“I literally have a text message from the promoter assuring me that there would be no dry ice implemented in my performance – yet, I Still came on stage to clouds of dry ice. I’ve performed Coachella twice and had that simple request honoured.”

“I was initially booked for a 10 pm set, which the promoter altered to 1 am, completely inconveniencing every single member of my staff,” Banks added on Twitter. Even though Banks’ start time was listed on the festival’s website as midnight, she didn’t take the stage until after 3 am, even though her band was ready to perform at 1 am, according to TMZ.

The Wynwood Pride organizers have yet to respond to the issue on social media. Banks was a problematic headline pick for the Pride celebration, according to the Miami New Times, since despite her LGBTQ+ fan base, the rapper has previously publicly abused the LGBTQ+ community.

You May Also Like Azealia Banks Storms Off Stage After Rant At Miami Pride Concert. Some fans booed the rapper, who accused the event promoter of unprofessionalism.