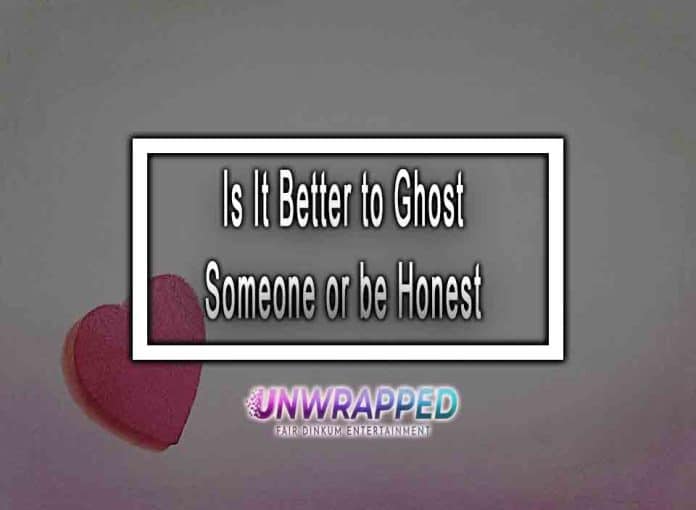 When someone you’re dating or have a friendship with vanishes without a trace, it’s known as ghosting. It may happen at any point in a relationship, whether at the start or in the middle, and it can happen in person or online. Being ghosted is tremendously challenging, especially when you have no idea why or how to respond. The individual abruptly stops communicating with you, refusing to react to texts, emails, phone calls, or social media messages. These activities’ receiving end can have serious mental health consequences.

Following are the Dos And Don’ts Of Ghosting-

It’s critical to have two-way communication so that both parties feel heard, according to Durvasula. The easiest method to accomplish this is in person, but a phone call will suffice if you can’t get together in person. Although texting isn’t the best method to end a relationship, it’s still preferable to ghosting. You may choose to split up at 2 a.m., but that doesn’t mean you have to do it then. Durvasula recommends meeting at a time that is respectful to the other person and how the news may affect them. Don’t dump them soon before they have to leave for work.

It’s difficult not to feel sorrow, embarrassment, and shame once someone abruptly vanishes. After all, you took a risk in the name of progress, and it backfired. While it may feel personal, ghosting isn’t about you. It all revolves around them. You may blame yourself if you can’t locate a reason and there isn’t an explanation. You might want to build some barriers, so you don’t get wounded again.

You might also use a cognitive distortion known as all-or-nothing thinking to convince your buddies that you will stop eating totally. It’s time to refocus, be kind to yourself, and take a break. You’re not to fault if someone walks away without saying anything. It’s also not your fault that the other individual couldn’t tell you the truth in a mature manner.

Breaking up is painful by nature, so it’s essential to accept that and prepare for it. When individuals desire to escape uncomfortable sensations, they ghost each other. However, a breakup hurts in any case and doing it in a direct, courteous manner lessens the pain. Please recognize that the other person will be upset, but it is not your obligation to make things right. After that, set aside some time to pamper yourself.

Even if you were the one who broke up with your partner, it might be pretty traumatic. While giving the other person feedback during a breakup isn’t required, it might help bring the relationship to a close. If you choose to respond to the person’s queries about what went wrong, do it in a considerate and compassionate manner that will benefit them in future relationships. Make sure they don’t feel horrible about it.

I’m no relationship guru, but I’m willing to guess that many people who disappear after a long relationship are narcissists. Narcs are the subject of another blog article, but they’ll usually dump you by ghosting once they’ve had their fill of you. If your ghost is also a narc, they will profit from your insanity. It will make them feel great if you blow up their phone for an answer.

If your individual does not meet the narc requirements, they may have ghosted due to a personal issue. As a result, the ghosting isn’t your fault (it never is) but rather theirs; they need to improve on something. Although it is a selfish act, they may have believed it was the best approach to manage the situation. Regardless, it is still unpleasant, but gracefully bowing out is critical.

Experts in social media relationships may differ, but don’t erase them just yet if you’re friends with your ghoster. First, see if they delete you. You’ll know they’re still alive and’ve given up on you if you do so. If you’ve tried calling, texting, or messaging them on Facebook and they don’t react, they’ll delete/block you on social media. Even better, you can block them if they unfriend you after that. You haven’t heard or called from them in a couple of hours or days.

You have the impression that you require an answer. I, for one, despite being ignored. My worst blunder was insisting on messaging and phoning until I received a response. But don’t be like me; instead, strive to be better than me. If you haven’t potentially heard from them in a few hours or days and they haven’t reacted to your attempts to reach them, gracefully walk away. If they don’t respond right away, don’t worry.

If you want to potentially respond to ghosting in a way that they will remember for the rest of their lives, don’t beg them to come back because you don’t want them to start hoovering like a potential narcissist a few months later. Instead, look them in the potential eyes and give them the cold shoulder. Do you still send messages to your love interest, hoping they will suddenly realize you are their soulmate because you genuinely care? Are you constantly texting them things like “I miss you,” “Where are you?” “I’m preparing your favourite food,” or, worst of all, “I’m wearing your favourite clothing”, only to get a response? Please, don’t do that!

A person who does not have the decency to express their thoughts openly does not deserve even a fraction of your time. Accept your fate as a ghosted person and go on. Trying to get them to respond will drive them further away. Being a ghost yourself is a clever technique to react to ghosting.

Although ghosting isn’t a trend, the hyper-connectedness of online 21st-century living has made it simpler to stay connected and has, by default, made it more apparent when a relationship has ended abruptly. Whether you’ve been ghosted or are the ghost in question, the first guideline to remember is the so-called golden rule: treat people as you would want to be treated. It can be difficult and unpleasant to end a relationship, but treating individuals with love and respect can go a long way in current and future relationships.

See This: Recognise The Signs Of A Relationship

Stay Connected
47,167FansLike
5,664FollowersFollow
840FollowersFollow
Previous article6 Pieces of Dating Advice I Wish I Knew When 18
Next articleWhat Happens To Your Skin Over The Course of 24 Hours