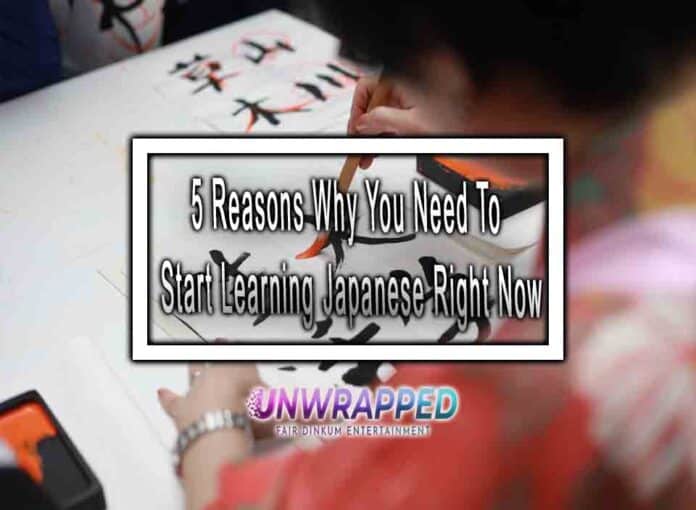 Are you thinking of learning a new language but don’t know which one yet? Learning a new language can have plenty of benefits from having a flashy resume and having a profound understanding of a whole new thing but which language should one learn as a beginner? Here are five great reasons why you should opt for learning Japanese for a more global and international outreach – have a look!

Did you know that the Japanese language is in high demand all over the world? With great career opportunities in London, Paris, New York, Melbourne, etc. this is also true because there aren’t a lot of people in the world that speak Japanese as their second language with decreases the competition and raises your chances of getting hired. Other than this the job opportunities for foreigners in japan are also significantly high because of the chronic labour shortage in the country. Learning Japanese will increase your value in the job market opening doors to job opportunities in numerous sectors like IT, automobile, mechanical, textile, healthcare, construction, international logistics, immigration services consultant, creating anime shows, culinary, and even freelancing! It’s also a great add-on for resumes and student applications helping you stand out of the crowd.

Being the world’s third largest economy; there’s a reason why you see the yen currency in the financial rankings. Learning the Japanese language will give you the upper hand while dealing with japan’s local specialists on trading platforms. The world’s economies are becoming global and it’s also a great idea to learn Japanese for smooth interaction with people around the world. You can easily branch out your business making it international and branching it out. You’ll be surprised to see that learning even one additional language can greatly improve your prospects.

Another great reason to learn the Japanese language would be the fact that Japan is known for its advancement in technology and is way ahead of its time in innovation with breakthroughs like the bullet train, android robots, pocket calculators, etc. It will allow you to get the opportunity to work with the latest advancements and improve your capabilities in the world of data science and high-tech innovations. It will open your mind to a pool of endless possibilities and creativity to find solutions to boost your mental strength.

If you’re someone who loves learning new things and exploring different cultures and traditions, learning Japanese could greatly benefit you to understand Japanese culture more deeply. The Japanese culture has a whole other fan base because of its unique island-nation geography and isolation from the outside world. It has a rich and beautiful history dating back to prehistoric times with a magnificent coexistence of both their historical and traditional world with the high-tech modern world. Learning the Japanese language will give you the ability to understand their culture and their world-famous values transforming you inside out.

Learning the Japanese language gives you an insight into their rich culture which is heavily influenced by more Asian cultures like that of Korea, China and India.  So technically you won’t only be learning about a single culture and its language but allow to touch upon many other Asian languages as well. Japanese is comparatively easy to learn after which you can learn languages like Korean and Chinese pretty easily as well because of the similarities between them.

The world today is increasingly becoming more hyperconnected and learning Japanese could give you that zesty edge to stand out and make the best of this opportunity right away!

5 Benefits of a Polish Passport

How To Make More Money Out Of Your Side Jobs?

What To Know About Personal Injury Lawyers in Westlake Village, CA

The Benefits of an Accounting Course

5 Benefits of a Polish Passport

How To Make More Money Out Of Your Side Jobs?

What To Know About Personal Injury Lawyers in Westlake Village, CA

12 Scholarships in Australia for International Students