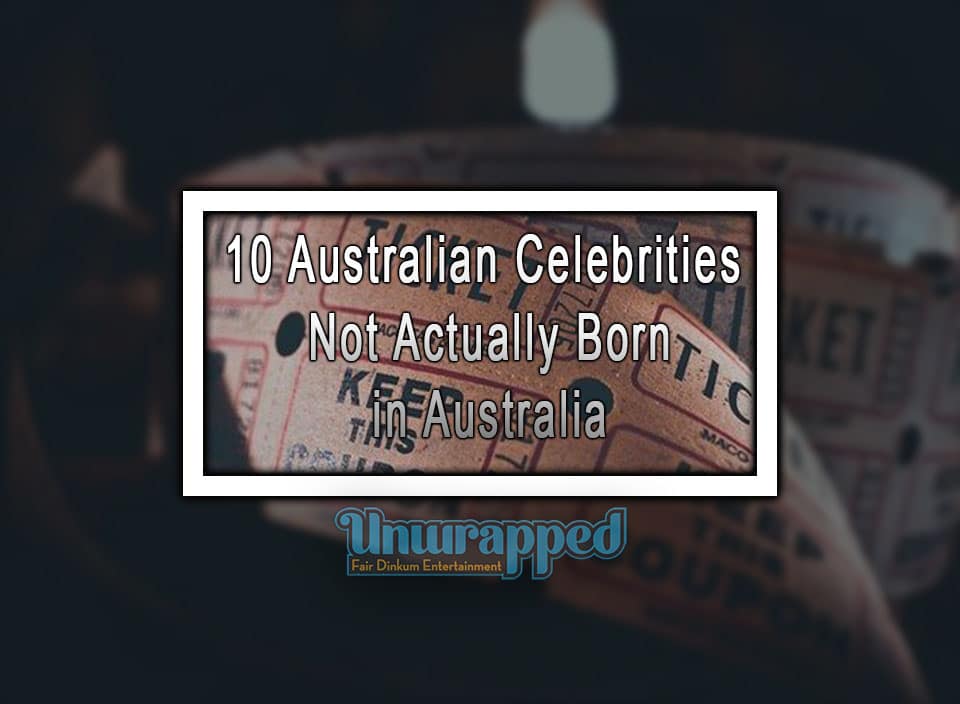 Australian at Heart: The Top Australian Celebrities Who Are Actually Born Overseas

Australia may be a big country with a lower population as compared to European countries and the United States. However, this does not mean that it lacks the environment to culture talent when it sees one. The entertainment industry of Australia is welcoming to actors, singers, and other entertainers, who are given access to the support system they need to hone their talents. No celebrity is born a star – they start out in small bars, act small roles for commercials, or are extras in television shows. Through hard work, many have now become household names and have shone beyond the country, becoming big names in the acting and music industries. However, to the surprise of many, some of them are Australian entertainers not really born in Australia! We have adopted them as our own because they grew up and actually started their careers in our country. But here are some famous Australian celebrities who are actually born overseas.

Nicole Kidman is arguably one of Hollywood’s best actresses. The recipient of many awards, she has several Golden Globes, Emmys, and a Cannes Film Festival Special Award under her belt. Kidman is one of the most famous Australian celebrities who are actually born overseas. Born to Australian parents who were in the United States temporarily, she was born in Honolulu, Hawaii and they moved back to Australia when Nicole was four. They made Sydney their home and this is where she spent most of her childhood. Kidman started in minor roles for Australian television and movies before being cast in Dead Calm, her first big break. Future husband noticed her and decided to cast her in Days of Thunder, marking her Hollywood debut in 1990. She went on to have more roles, casting her in romantic comedies, dramas, and superhero films.

An actor, musician, and film producer, Russel Crowe is another Australian celebrity who was born in another country. He was born in Wellington, New Zealand. His family moved back to Australia when he was four where they settled in Sydney. After a decade, they returned to New Zealand where Crowe attended school but left at 16 to pursue an acting career. He started as a musician and released a few singles which did not become famous. At 21, he went back to Australia and soon got a professional theatre role. He appeared in some Australian television series and in 1990, was cast in his first film The Crossing. He won his first Best Supporting Actor Award in 1991 and the following year, he won his first Best Actor Award for Romper Stomper. He starred in a Canadian film the following year before focusing on American movies. He has received several awards and has been nominated for the Academy Award three times.

Despite controversies, Mel Gibson is still one of the most successful Hollywood actors and filmmakers today. Born in Peekskill, New York, his family moved to Sydney when he was 12. Gibson studied at the National Institute of Dramatic Art. He was noticed for his role in Australian film Mad Max in 1979, and he soon moved to the United States to reach for his Hollywood dream. He starred in the Lethal Weapon franchise and in 1995, got his Oscars for Best Director and Best Film for Braveheart, a movie which he directed and starred in. His 2004 film The Passion of the Christ is still played during the Holy Week years after its release.

This Australian rock band formed in 1973 in Sydney is formed by brothers Marcus and Angus Young. Famous for being a blues-rock, heavy metal, or hard rock Australian band, the brothers were actually born in Glasgow, Scotland. Together with 3 other members, the band made a tour of local clubs. They became well known for their strong live performances, where the members usually wore loud glam costumes. After several changes in the band’s lineup and getting themselves a manager, they recorded the Australian album High Voltage in 1974. For the next years, they released several singles, recorded another album, and played in television programs. They moved to London after getting a contract with Atlantic Records and released albums. AC/DC had changes in the band’s lineup again following their European tour and after suffering the death of lead singer Bon Scott, the band contemplated taking a break. Upon the encouragement of Scott’s family, they hired another frontman who will see AC/DC through the low times of the 1980s and the renewed success of the 1990s. The band formed by the Young brothers has been an influence in the development of rock music, making them one of the greatest artists of all time.

Marcus and Angus Young of the AC/DC were not the only band players of the family. Their brother George was actually the first one to learn how to play the guitar. George became a member of one of Australia’s most successful bands, The Easybeats. Though they were only active for about five years from 1964-1969, it is noteworthy that the first Australian rock and roll band to have an internal pop hit is made up of members who were not born in Australia – from Scotland is rhythm guitarist George Young, from the Netherlands, are bassist Dick Diamonde and lead guitarist Harry Vanda, and from England are drummer Gordon Fleet and lead singer Stevie Wright. The band signed with a local independent label and released singles that earned them places in Australian charts. They reached international stardom when their songs were released in the United Kingdom. They toured Europe as a support group to Rolling Stones. However, the popularity was short-lived and after some changes in band membership, they later disbanded in 1969. They had a reunion tour in the 1980s and the members, who have experienced relatively successful solo careers after the disbandment, are now in retirement.

Naomi Watts got her big break starring in Mulholland Drive, the critically-acclaimed film by David Lynch. But before that, she was featured in commercials and even auditioned for a role where she met future best friend Nicole Kidman. Naomi Watts was born in England, another Australian celebrity not born in Australia. She appeared in several films, one alongside Kidman and one with Russell Crowe. Naomi was noticed by critics in 2001 when she starred in Mulholland Drive. The following year, she hit box office stardom in The Ring and in 2003, Watts finally earned her first Academy Award nomination. She has since then appeared in several actions, drama and thriller films.

Olivia Newton-John is an award-winning Australian actress, singer, and songwriter. This four-time Grammy Award winner who has many Billboard Top 100 hits and several RIAA gold certifications is one of the world’s best-selling artists. Often called the quintessential Australian celebrity, Newton-John was actually born in Cambridge, England. She was six when her family moved to Melbourne. She went on talent shows and appeared on radio and television programs as a young singer. In one of the contests, she won a trip to Great Britain and reluctantly went there at the encouragement of her mother who wanted Olivia to broaden her horizon. She recorded her first in Britain and in the following years, toured Europe with her singing partner from Australia, Pat Carroll. She became known in the United States in the 1970s. Olivia earned her first Grammy award in 1973 for Best Country Female. She lived in Britain while continuing to release her albums before moving to the United States. Famous for her many singles, she will forever be loved for her role as Sandy in Grease, the 1978 Broadway musical that catapulted her to stardom.

Born in Muscat, Oman to Scottish parents, Isla Fisher moved to Australia when she was six. Her family made Perth their home. She started as a young actor, appearing on Bay Cove, a children’s adventure series. She appeared in television commercials and television series before getting her big break on the soap Home and Away. Isla attended an acting school in France where she studied professional theatre, comedy, and mime. She made her Hollywood debut in the film adaptation of Scooby-Doo in 2002. Fisher has been since then featured in supporting and main roles for comedies, romance, drama, and thriller films. She has also lent her voice to animated films and has penned two young adult novels.

This Australian musician and actor were born in Cambridge, England to English and New Zealander parents. When Guy Pearce was three years old, his family relocated to Geelong, Victoria. Pearce was active in theatre productions when he was younger and actually got his first film role while still attending school in a university-promoted production. He transitioned from theatre to television when he was cast in Neighbors, an Australian drama series. He then appeared in several Australian movies and got international attention when he attended the Cannes Film Festival for the premiere of Hunting in 1991. Pearce got his film breakthrough when he played a drag queen in The Adventures of Priscilla, Queen of the Desert. Since then, he has appeared in several American and Australian films and still performs in Australian theatre productions. As a musician and songwriter, Guy Pearce has released an album in 2014 and followed it up with the second one in 2018.

A singer, songwriter, and producer, Keith Urban is another Australian celebrity who was born abroad. Urban took guitar lessons as a child when they moved to Caboolture, Queensland from Whangarei, New Zealand where Keith was born. He made his rounds on local talent shows, performing in a band during summer holidays, and slowly made a name in the country music scene. In 1990, he signed with EMI Australia and released his debut album. He moved to Tennessee in 1992 and throughout the next years, continued on performing, writing and producing songs which charted and made him a household name in country music. The past decade has seen Urban releasing top hits, performing in concerts, and going on tours. He has also become a judge in the American talent shows Americal Idol and The Voice, a nod to his achievement as a musician and performer.

Read More: Top 10 Cheap and Cheerful Eateries in Australia In 2020

Many singers, entertainers, and actors recognize Australia as their home even if they were not born down under. The theatre, film, movie, and music industries are welcoming to those who have talent and are willing to work hard to hone these gifts. Many Australian celebrities who are actually born overseas started their careers in the country, getting the experience and exposure they need in order to shine in bigger and brighter stages. They are now renowned and respected individuals in their own fields, inspiring many others who are just starting with their careers. With hard work, determination, and the proper environment that gives encouragement and support, anybody can reach their dreams of touching lives through their performances and stages.

Who is the most famous person in the world of all time?

The Rock. Dwayne Johnson, known as The Rock, is the most famous person in the world. He became popular during his days as a WWE champion wrestler until he moved on to become a Hollywood movie star.