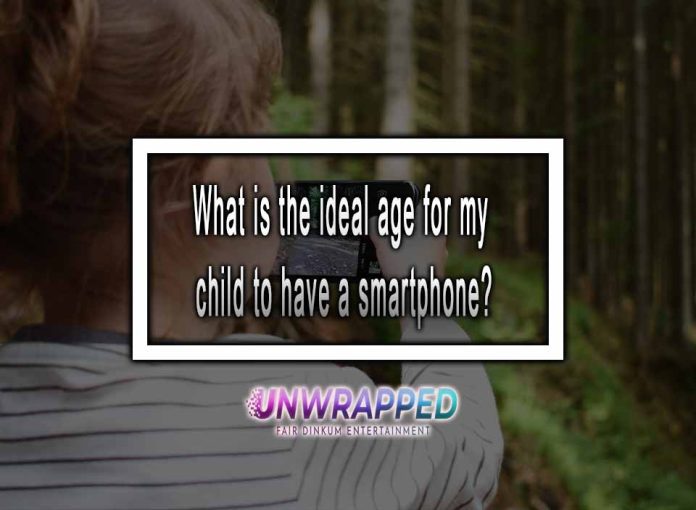 What is the ideal age for my child to have a smartphone?

In a completely connected world where children are becoming more immersed in the realm of technology at a younger age, the subject of when children should begin using cell phones is becoming more significant.

We don’t want to tell you how to raise your kid, but we do recognise that some parents are torn between putting the brakes on and allowing their child to use any gadget they want.

As a result, the information in this piece will undoubtedly assist individuals who are more indecisive and seeking more reasoned and less impassioned responses.

What is the best age to start using a smartphone?

The IT sector has been silent on the subject. She doesn’t want to get engaged in a potentially sensitive topic, to begin with. Not to mention that any view expressed might have an influence on sales.

Two possibilities have recently been proposed in scientific studies:

In general, a youngster should start using a smartphone when he or she is between the ages of 10 and 12. In actuality, this is more or less what happens: according to some research, 70% of 12-year-olds already have a smartphone.

However, the theory is one thing; practice (and the actual world) is quite another.

Does the child not having a smartphone mean he doesn’t use one?

Certainly not! Even though these children’s parents are, in most situations, their children’s telephone providers.

The lack of a smartphone does not exclude a kid from using one. This must be considered to arrive at the most sensible response to the following issue, which, depending on the parents engaged in the matter, may be the most significant of all…

Does your child NEED a smartphone?

Starting with the age principle, children as young as ten years old begin to socialise, and the smartphone may be a convenient method to communicate with friends, particularly on weekends.

It’s also worth remembering that the smartphone may be a valuable study ally like the PC before it. That is, if the phone is utilised appropriately.

If the youngster is under the age of ten, the smartphone is less appropriate for these two uses.

On the other hand, the worldwide health problem has significantly altered the dynamics of our lives, with video conversations and text messages becoming more popular among everyone… even children.

Read On: Why You Should Avoid Recharging Your Smartphone to 100%

So… what’s the answer?

There isn’t a conclusive solution.

At this stage, the response is dependent on the profile of each kid, their behaviour, and their requirements, rather than on age group theory. And only parents have the ability to assess this.

If the youngster is in a situation where using a smartphone is really important, he will always say so. As a result, parents must pay close attention to the symptoms that will appear in daily conduct.

Also, Read :Is There a Problem With The Battery In iOS 15.4

When Should You Get Your Kid a Phone?

The average age kids get a phone is between 12 and 13. With that in mind, parents are the best judge of whether their children are ready for a cell phone, and the lessons they teach about that readiness can begin at a young age.

Questions You Need to Ask While Hiring a Real Estate Agent