Is There a Problem With The Battery In iOS 15.4 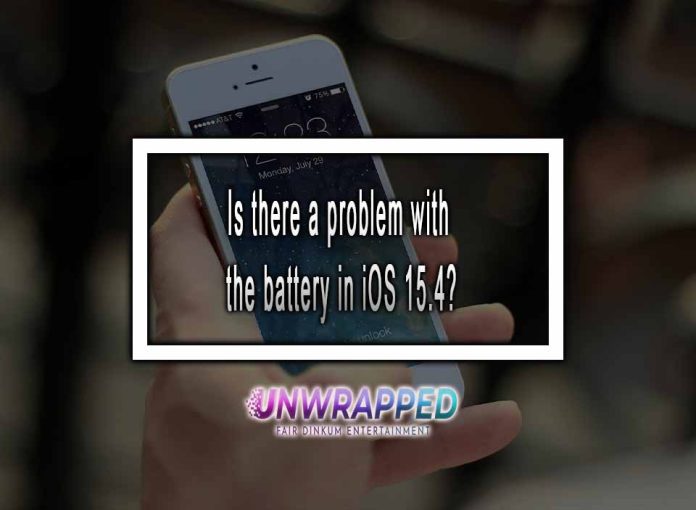 Is there a problem with the battery in iOS 15.4?

iOS 15.4 has been out for a week, and its key feature is the ability to unlock the iPhone with Face ID while wearing a protective mask. Okay, the appeal was indeed at least two years late. But, hey, it’s better to be late than never, right?

In addition, the new software includes new emojis as well as various security patches, as is customary with each interim operating system version. No one anticipated iOS 15.4 to come with an unwelcome surprise for owners of certain iPhone models.

Many reports claim that iOS 15.4 is depleting the battery life of numerous iPhone models, and in this piece, we’ll attempt to figure out what’s going on.

iOS 15.4 drenando a bateria do iPhone

Apple isn’t disputing that the issue exists at this stage in the season. The number of complaints on social media and on the company’s own forums is steadily growing, with most of them mentioning the battery issue.

It’s critical to remind irritated people (and you have every right to be concerned about this) that software upgrades may always create issues. Users of Windows 10 will be able to tell you more about it if you ask them.

The good news is that Apple has responded to the issue on Twitter, indicating that it is not a permanent issue.

According to the Cupertino giant’s support account, changes made to the software compared to previous versions may take into account certain programming readjustments, for both operating system functions and applications installed on the device, in response to one of the users who complained about the battery draining after the iOS 15.4 update.

To put it another way, the improvements made in iOS 15.4 need the operating system to adapt over time. The software has to communicate better with the hardware and understand the iPhone owner’s use history to learn from it and better manage energy consumption.

From the time you install iOS 15.4 on your device, Apple claims that resetting these capabilities might take up to 48 hours. Users should contact technical support for additional inquiry if issues remain beyond this time limit.

Is battery drain happening to everyone?

No, thank goodness. That isn’t to say the issue doesn’t exist.

Other elements, such as the age of the iPhone that got the update, the user’s profile, the applications loaded, and other things, must be included into this equation. Even then, some individuals have been waiting for more than 48 hours for their smartphone’s battery usage to return to normal, and it hasn’t happened.

As a result, the true solution is to wait for Apple to work fast and professionally to figure out what is really going on and, as a result, to provide the update that will permanently fix these issues. That is, for some individuals, sitting and waiting is the only option.

Also, Read : The Battery On The IPhone SE 5G Is a Failure

Why is my battery draining so fast iOS?

If your iPhone battery is draining fast, a slew of factors can be responsible. Start by checking your battery’s health in the Settings app; it might be time to replace the battery. You can also see which apps drain your battery the fastest, control your screen brightness, and disable location services.

Stay Connected
52,681FansLike
5,667FollowersFollow
829FollowersFollow
Previous articleThe Battery On The IPhone SE 5G Is a Failure
Next articleHow Can I Make My Home More Energy Efficient?