Why You Should Avoid Recharging Your Smartphone to 100% 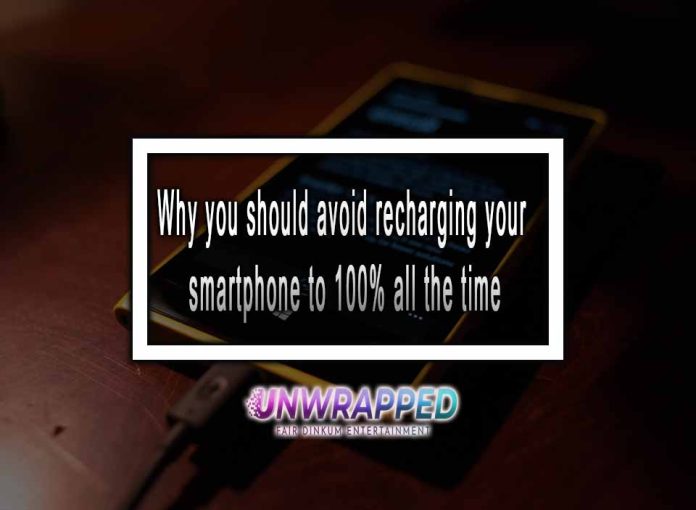 Over time, a person’s behaviours become ingrained. It’s also difficult to break free from the daily or weekly habits we’ve developed. And it isn’t today that I am informing readers that we are charging our cell phones’ batteries incorrectly.

Either we leave the phone charging all night, or the gadget continues to receive power until it achieves 100% charge. For the sake of the battery’s life, we shouldn’t do it.

No one, however, has provided a plausible explanation for why we should not charge our smartphones to 100% in all recharge cycles. That’s exactly what I’m going to accomplish in this article.

It’s hardly a “all or nothing” situation when it comes to charging a smartphone battery. What exactly do I mean by this? I mean, you shouldn’t even let the phone’s battery die fully, much alone get to 100% of the way through the procedure. There is a recharge restriction in place to keep the battery health as current as feasible. For the greatest long-term performance, many experts (including me) advocate unplugging the charger from your phone after the charge reaches at least 80%.

Also See: Is There a Problem With The Battery In iOS 15.4

Leave your phone charged up to 90% for a workday if you need a little additional juice.

Believe me when I say that the process is a modern-day product. Previously, batteries suffered the notorious ” memory effect,” in which charging a phone from 1% to 100% caused it to “forget” its true full capacity. On the other hand, current lithium-ion batteries do not need to be charged to 100% for one simple reason: doing so stresses the battery, since the maximum voltage is created when the component is completely charged or drained.

In this instance, it’s better to let the battery partly deplete before charging it again as needed during the day. To minimise stress and the ageing of natural components. OK. I know what you’re thinking at this moment…

But… Can I charge the battery several times a day?

Yes, you certainly can. It is also suggested to prevent battery degradation over time. Do you tend to leave your smartphone charging in the middle of the night? So… don’t even think about it! Charging your smartphone numerous times during the day is less harmful to your battery’s health.

When the charge hits 100 percent, the phone begins to make little, sluggish charges as the battery loses thousandths of a percentage and, as a result, the charge drops below 100 percent, forcing the charger to restart. action is required to fulfil this charge

As a result, it’s important to keep the battery at 20% (at the very least) and let it entirely drain from time to time to calibrate the IDs.

If you don’t follow this advice, your battery will drain quicker. Not to mention environmental issues like utilising a low-quality charger or exposing the gadget to extreme temperature changes.

Finally, smartphone batteries have a usable life that might be greater or shorter depending on how you use the device. The end will come, and it will no longer provide the same results as it did on the first day of usage (though you still can replace the phone’s battery).

However, the steps outlined in this piece may help you avoid the end occurring sooner than required.

The Battery On The IPhone SE 5G Is a Failure

What is smartphone used for?

A smartphone is a cell phone that allows you to do more than make phone calls and send text messages. Smartphones can browse the Internet and run software programs like a computer. Smartphones use a touch screen to allow users to interact with them.

5 Virtual Jobs to Make Money While Going to College

Investing in Cryptocurrency: Is it safe or not?

Solar Providers Near Me: How to Choose the Right One for...