What do Aboriginals Call Australia? | The Reasoning Will Make You Wow!!! 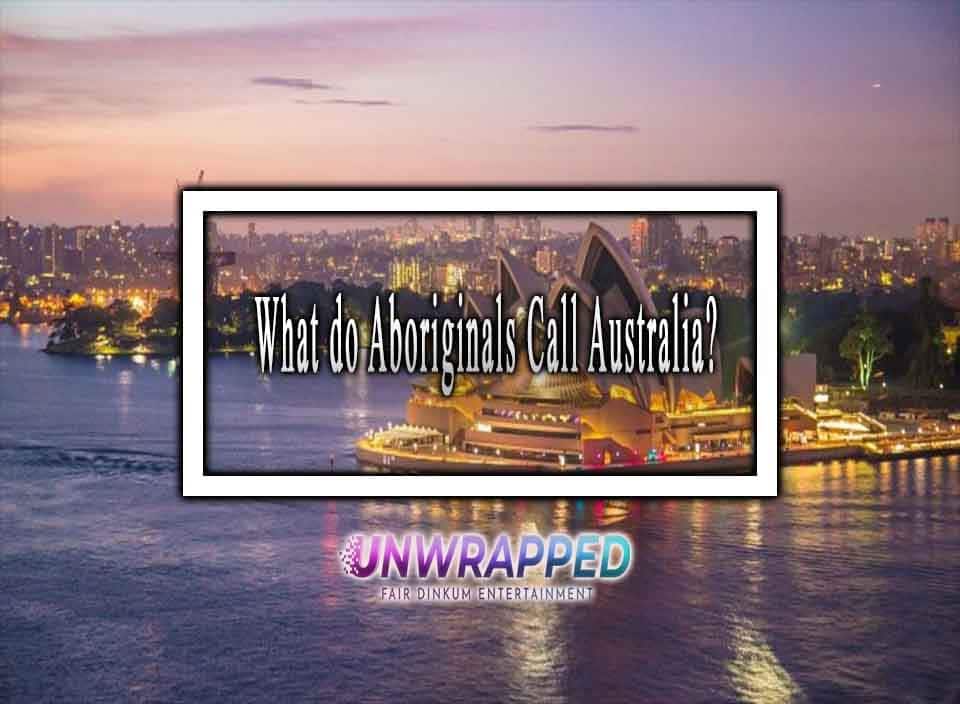 Aboriginal Australians or indigenous Australians are diverse communities of people who have settled in what is now Australia for over 50,000. The term aboriginal is derived from a Latin word that literally means “from the beginning”. Thus, these groups of people are the first groups to settle in the area. Apart from South African populations, they are believed to be one of the oldest human populations in the world.

The Aboriginal Australians are composed of two main populations: those who reside in mainland Australia and those who live in the Torres Strait (now a part of Queensland, Australia). These populations are quite diverse, with unique language groups such as Meriam Mir and Torres Strait Creole. Furthermore, the Aboriginals were mainly composed of several tribes; each with their own social rules, culture, and practices.

Thousands of years ago, when today’s Australia was still inhabited by its first people, it did not have a name. It is possible Aboriginals must not have thought of the land as separate or distinct from others. Meanwhile, it is also possible that the Aboriginals had this concept but if they had assigned a name for what is now Australia, it is not known. It is not clear what term or name they used to refer to their land.

Most likely, the Aboriginals had created terms or names for several familiar features and places in their land. This includes mountains, oceans, lakes, local areas, and other similar features. Furthermore, the Aboriginals’ language evolved according to what they had to deal with back then. Most of the Aboriginals would have travelled to nearby places, although not extensively for them to figure out that they belong to a large continent. Thus, the term for their whole “continent” or “country” probably never arose.

Keep in mind that the Aboriginals had over 200 diverse and rich languages. When they talked about “Australia”, they just referred to it as land or ground. Thus, they often call their land uthuru in the Midwestern portion of Australia; barna in the Murchison region; biik in the Woiwurrung language of Melbourne; and kurrek in the Wemba Wemba language of Victoria. These are mere generic terms that literally meant ground or land, and not really a specific term they unanimously used to refer to their continent or country.

However, the name Australia can be traced back to European navigators. Even before they came to Australia’s lands, Europeans knew that there is an unknown land in the Southern Hemisphere which they referred to as Terra Australis Incognita which is Latin for unknown southern land. In the 1800’s, Dutch navigators named the continent as New Holland. However, Matthew Flingers, a navigator, is known to prefer the term Terra Australis or Australia to refer to the continent.

Australia was Made Up of Many Countries

Nowadays, Aboriginal Australians refer to the land of Australia in the same way other people do – Australia. This is why many would see and hear the terms First Australians, First Nations Australia, and Australia’s First People are becoming more widely accepted. First Peoples is a term used to refer to people in Australia who have been there from the beginning.

The British Invasion has resulted in many Aboriginals’ lives, significantly cutting down their population from about one million to just around 60,000. Moreover, the invasion also resulted in the loss of lands and farms for the Aboriginals. The Invaders saw the land as Tierra nullis (meaning land that is unoccupied) and decided to take as many as they can get. The Aboriginals rarely concerned themselves with issues of land ownership. It was more of a Western concept that the Aboriginals didn’t find relevant as they had been free to wander and settle in their own lands for hundreds to thousands of years already. Furthermore, differences in languages may have also played a part.

As more foreign invaders settled in Australia, the Aboriginals were pushed further away from their farming lands to the arid portions of the continent. This has put them in a poor situation economically. Furthermore, it has also resulted in their poor health as they began succumbing to diseases. Many were taken away from their families and their homes were subjected to land grabbing by the British invaders. It was only in 1992 that a law called for these aboriginal lands to be turned over, and that these lands are no one’s property and can be claimed by anyone.

Some aboriginal names for towns and other locations managed to survive up to this day. This includes Wagga Wagga, a regional city in New South Wales; and Parramatta, which is now a commercial district city also in New South Wales. However, for the rest of Australia, it’s unfortunate that most of them don’t have a trace of their aboriginal roots and origins.

We should keep in mind that terminology and name preferences vary across different communities and individuals in Australia. As previously mentioned, there are hundreds of Aboriginal languages that have been used and are still being used today. Thus, we should consult with the local citizens and other members of the community to know the preferred terminologies and names, as well as inappropriate or unacceptable ones.

Language is an integral part of any kind of society. It is the main means of communication and exchanging information. Unfortunately, it could also create barriers and also become a source of discrimination. Thus, it is imperative that we educate ourselves  Using the right terms and terminologies are essential in promoting social justice as well as preserving the indigenous Australians’ culture and identity.

Also, Read : 4 Unique Things To Do In Australian Capital Territory (ACT) With Family In 2022

What do aboriginals call Australia?

The Aboriginal English words ‘blackfella’ and ‘whitefella’ are used by Indigenous Australian people all over the country — some communities also use ‘yellafella’ and ‘coloured’.