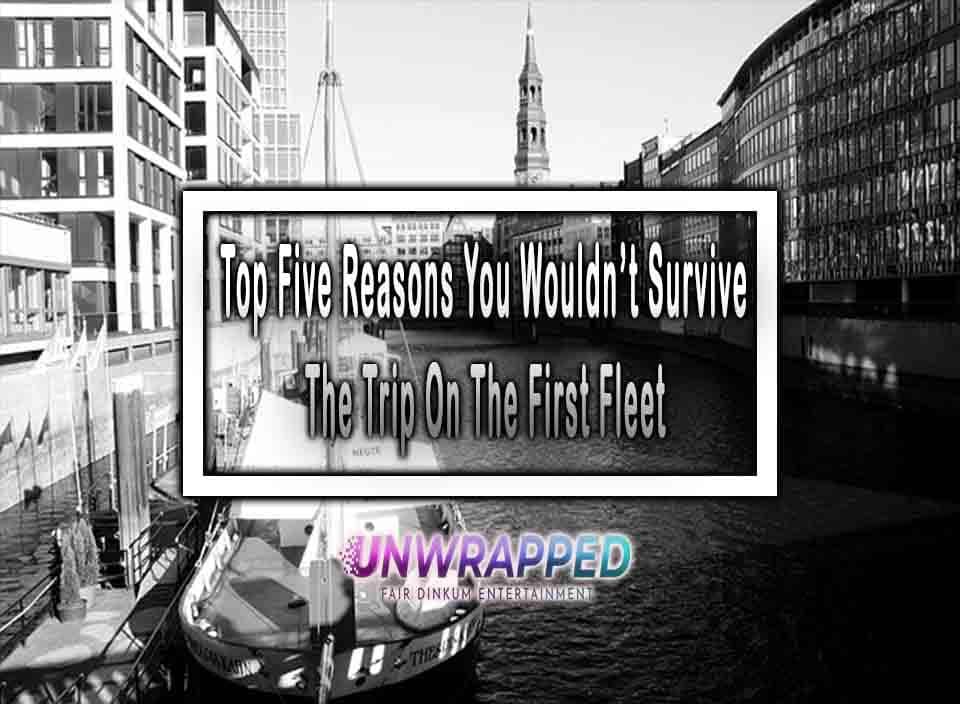 The departure of the First Fleet in 1787 is one of the crucial moments of Australian history. In this batch of ships, civilians and prisoners journeyed from London to Sydney to create the first English settlement in the subcontinent. On January 18, 1788, the passengers arrived at what became Sydney.

Their dangerous and tiring journey on the high seas lasted eight months. But their struggles did not end when they landed—it was only the beginning. The settlers and colonists fought against the Aboriginal nations in Australia. Wars and massacres soon followed. Meanwhile, the British established penal facilities and towns in Norfolk Island, Tasmania, Brisbane, and Western Australia.

It is an imaginative exercise to imagine yourself in history. Would you survive becoming a passenger of the First Fleet from Britain to Australia? No, and these are the reasons why.

1. They had limited food in those ships.

During the 18th century, people did not have refrigeration and modern nutrition science. So they struggled to keep their food fresh and nourishing while keeping it tasty. It was a problem for people on land, but it was worse on ships and fleets.

Sandy Oliver, a reputable food historian, described how delicate this issue was for 18th-century sailors. The role of food in ships was beyond survival; it also affected their morale and performance during months of travelling on seas.

The food that ship crews ate depended on their rank and hierarchy. Captains and their staff could eat bread, fruits, fresh meat, milk, sugared treats, and spiced meals. However, typical passengers did not enjoy such menus. Food in ships got rationed, only eating what was stored and preserved for their journey. Their limited supplies include tasteless stew, onions, salted meat, hard biscuits, potatoes, carrots, and other vegetables.

Imagine eating only that for over eight months as a convict or a passenger on the First Fleet! You might lose so much weight and strength from lack of nutrition on board.

The diaries and accounts written by the passengers show the poor health and treatment standards that they had aboard their ships.

Ships during the 18th century (including the First Fleet) are highly unsanitary. Worse, medicine was still backwards in that period, not to mention that their water got polluted and infested. The germ theory has not even gotten formulated yet! Because of this, passengers got exposed to diseases, infections, and spoiled food.

Because they share tight spaces and circulated air, passengers typically spread smallpox, malaria, pneumonia, and measles. There were also cases of sexually transmitted diseases. But the “treatments” offered by surgeons and doctors in the ship are worse.

Once they had reached their destination, the newcomers got exposed to new illnesses as they tried to adapt to Australia’s harsh climate. Hundreds died in quarantine camps from typhus and other diseases. So if you were with them on the fleets to Australia, your life might have always been in danger.

3. The ships in the First Fleet, like other vessels, had a terrible smell.

Now that ships get built with steel and iron, few people know the sensation of staying in wooden vessels. But the First Fleet got composed of woods like oak and pine. These materials got embellished with treenails, spruce, linseed oil, and oakum. Moreover, the ship has resins, paint, pigments, gums, and turpentine.

At first, these organic materials give off a sweet scent. But as the oils and the wood interact with saltwater and ocean weather, they start to swell. Mould and microbes begin to reside in tiny cracks there, releasing odour.

But the problem with smell does not end with the ship itself. Your fellow passengers’ smell is worse. The passengers of the First Fleet, like the people of their time, do not regularly take a bath. Imagine smelling their sweaty stench and their unwashed clothes for eight months! Worse, they only use buckets as their toilets.

More Dark Oz: Events That Lead To The Demise Of Ned Kelly

4. The voyage of the First Fleet took several months.

The prisoners and civilians in the First Fleet travelled over fifteen thousand kilometres on the high seas. The passengers only consumed rationed meals and water while crowded in tight spaces. But the prisoners aboard the ships endured so many difficulties. If you were a convict in the First Fleet, imagine what you must have experienced for eight months:

5. There were dangerous inmates on board.

During the 18th century, Britain got plagued by criminals and offenders. It got costly to build new prisons for them. The government tried using ships to serve as prisons, but these facilities quickly deteriorated and became inhumane towards the captives. It forced the authorities to deport convicts to colonies like Australia instead.

Since the First Fleet contained criminals, many of them were dangerous people. They include rapists and murderers. If you are not careful, you might jeopardize your life and the whole crew!

If you were among the prisoner passengers of the First Fleet, your new life in Australia would have been harsh and exhausting. Convicts in penal colonies performed hard labour. Some even got chained while conducting dangerous tasks. Nonetheless, you would get freed after finishing your sentence. You would have the opportunity to build a family and survive on the rugged Australian terrain.

Stay Connected
41,936FansLike
5,683FollowersFollow
864FollowersFollow
Previous article
5 Needs To Consider When Debating For Or Against An Australian Republic
Next article
Women’s Day: The 4 Friendliest Destinations to Travel Alone

Is Bitcoin Worth a HODL?