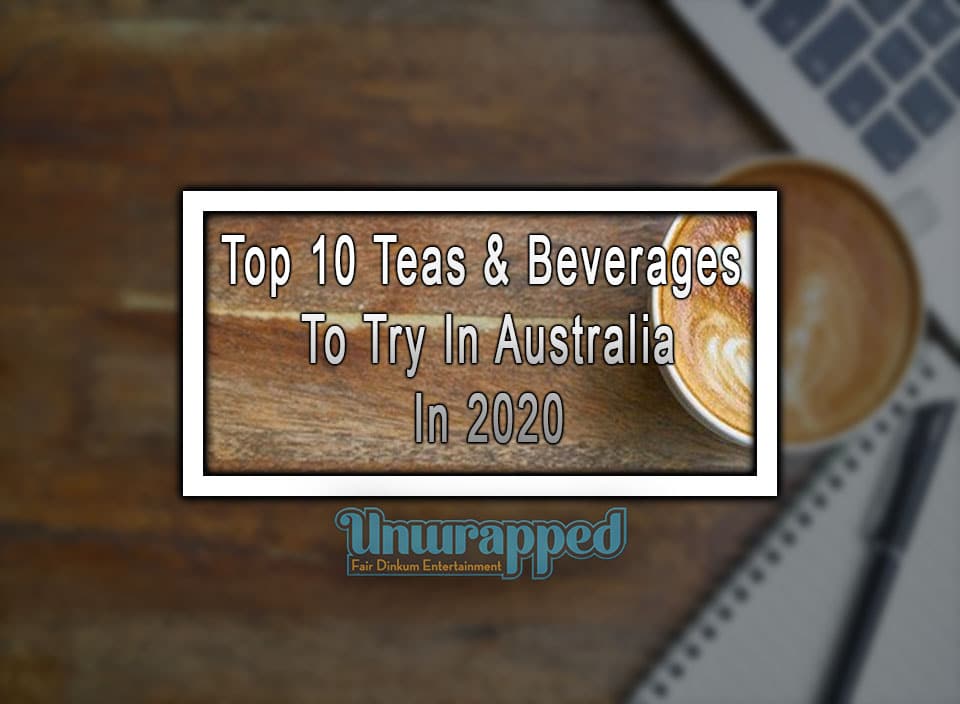 Top Teas and Beverages in Australia You Shouldn’t Miss

Food and drinks are probably the highest priority for everyone. Beyond sustenance and survival, the enjoyment of foods and drinks is what gives joy to us. In Australia, there is a booming interest in teas, partly because of the English influence during colonial times, and partly because of the health consciousness that has gripped the country. The fixation of Australians on health and wellness has spurred a growth in sales of teas. Instead of reaching for sugar-laden alternatives, Australians prefer to drink tea. There are many options for tea drinkers, from flavours to aromas and even to function. While tea is making its way to the top of the list, there are also other non-alcoholic beverages that are dear to Australians. Here are the top teas and beverages in Australia that you should not miss when visiting the land down under.

The first on our list of Australia’s famous beverages is Skin Glow Organic Loose Leaf Tea. This caffeine-free blend is mixed with organic herbs that make the skin clearer and healthier. Burdock root, red clover, and calendula have been traditionally used to relieve skin of impurities, reduce inflammation, and clear toxins. The earthy flavour combination mixed with mint tones is a refreshing blend.
Skin Glow Organic Loose Leaf Tea is made by Love Tea, a company founded in 2006 in Melbourne. The goal of the company was to provide products that promote wellbeing while giving health benefits to consumers. From Love Chai, the company was renamed Love Tea in 2012 to reflect the wider range of products that they offer. To date, they have over 20 blends of tea, each one carefully crafted and skilfully blended to ensure maximum flavour while still being mindful of our environment.

Australians are getting more conscious of their health, leading them to patronize products that are certified organic. One of the teas that are making raves in the Australian market is No. 12 Rise & Shine Organic Tea. If you like the lemon flavour in your tea with a twist of lemongrass and ginger for added zing, then this is perfect for you. The clean and refreshing taste is a good combination especially if you’re trying to be up and awake in the morning. The ginger in Rise & Shine also helps soothe a sore throat, so it’s an added benefit for those who love tea.
This organic tea is produced by Ovvio, a company committed to maintaining the holistic system of growing and handling food without fertilizers, chemicals or GMOs. Consumers of Ovvio products will be glad to know that they follow strict procedures to ensure that from paddock to plate, you only get organic and healthy products.

The first thing you will notice about this tea is the stylish packaging. Its unique bottle packing stands out among the boxes of tea that you usually find in the market. The sweet berry flavour of the tea mixes beautifully with the slight tang that citrus gives. It is made from all organic ingredients – black tea, orange peel, apple, hibiscus petals, and blackcurrant. Aside from being organic, Blend No. 6 is rich in Vitamin C that comes from the orange peel and hibiscus petals. This means that this blend helps stimulate our immune system. The unique packaging and stationery used by West End Tea Co. for their products are from the efforts of revamping the image of the brand. The company wants to reflect the calming, soothing, and relaxing way tea comforts us, as well as the organic way of handling the products “from tree to tea”.

If we are looking to try the top teas and beverages in Australia, then boba is the perfect drink to have. Boba traces its roots back to Asia, where tea is very popular and is used for different reasons. The drink uses tea as a base and when combined with fruit-flavoured liquid or milk, it produces a unique taste that is now loved by millions around the world. In Australia, there are countless boba (or bubble tea) places where you can get this refreshing drink. It is most popularly served with pearls made from tapioca, but it can also come with pudding, yogurt, lemon, and other add-ons. Different teas may be used as a base but the most popular ones are black tea, original tea, oolong, and green tea. Australian boba shops are coming up with different flavours constantly that some of the boba variants can now be desserts that we can drink.

A favourite drink among Australians that can be taken on its own or used as a mixer for cocktails is Ginger Beer. One of the most beloved brands in Australia is Bundaberg Ginger Beer. The drink is made from carefully selected locally grown dried ginger that is ground for flavour preservation. It is heated once mixed with water and sugarcane to release the flavour and spice from the ginger before undergoing the fermentation process. After the fermentation, the brew is craft filtered, leaving tiny traces of ginger in the drink. The process takes three days in order to extract the maximum flavour we can get from the brew.
Ginger beer is a popular drink in Australia and across the world. They are great to drink straight from the bottle but many cocktails can be made using ginger beer. This special drink adds the right amount of zest to cocktails and punches that you will serve in your dinner or barbecue party.

A bit of history is needed to explain the popularity of this next drink. In the 1800s, bottles of Angostura bitters which are used for seasickness, are commonly found in British Royal Navy ships. It was not clear who made what first but sailors began mixing with other drinks such as gin, ginger ale, and ginger beer. The practice spread in the colonies and soon, even children were having the non-alcoholic mix of lemonade and bitters for dinner drinks. At the turn of the century, lemonade and bitters were so popular that it is the go-to remedy for car sickness. The refreshing quality of the drink meant that it is getting famous in areas with hot weather, and it soon made its rounds among sports enthusiasts like golf players who would have it a post-game drink. Soon, lime made its way into the drink as well. While foreigners may get confused about what LLB is, it still remains as one of the top beverages in the country.

If you are looking for a refreshing night drink without the hangover that it will give you the following morning, try Brunswick Aces Hearts Blend. Inspired by gin, this is Australia’s first non-alcoholic spirit. The Hearts Blend is made with ginger, star anise, juniper, and cassia bark, balanced by Australian Wattleseed and sweet citrus. The geniuses behind Brunswick Aces wanted a drink that smells like gin and tastes like gin, without the alcohol that it contains. They had the skills and technical know-how so they developed what is essentially a distilled botanical drink. Hearts can be taken on its own or mixed with a tonic, a perfect drink for the pregnant lady or the designated driver of the night.

Figures have shown that there has been a decline in the alcohol consumed by Australians during the last decade. This may be due to the fact that some are trying to live a healthier lifestyle, some belief in moderation, while some just hate getting hungover after a night of heavy drinking. Although Australians are still some of the biggest consumers of alcohol in the world, figures are dropping down for beer consumption. This change in lifestyle has led psychologist Clinton Schultz to develop Sobah, the country’s first alcohol-free craft beer. His indigenous background played a role in the development of Sobah. The drink he developed features bush tucker ingredients including finger lime and lemon aspen. Now, people who don’t want to alcohol in their drinks, pregnant women included, have another option instead of just being stuck with water or soft drinks as their choice.

Another popular beverage to drink in Australia is this craft beer that is at 0.5% ABV. Produced by BrewDog, the brewery has been taking the lead in developing non-alcoholic beverages in the craft beer industry. The drink is made with North American hops including Cascade and Amarillo and 8 specialty malts including Amber. This pale ale is a little on the darker side in colour with the same bitterness and froth you would expect from a good beer but without the high alcohol level. The hoppy and malty quality will surely tickle your taste buds, and you will surely reach for another glass without the usual worry of getting hungover the following day.

This carbonated soft drink is a favourite among locals and one of the most favourite beverages in Australia. Images of childhood will flash through your mind as you enjoy this drink. The unique taste of root beer is from the blend of ginger root, licorice, and sarsaparilla that is combined with vanilla and molasses. For manufacturer Bundaberg, they brew their root beer for three days to get the maximum flavours out of the blend. A hit for all ages is the Root Beer Float, or “spider” as Australians call it – a mug of root beer topped with a scoop of vanilla ice cream.

The top teas and beverages in Australia give a glimpse not just of taste preference but of the lifestyle that Australians have lived in the past years. The influence of colonization can be seen in the popularity of teas in the country, but the innovation of Australians is also apparent in the drinks and mixes invented. While wine, spirits, and beer are still loved in the country, there are now more options for people who prefer non-alcoholic drinks. Local brands and manufacturers continue to reach a global scale when it comes to the beverages they come up with to meet the dynamic demands of their consumers.

What is the most popular tea in Australia?

Black tea, was found to be the most popular type of tea in Australia, with 42% of respondents declaring it their favourite cuppa. It was followed by English breakfast (30%), green tea (23%) and earl grey (18%).

Inexpensive ways to improve your home

A Complete Guide to Use Whipped Cream Chargers and Dispensers

Unique Bathroom Design for your Apartment

How to Create a Cozy and Stylish Living Room

Inexpensive ways to improve your home

A Complete Guide to Use Whipped Cream Chargers and Dispensers

Unique Bathroom Design for your Apartment

10 Tips To Make The Most of Your Alice Springs Trip

10 Best Places For Singles To Mingle In Australia | Number...