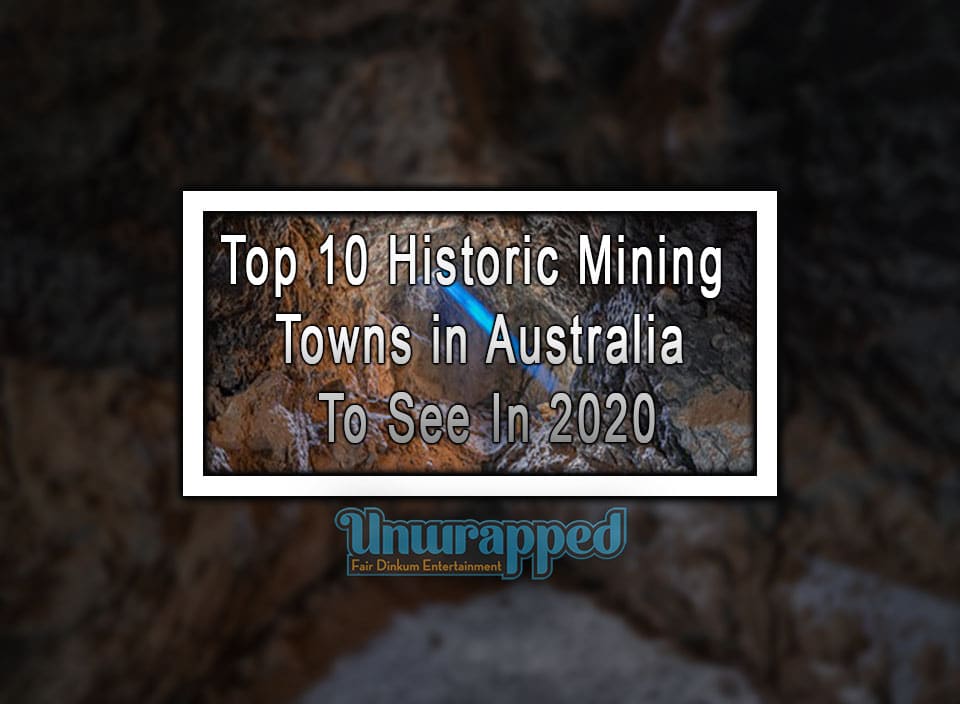 If you Google, “Historic Mining Town”, you will not find anything except a few referrals to mining towns, but you will see loads of eerie, abandoned and ghost towns in Australia. However, more than 99% of these abandoned and ghost towns once were thriving gold towns.
The gold rush in Australia lasted from 1851 onwards. While mining continues until the present day and until the unforeseen future, there are more than 60, 000 abandoned mines with a couple of them since been rehabilitated.

It is interesting to note, and you certainly have seen pictures of early history what the initial gold towns looked like. It was nothing more than tents along creek valleys and rivers. Early prospectors started to build rough dwellings from bark, blankets, hessian and calico.
Frontier settlements soon saw a development that was aimed and servicing the needs of the new tent cities. Some of the earliest historic gold cities like Ballarat had in a span of two years already several permanent public houses, churches, hotels, post office and even a weekly newspaper.
While we will not be concentrating only on gold mining, we will list the Top 10 Historic Mining Towns in Australia To See , that include different types of mines and both current and abandoned, historic mining towns. After all, humans are fascinated by what once was and not always by what is.

The largest inland city of Victoria lies 110 kilometres to Melbourne’s west, and this city was also born out of the first of the goldrush’s frantic start. The first gold was found in 1851 and by the turn of the century, Ballarat already produced 27% of Victoria’s gold. While some of the historic gold mining towns in Australia that started the same time as Ballart are ghost towns, Ballart is the opposite and a thriving town filled with the history of the era and well worth a visit.
Top attractions that attract locals and international tourists include the Yuulong Lavender Estate, Wallace Cheesery, the glorious Craig’s Royal Hotel where both Prince Alfred and Mark Twain stayed over, The Botanical Gardens, the Ballarat Fine Art Gallery which houses both contemporary artworks but also historic artwork dating to the gold rush era.
The largest attraction is the recreation of an old gold mining town Sovereign Hill which you can see at the Sovereign Quartz Mining Company. Do not neglect to visit the Gold Museum either and keep in mind that we only scraped the bottom of the barrel regarding Ballarat history in this thriving historic town that you will need a week to explore it all.

Victoria’s greatest goldfield was Bendigo which comprised of 35 reefs of gold that had a 22 million pounds total output and spanning over 360 square kilometres. Since Bendigo was the greatest, it left an extravagant mark on the city. It is certainly one of the most impressive Victorian cities in Australia. Through the riches of the gold rush, a city was built that is regarded as one of Australia’s best-preserved Victorian architecture.
Aside from the Bendigo Art Gallery will you find fine art in what once were single-fronted miner’s cottages. Visit any one of these and you will gain incredible insight into the gold rush era and early settlement. The city is built around the Central Deborah Mineshaft which has a depth of 400 metres and passing through 17 levels. This is one of the top attractions as this mineshaft is 100% restored and a working exhibit.

While it was once a thriving mining town, Silverton in New South Wales which is 30 km from Broken Hill, only has fifty people living there. During the gold rush, it thrived but when the Broken Hill mines opened, miners moved there. Silverton is a major tourist attraction for history buffs as the buildings are from that era. The buildings as well as the main attraction, the Silverton Hotel has featured in more than 200 commercials and movies including Dirty Deeds, Priscilla Queen of the Desert, Mad Max 2 and Razorback.

The tourism industry is what keeps this historic mining town going even though only twenty permanent residents live in the town. The area houses many holiday homes and the fascinating heritage buildings which are frozen in time makes it well worth visiting the mountainous mining town.

Read More: Is Iron Mining On the Moon the Future of Humanity?

Laverton is a must-visit historic town for many reasons. Since it is 12 hours’ drive from Perth, you will drive past several historic gold towns to get to Laverton which is five hours from Kalgoorlie. Therefore, will you see Coolgardie, Boulder, Kalgoorlie and 25 other gold rush sites en route.
It is more than visiting a single town but an entire historic experience simply to get to Laverton. It is one of the towns that was spared from ruin since nickel was found as soon as the gold dissipated. Here you will see an abundance of original historic architecture including the original jail, sergeants house and police station.
Visit the multi-million-dollar visual exhibit of the early history at the Great Beyond Explorers Hall of Fame which is a massive tourist attraction. Take another drive to the east and you can also visit one of the eeriest gold ghost towns of Gwalia as well.

Kalgoorlie is the Australian outback’s biggest city and its gold history is evident throughout the city. You will recognise it in the magnificent original architecture with immense mining operations, grand colonial buildings that were erected in the 1880 gold rush. The legacy of the era lives on as living testimony with the largest open-cut mine in the world, the Super Pit. Learn more of the period at the Kalgoorlie-Boulder WA Museum and while you are in Kalgoorlie you will be able to enjoy one of the outback’s most vibrant restaurants, cafes and nightclubs and an abundance of accommodation options as there is so much more to see and do.

Kookynie should be on your list of historic towns to visit and you can even enjoy a cold beer while exploring the towns rich heritage of days gone by at the Grand Hotel. What is different about Kookynie is the opportunity to walk through the ruins like the once magnificent Cosmopolitan Hotel, old shops and buildings.
One of the oldest iron and timber buildings is a still-standing Old Miner’s Cottage and see how a pioneering prospector lived. While in Kookynie, pitch your tent, stay at the caravan park or sleepover in the historic hotel to check out the rest of the attractions including the Niagara Dam.

Cue in Western Australia is an hour’s drive north of Mount Magnet and well worth a visit as it offers a surprisingly diverse history. Most of the original buildings are still proudly depicting the 1890 gold rush history. This includes the police station, courthouse, post office, government buildings, old gentleman’s club and the Cue Hotel.
You have more than enough accommodation options on your visit to Cue like the bed and breakfast, caravan park, motel or hotel. Aside from the rich gold history, you can see Aboriginal cave paintings and some of the most stunning wildflowers from July to September.

In 1851 Castlemaine was also found as one of the gold rush boomtowns, however, it wasn’t called Castlemaine at the time. It was named Forest Creek and it only changed with the population growth, but then it was called Mount Alexander. Only in 1854, it was renamed by the Goldfields commissioner in honour of his uncle.
The first gold in Castlemaine was discovered by a shepherd as it was a sheep region at the time. While there were only a few people in the town at that time, by the end of the same year close to 25, 000 prospectors have flocked to Castlemaine.
With a population of around 6000 people, it is a thriving city to visit and you will see and experience historic structures from the Victorian Era. An excellent example of gold rush relics is housed within the Castlemaine Diggings National Heritage Park.

Tyrconnell is not 10th on the list because it is the least interesting, indeed all these top towns are worthy of a lengthy visit but Tyrconnell certainly is a must-see. Unlike the rest of the towns which are town and not the actual mine, the most historic is this particular one as it is the restored old relics of mining equipment and the actual mine itself as well as the original buildings.
Today it still looks as it did back then except the prospectors and the gold is long gone. It was one of the Hodgkinson Goldfields richest gold mines. Unlike historical mining towns that are only ruins, or nothing left to see, you experience it in its originality including accommodation like camping grounds and cottages for tourists.

While Australia is filled with more than enough history and culture including excellent museums, there is nothing better to walk the streets and visit the buildings where the early prospectors once lived, worked and probably died.

What are five popular mining towns in Australia?

The Rainy Season in Australia is On: How to Stay Dry When Going Outdoors

The Rainy Season in Australia is On: How to Stay Dry When Going Outdoors

Top 10 Cheap and Cheerful Eateries in Australia In 2023