Skip to content
You are here:Home / The Vaping Industry Needs Saving – Can Trump Do it? 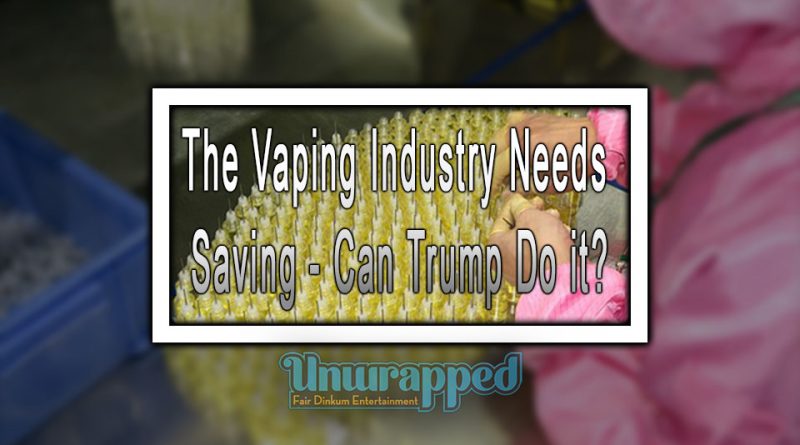 Can Trump Save The Vaping Industry?

Whether you love him or hate, Trump’s reign at the White House will be one of the most interesting. Among the key benefactors of his leadership will be the vapers who expect the president to bring in some hope to an industry that is quickly fading away at the mercy of the FDA.

Trump’s top pledges throughout the campaign era were to ‘make America great’ by bringing jobs back. Understandably, he is aware that one way to do so is to ease regulations on American businesses, including the vape industry. He could get started by repealing the Food and Drug Administration regulations approved late last year.

The regulations, signed during Obama’s final years at the Oval Office, if left in books stand to eventually wipe out the vaping industry. Marketed as an alternative to smoking, close to 99 per cent of vape products are bound to be affected by the regulations.

This has an effect not only on the potential health benefits of switching from regular smoking but also on jobs of course.

That is why industry experts have been making constant appeals to the President to fight the policy direction as e-cigs proven to aide most smokers quit.

Trump recently announced plans to carry out a reform within the FDA, making the e-liquid companies hopeful that he may establish favorable rules. The reforms appear to favor Big Pharma, which means the corporations will be able to gain control of the drug prices. The e-cigarettes manufacturers are hopeful that these reforms will shift the Big Pharma’s focus from the vape industry.

If we have to make any assumptions using Trump’s ardent position on vaccines, it is as if Trump doesn’t have the Big Pharma’s interests at heart. In fact, he wants to establish a more competitive market, lower drug prices and give pharmaceutical companies tax breaks in addition to eradicating restraining regulations.

Some top Republicans such as O’Neill and his buddy, Thiel, are both close to Trump and also have links within the vaping industry.

According to Duncan Hunter, California Republican, e-cigarettes are the best alternatives for cigarettes and could go a long way in saving lives. During a discussion on anti-vaping legislation, the Congressman literally took out his device and began vaping while the debate became much heated.

Grover Norquist is yet another renowned pro-vaping Republican who earnestly hates tax increases. Actually, he has a personal principle to oppose all tax increases. And he believes that America’s future is reliant on vaping.

Vaping is Good for Your Health

Most vapers were once cigarette smokers, which has undoubtedly been blamed for lung cancer among many other sicknesses. E-cigarettes, on the other hand, have a nicotine component extracted from tobacco but it cannot be compared to the cigarettes. It has no smoke and tar as opposed to the former.

If e-cigarettes are driven out of the market, as the new FDA rules are determined to do, will make it hard for the nicotine-addicted smokers to quit.

One of the most absurd decisions FDA made was to classify e-cigarettes as tobacco products, considering that vaping has nothing to do with tobacco. The reality of the matter is that some e-cigarettes have tobacco-free nicotine that is either lab-synthesized or obtained from other plants like green peppers and tomatoes.

Every hard-line stance was taken by the regulatory body on vaping only stands in the way for the many health benefits bound to be enjoyed by people quitting from smoking to vaping.

With Vaping, Jobs are Created

The fact that every citizen within the United States understands is that with vaping, new jobs could be on the rise. But all that is dependent on Trump’s ability to slack the FDA rules and invite more manufacturers into the American market. This could be an opportunity for young innovative companies to expand far much higher than they have ever done.

On the same note, allowing the restraining FDA rules to continue as they are would mean the end to an era for small to medium size businesses – that is nothing close to ‘Making America Great’ again.

This is a moment that Trump can seize and make an apparent differentiation between e-cigarettes and combustible cigarettes. By instigating appropriate taxing schedule, the government will be able to ensure vaping devices have the correct safety labels.

There should also be standards that guide the manufacturing of everything, right from the device to the e-juice, guaranteeing safety for the consumer market.

The R Street Institute released a report of eight proposals to the president on how the vaping industry can be saved, some of which we have already mentioned.

“The vast majority of health harms attributed to smoking rise from burning tobacco cigarettes and inhaling the smoke into the lungs, not from nicotine use,” read a statement from the report authors. They continue to advise that e-cigarettes significantly cut down on the risks of using nicotine.

We can’t dispute that none of these products is as safe as they ought to be, but they are very much safer when some comparisons are made.

The federal and state health officials will continue to oppose the industry, arguing that the e-cigarette vapour is a secondary hazard to those exposed to it. Their argument is clearly made despite a Public Health England research indicating that there isn’t any evidence of the secondary inhalers being harmed. Many vaping critics have chosen to remain silent on the positive impacts vaping has.

Health Benefits of Walking vs Running 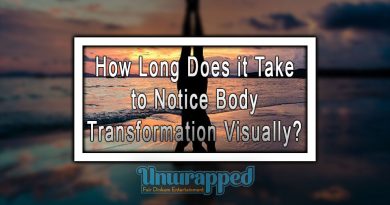 How Long Does it Take to Notice Body Transformation Visually? 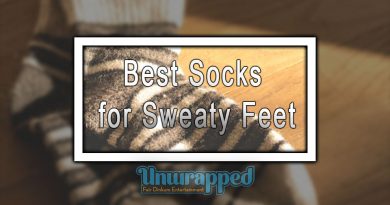 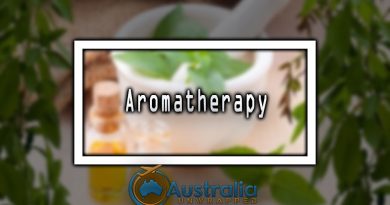 Coronavirus 2019 What We Know About It. Covid 19 Clinical Features