Skip to content
You are here:Home / The Coudenhove-Kalergi Plan: Good, Evil or Insane? 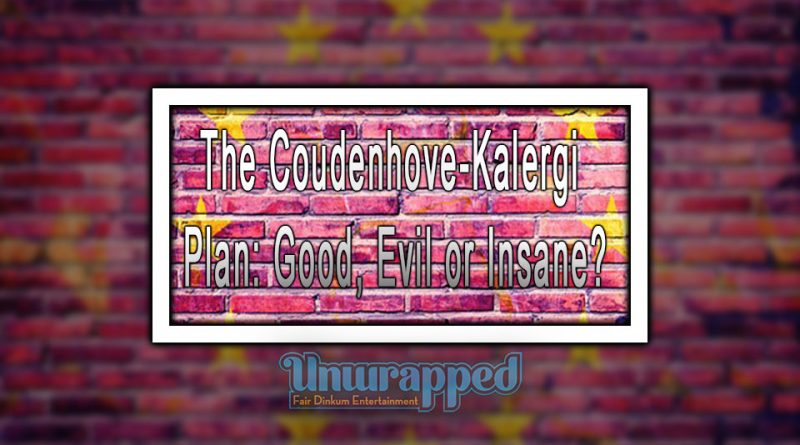 The Coudenhove-Kalergi Plan: Good or Evil?

Coudenhove-Kalergi plan – People look at the formation of the European Union as a legendary achievement after an era of World Wars. Yet when reading historical documents, we find that this was to be anticipated long ago.

In fact, pressure for creating the European Union could be traced as far back as 1920. That’s about 70 years before the actual EU’s creation.

To be specific, any major shift in human culture starts with an idea or vision. This idea was carried by Richard von Coudenhove-Kalergi.

Born in 1894 as the son of an Austrian diplomat, he was a man of mixed race. His mother had been Japanese, making him an Austrian-Japanese by decent. This is not something to be found easily in the early 20th century.

Additionally, he was of noble descent. Thus, he prominently interacted with the aristocratic class of his time.

His racial profile, social class, and the events of his time created a peculiar kind of man. Not only was he of mixed race in an era of closed societies, but he also saw both World Wars.

While he was different from the average European of time, he also got to see Europe at its worst.

Those were times of great change, as not only it signalled the end of colonialism. Also, it was the beginning of the age of globalism.

This has led him to adopt ideals of a united Europe, free from war and racial divide.

A mixed-race and unified Europe.

Let’s start with the unified Europe part. Coudenhove-Kalergi saw that world should best be divided into 5 nations. Each nation would approximately take over a continent in the unified rule.

His idea of Pan-Europeanism was actually globalist in nature. New world order is what people typically call it today.

As for the racial aspect, Pan-Europeanism promoted racial diversity. The idea of a single white race was rejected by Coudenhove-Kalergi.

We can see this through some of his works on the matter. The translated texts (we could find online) of his book “Practical Idealism” claim the following…

“The Eurasian-Negroid race of the future, similar in its outward appearance to the Ancient Egyptians, will replace the diversity of peoples with a diversity of individuals.” (1)

As you can tell, both ideals are subjects to a great deal of controversy today.

If we look at the sociopolitical arena of the West, we find a clash between white hegemony and diversity. One tends to be a conservative right-wing stance, the other more leftists and socialist.

It is the hot topic of today’s politics if you think about it. The public struggles faced by Europe’s politicians today center around certain key issues. Those would be refugee immigration, Brexit, and minority rights.

In fact, minorities today in Europe have more rights and power to influence Europe than ever. One example would be the legalizing of gay marriage. The vicious treatment of racial remarks on today’s media is another example.

You could say that today, intolerance towards minorities is “intolerable”.

Each side is bound to look at Pan-Europeanism differently. Conservatives see it as a nightmare, a possible invasion into Europe’s age-old white culture. The socialist stance is more open arms and welcome, rebuking the conservative stance.

As heated as the debate between both stances is, we don’t think it’ll end soon. Expect it to be around for decades to come.

As outsiders, we’d prefer to chime in on the dynamics of the situation (we’re in Australia if you didn’t know). We won’t be making value judgments, so we’ll try to be rational.

You see, the idea of Pan-Europeanism is riddled with conspiracy theories.

It’s necessary to consider that the majority on each side of the debate don’t have a conception of Pan-Europeanism’s origins. The stance of most on each side is based on the events of the past 10-20 years.

By such events, we mean the rise of terrorism, immigration issues, and the influence of minorities. You can also financial and labor market problems of the EU into the mix.

Coudenhove-Kalergi: A Past of Struggle and Support.

Coudenhove-Kalergi didn’t fail in his mission for a unified Europe. He had the necessary connections and aid to help him support his ideas.

After all, his ideals were praised by many European icons of the time. Albert Einstein, Sigmund Freud, and even Winston Churchill admired his efforts. He even communicated his efforts to major financial players of the era, like Bernard Baruch.

This has led to the promotion and creation of the International Pan-European Union. It still survives as an organization to this day. The organization promotes a unified Europe, operating independently of political parties.

Coudenhove-Kalergi also met many obstacles in his attempt to spread his ideas. The outbreak of World War 2 led to the rise of Nazi Germany, and the annexation of Austria. Being a resident there, he was forced to flee to Czechoslovakia. He then went to France, and finally the US until the end of the war.

In fact, Germany had banned his organization in 1933. The organization was reinstated again after the 2nd World War’s end.

You see, the ideals of Coudenhove-Kalergi were opposed to the ideals of Hitler. Do remember that Hitler promoted extensively the idea of a special “Aryan race.” He desired to eliminate all others. This has led to the persecution of Jews, Africans, LGBT, and others during the rise of Nazi Germany.

Do note that the words of Richard Coudenhove-Kalergi aren’t actually easy to get. They’re in German and are held tightly by Masonic Lodges in Germany.

The difficulty of getting his works has created an odd legacy in Europe. Some perceive him as part of a New World Order, attempting to eradicate white people. Others see him as a hero of the new world, a social pioneer of a new Europe.