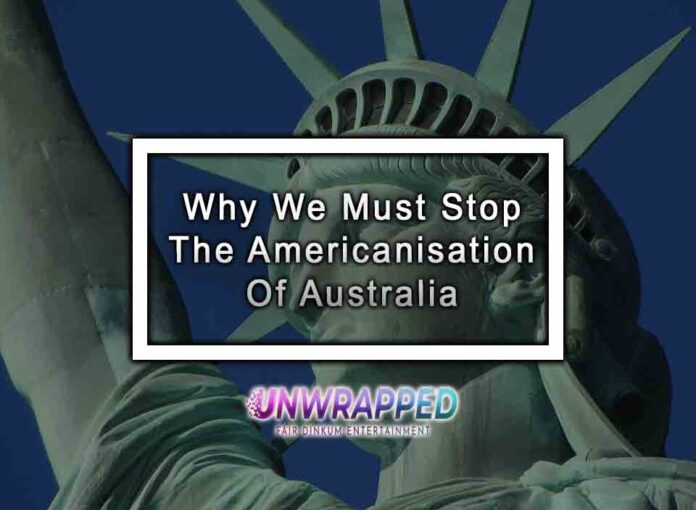 The Americanisation of Australian Culture

Australians and Americans have been in good political and social relationships for years, so we have nothing against the USA. However, we are against certain “new breeds” of social development. You know, “woke” culture, political correctness, monitoring citizens, “cancel” culture, all that vegan stuff, and much more the new generation has brought, or better yet, forced down our throats. We say no. We do not want that in Australia. We still want our freedom of speech and freedom of, well, everything that’s within the law.

Not to Miss: Why are Some People So Obsessed with Woke Culture?

These “new social breeds” originate mainly from Los Angeles and San Francisco, or we can say California altogether. We cannot let laid-back, free, and chill Australia turn into that monstrosity. Remember how we fought our own government for trying to impose Covid quarantine on us? For trying to take away our basic human rights! Remember those brutal protests and police using excessive force on us, the people? That’s us; we don’t let anyone impose their will onto us and ruin our peaceful, still normal lifestyle.

However, unfortunately, this is starting to change drastically. We fought our own government as if it was some great battle from Game of Thrones, yet we allowed another government to just barge in and tell us how to live and what we can and can’t say. What’s worse, our younger generation has now mostly turned American. And by that, we mean the negative stuff of American culture, not the good stuff. And there’s plenty of good stuff, too, don’t get me wrong. But it seems that the new generation is louder than us. It looks like older folks have just sort of given up. Plus, much of this is spread through social networks, and Gen Z uses them more than they do their own brain. While the rest of us don’t use it as much, and we also grew up in a different era, so to speak – an era where you were taught to use your own head. And, sadly, it wasn’t that long ago, either. How did it change so fast? How did young Australians become so obsessed with “woke” and PC culture?

Well, first of all, as we mentioned – social networks. Secondly, all the celebrities from California who are, of course, faking to care about all this stuff so they wouldn’t get cancelled by Twitter. And our youngsters believe them and almost worship them. We’re not into conspiracy theories, but who knows, maybe this is exactly what the US wants – to turn us into them. But we aren’t the same and never will be. Still, nowadays, God forbid, you say that you’re pro-life. You’re immediately labelled as a “bigot”. It appears that that’s their favorite word, as if they don’t have any other words in their vocabulary. Well, let me explain this to you – no, I am not a “bigot”. And I have nothing against abortions either. I just want my right to free speech! If you can have it, then why can’t I? But no, they don’t want to listen to your opinion or even get into a normal discussion, a constructive dialogue. They label you, and that’s it – period. We don’t get to have an opinion anymore. And if we don’t stop this soon, our chill little continent will become the fake world of Hollywood.

So, how do we change this? What do we do? Simple – stop being afraid to express yourself and being labelled as whatever. Fight back. Talk back. And eventually, trust me, they’ll realize that they can’t just take us over. That we’re still Australia we used to be – a beautiful, free country!

Must See: Why Humanity Must Allow Freedom of Speech to Return

Stay Connected
41,936FansLike
5,682FollowersFollow
816FollowersFollow
Previous article
Why Humanity Must Allow Freedom of Speech to Return
Next article
Woke Culture: What Is It And How Is It Affecting Our Society?

When Will Wokeism End? – It is Good or Bad Ending

What Did Trump Say About Being Woke?