What Happened On Shrove Tuesday In The Bible? 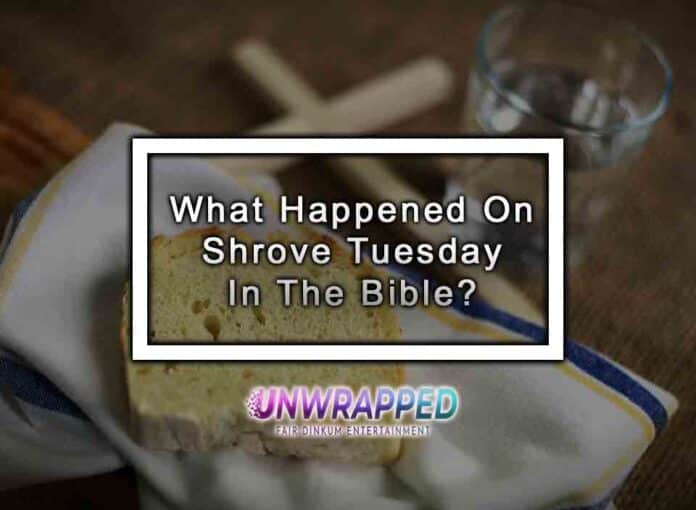 Shrove Tuesday is the feasting day that comes before Ash Wednesday, which then marks the start of Lent, where Christians follow the tradition of fasting for 40 days. This day is set aside for confession, absolution, and penance. It is traditional for Christians to clean out their kitchen of all foods that might tempt them to breakfast, so on this day, Christians all over the world choose to eat and make pancakes in preparation for forty days of fasting. So what does the bible say about Shrove Tuesday?

The History Of Shrove Tuesday

For at least a few hundred years, it has been customary to recognize the beginning of Lent by feasting on pancakes and other fattening foods. The Shrovetide celebration continued until the beginning of Lent in the late Middle Ages. The eating of pancakes or other dishes prepared with both the fat and eggs, as well as the fat that was forgone during the season of Lent, was common in many early Christian communities. Shrove Tuesday pancake eating has a specific ritual that dates back to the seventeenth century among British Christians.

Christians are free to observe Shrove Tuesday if they so choose; there is no biblical requirement to do so.

Another custom of Shrove Tuesday, in addition to feasting, is for Christians to confess their sins in order to begin the Lenten season. An ancient paragraph says that in the week preceding Lent, everyone should see their confessor and confess their sins and wrongdoings. The confessor should then pronounce them so that they might hear from their actions what the sinner needs to do in the manner of penance, according to a rule established by the Ecclesiastical Institute around 1000 AD.

The striking of the bells (sometimes referred to simply as the Shriving Bell) to “call the devout to repentance before the somber season of Lent” and to “start the cooking of pancakes.  Some churches additionally burn the palms that were dispersed at the Palm Sunday ceremonies of the preceding year to create the ashes that will be utilized during the Ash Wednesday ceremonies the following day.

Traditions Are Observed During Shrove Tuesday

In addition to offering Christians the chance to enjoy one last celebration before the ascetic season of Lent, which is marked by making a Lenten commitment, fasting, worshiping, and many spiritual disciplines, including having to check a liturgical planner and having read a daily prayer, Shrove Tuesday also serves a dual purpose of inspiring believers to confess their transgressions before the commencement of Lent on Ash Wednesday.

Shrove Tuesday is associated with pancakes as a method of consuming fatty foods like eggs, dairy, and sugar before the 40 fasting days that make up Lent. For devoted Catholics who observe the Lenten fast, simpler foods must be consumed while avoiding meat, dairy, and eggs.

On this day, the last day of the Shrovetide period, many Christians, including those who practice the Anglican, Lutheran, Methodist, as well as Roman Catholic faiths, place a strong emphasis on self-awareness, reflecting on the sins for which they must repent as well as the advancements in their lives or areas of spiritual development for which they must seek God’s guidance.

Shrove Tuesday is also the day on which many Christians decide what commitments they will make for Lent throughout its 40 days. It is beneficial to pray for strength when making a Lenten sacrifice, as well as to encourage other Christians who are fasting.

Read More: Books On How To Study The Bible?

Lent is a time of penitence and fasting leading up to Easter. The 40-day time of abstinence and fasting except for Sundays is observed in Western churches beginning on Ash Wednesday, approximately 47 days before Easter, in remembrance of Jesus Christ’s forty days of hunger in the desert prior to the start of his earthly ministry.

The start of Lent in Eastern churches occurs on the Monday of the 7th week before Easter, and it lasts until the Friday that really is nine days prior to Easter. Saturdays as well as Sundays are included in this 40-day “Great Lent” as periods of lenient fasting to remember what Christ went through in preparation of ministry.

Since the time of the apostles, people have probably observed a period of fasting as well as preparations before the Easter holiday, though the custom was not codified prior to the First Nicaea Council of 325 CE. Applicants for baptism were being prepared throughout this period, and those who had been barred from Communion due to grave sins were also making preparations for their reinstatement by making amends and praying daily. They were doused with ashes and clothed in sackcloth as a token of their contrition. When this type of public penance started to disappear in the ninth century, it became traditional for all believers to receive an inscription of ashes on their faces on Ash Wednesday to serve as a reminder of the necessity for penance, as the church saw that most people did not possess the discipline required to fast for 40 days.

Early fasting regulations were stringent, and they remain strict in Eastern churches today. There was just one permitted meal every day, and beef, seafood, poultry, and dairy were off limits. The consumption of alcohol, oil, or dairy products is likewise prohibited by the Eastern church, which still maintains the strict Christian guidelines put forth by the first Christians. These fasting regulations have progressively been loosened in the Western denominations. Following the stringent prohibition on fasting amongst Roman Catholics, just Ash Wednesday and Good Friday have become observed as Lent fast periods. It is nevertheless important to engage in penance behavior and charitable giving, and many Catholics follow a vegetarian fast on Fridays throughout Lent.

Shrove Tuesday has been a Christian tradition for hundreds of years, and while most Christians don’t observe days of fasting like the early Christians did, most still cook pancakes and initiate festivities the day before Ash Wednesday as a way of keeping that age-old tradition alive.

More Reading: What Happened On Easter Monday In The Bible?

What Happened On Easter Monday In The Bible?

What Does The Bible Say On Divorce?

What Are The Most Popular Bible Verses?