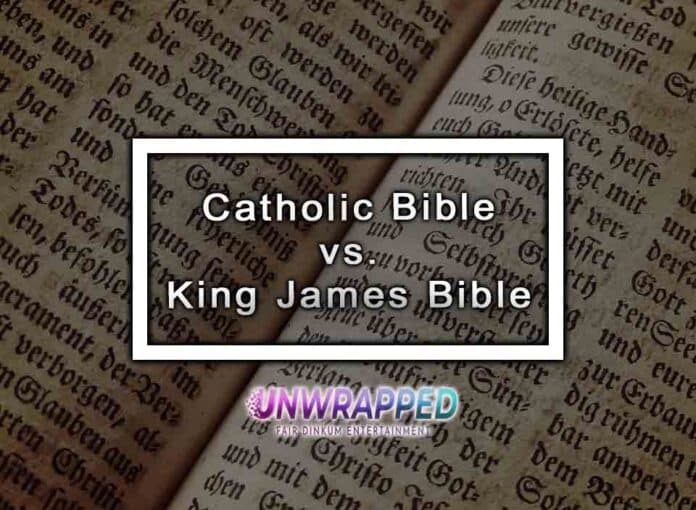 Roman Catholics, Protestants, and other Christian denominations use different Bibles. Dozens of Bible versions have been in use for several decades, but the two most popular releases are the Catholic Bible and King James Version Bible.

Several differences exist between both versions of Bibles and users commonly disagree on the content of texts in other releases.

Many denominations stick to the Catholic Bible due to its generic acceptance but others prefer the much older King James Bible.

In this article, we’ll see several differences between both Bibles along with some notable similarities.

Also see: Bible Verses On How To Pray To God

Mentions of God and Additions

Catholic Bibles mention God in its text, as the Book of Esther has multiple additions to its content. However, the King James Bible does not mention God once since it is based on early Protestant translations.

Apart from The Book of Esther, Catholic Bibles originally had over six more books than King James translations.

King James I ordered the translation of Hebrew, Greek, and Aramaic texts of Bibles in 1611. The first Roman Catholic Bible became available in print from 1790, even if earlier versions were available in the 16th and 17th centuries.

The Ten Commandments in earlier versions of Roman Catholic and King James Bibles are different, even if many people don’t take notice.

But it’s worth noting that revisions to both Bibles have largely harmonized these verses. However, the original translations of both texts had different interpretations of God’s Ten Commandments.

The Apocrypha (as the extra books are called) is a collection of books about several events in Biblical times. These texts

Must See:  What Does The Bible Say On Divorce?

The Council of Trent

16th Century meetings of the Catholic Church gave birth to several conclusions and additions to Biblical texts. One of such conclusions in 1546 made books from Jerome’s Vulgate as scripture.

Early Bible publishers did not consider these books. However, these texts received much attention from Roman Catholic authorities.

The council’s resolutions did not affect King James versions of the Bible, hence the notable differences between both books.

Catholic Bible vs. King James Bible vs. Other Versions

There are 20+ versions of the Bible apart from Catholic and King James Bibles. These versions have several differences from both Bibles and typically offer different translations of recovered texts.

For example, the Clementine Vulgate Bible (by Pope Clement VIII) moved three Apocryphal books from the Old Testament into appendixes. The revised Vulgate Bible also has several differences in style, context, and delivery from Catholic and King James Bibles.

Several versions of Luther’s Bible also moved epistles like Hebrews, James, Jude, and Revelations to the end of the New Testament.

The Catholic Bible vs. King James Bible might have several differences, but they both share one common thing – the good news of God’s Word. Both translations and many other interpretations continue to transform lives around the world.

You can pick any of these bibles or get both for a double dose of God’s Word to build you up and keep you ahead.

Must Read: Bible Vs. Quran

What Does The Bible Say On Divorce?

What Does The Bible Say On Drugs?